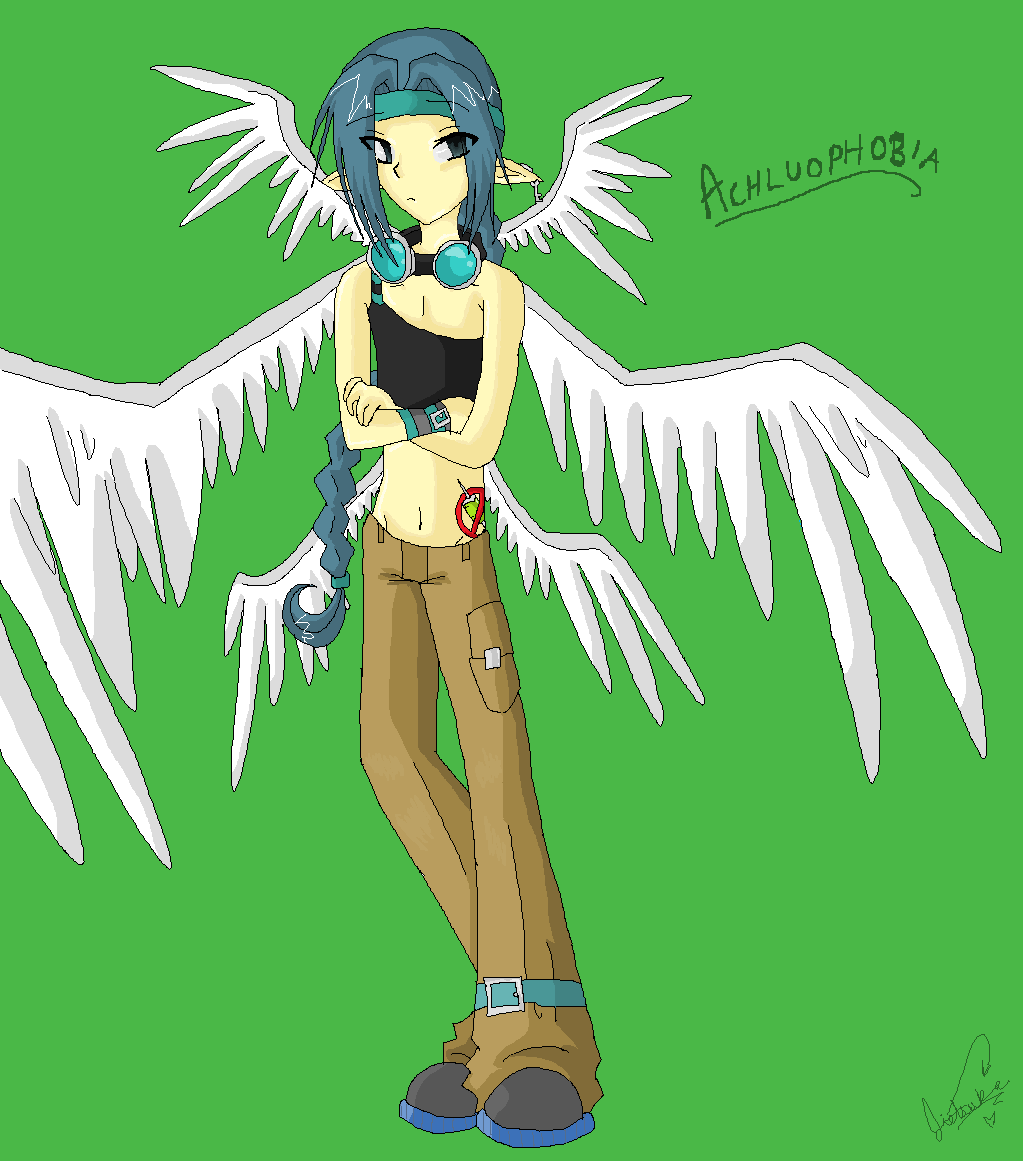 Markings: Tattoo of a red "Prohibited" circle around a syringe.

Job: Secretly a member of the resistance

Past: Had been taught through his life not to care for any species other than angels. A bit less arrogant then the others, he felt the need to do something about EMINC, so he's joined the resistance without the knowledge of any other angels...

Behavior: Calm most of the time, Thinks through every detail of something before doing it, Analyzes all possibilities, In other words he's careful. c:

Fighting Style: He only fights, attacks, anything like that, when he's been commanded to, He does think on his own when it comes to rescueing experiments, and tends not to follow orders when rescuing...

Family: Father- agrees strongly with EMINC and hates all members of the resistance
Mother- Neither likes nor dislikes EMINC. Chooses to support it for her husbands sake though.
No other family members...

Friends:His friends solely consist of other members of the resistance, he wants nothing to do with any other angels, in fact he hates most of his species.

Powers: He can fly, obviously, There's nothing all that special about him, His eyes change color at times, according to his mood. :/

Personality: Unlike most angels, Achluophobia is not very arrogant, He likes to take the lead in things. He's always hated hearing about EMINC, and began to despise the scientists and everything about them. He decided at age 16 to take some sort of action to help fight against EMINC, so he became a member og the resistance. Hes become a leader in forming operations to free experiments, and in trying to mess up things in the laboratories, He refuses to stop fighting until EMINC is no more... He's usually calm, but during operations he goes a little overboard and chaotic. <xD

I hope that enough info about him <xD
Sorry if there's 50,000,000,000 typos c:
Sorry, Vikki, I'm trying to finish these entries before the deadline <xD But I am working on your birthday picture c:

MKAY I DO THAT NOW! -splodes-
C: Gosh, I love this character you made for Sista Kaj Luzzu-san. -nods nods-

*shakes fist* You actually have time for entering contests xDDD WHYYYY??!?!
But anyway, beautiful work as always Luz c: I love your clothes with their 'oh so retro/new wave' look xD O YA, I DESCRIBE WELL. And that hair is awesome <3 Gosh, that's like my dream hairstyle xD Nice work Luz! *runs off to the next pic*

I'm sure you do great, Kylie :D
Thank you~

......his hairstyle reminds me of sorax3

c:
Thank you for holding such a fun contest xD

xDD
Why Thank you very much Kaj c:

Interesting.
By the way,can I ask you something:If there was a character in your story who had wings that looked like angel wings but were a different color,(such as Indigo,magenta,dandilion yellow,lilac,sapphire blue,blood red,Jadde green...ect),would they still be classified as an angel? Or would they be considered a sub-catagory?

Also why do the angels in your story only have white or gray wings?

If there was a character that seemed human except they they had three large pairs of dragonfly wings & their lower torso was like that of a snake,what species would they fall under.

And lastly:If a character in your story was found out to be gay,bisexual,or intersexed(you know,having both male & female genitals),how would they be viewed in that world?
Would they be outcasts,considered genetic defects, or just accepted?

Sorry for asking so many questions but this story sounds kind of thrilling.

Oh, actually, I'm very much not the writer of this story ^^;
I'm only one of the people entering the contest <xD

But I'm sure Kaj (ElevatorMusicINC) could help you out with the answers to those, much much more than I c:

Wow owo Good job! I like the pose.. and the WINGS!

*adds his shirt to shirt collection* >:3