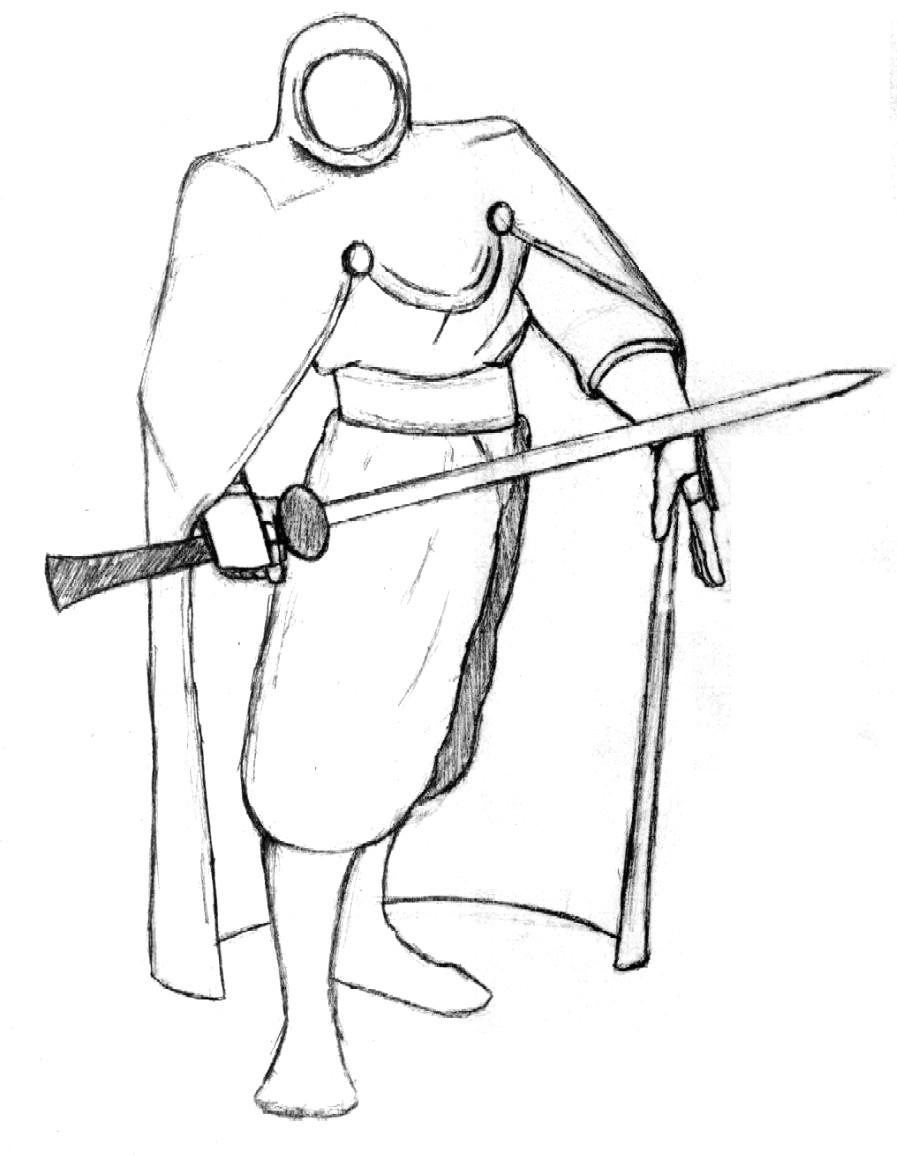 Here’s a full picture of what the character’s outfit looks like.

Like I said before I’ve been working on this character since late 2002. Some of the first few drawings I had of this character (which I don’t have any more) showed him in a skintight outfit and a cloak that looked more like a normal hooded cloak where the hood looked like an upside down “U” or “V”.

In mid 2003 I started not to like the way he looked. To me he looked too much like a Vampire Hunter D rip-off. I still kept the hooded cloak but the outfit went. I didn’t want the outfit to be skintight… but what it was going to be and look like I didn’t have any ideas at that time.

Then in early 2004 I had this dream, and one of many things I’ve been able to do since I was little is remembering what dreams I have. In the dream I saw this person… this man in black fighting these big bat like creatures and fighting them with a sword and he was really moving fast it was like watching a live-action Anime character fighting. He was big, tall, had broad shoulders and looked like a pumped up Rind Wraith from the “LOTR”.

So I changed the outfit to look like a black Japanese or Chinese Shinobi shozoku or Tunic with a long wide black obi belt that is wrapped around his waist. His pans are Ninja or Samurai trousers… I think there called Matabiki. I either give him black Ninja tabi boots or just plan black boots. The hood of the cloak I made round like a circle and that the cloak would be held on his chest by two round sliver medallions like buttons.

I wanted him to be built but not like the type of character that has all these big huge muscles everywhere.

In this picture I have him opening up his cloak to see the rest of his outfit.

The sword he’s holding, I wanted him to have a perfect type sword. Where it’s not too wide like a bronze sword and not too thin like a rapier but something in-between like a Chinese sword. So I found two pictures that I base the sword on.

I do have few sketches of him with his hood down showing what his face looks like.

You are not authorized to comment here. Submitting comments has been disabled or restricted on this page