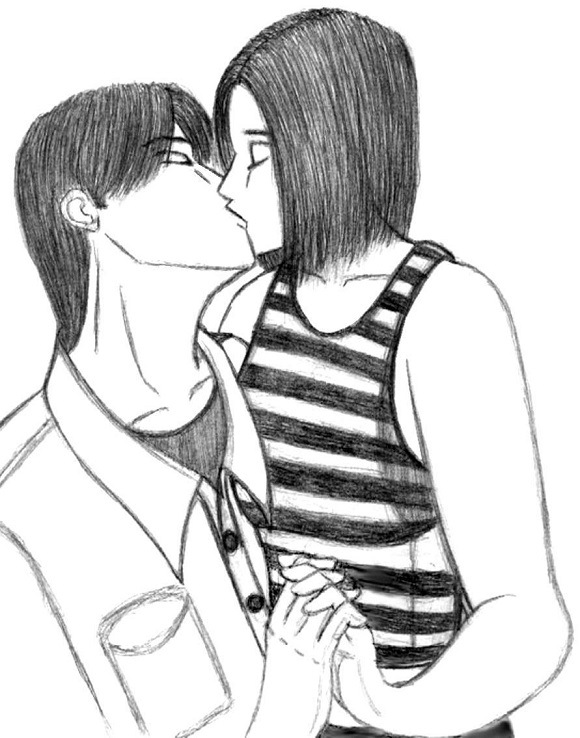 Picture
I was going to show more of their bodies but I decided to just show their chest (part of their stomach's as well) to their head's. If I were to draw their whole body, we would see Eileen sitting on Henry's lap. This picture of these two would be months after the Escape Ending, I see these two being a very loving passionate couple and helping each other over the events that happen to them.

I was either going to show Eileen in this outfit or her in the purple dress, what she looked like after waking up in Walter's nightmare world. The idea behind that picture would be that Eileen at that moment thinks that her scars and bruises are going to be permanent, that no one will ever want to look at her or be with her and that she won't be able to look at herself. But Henry disproves that by kissing her deeply. Henry is showing and proving to her that he doesn't care what she looks like, he would still want to be with her, look at her, kiss her, touch her, make love to her and so on.


Henry/Eileen
Henry was a perfect gentleman to Eileen and to everyone he met, they got along very well with each other due to the fact that he spoke very calmly to her, he was polite, and they never got mad or annoyed with each other. He kept her save behind him the whole time when Joseph showed up. The fact that Henry brings Eileen a bouquet of flowers in both the Escape and the Mother Ending shows that he cared, that they can have a future together, that it's the beginning of a relationship. Having similar personalities and attitudes is makes a couple work, it's what makes it believable.


Henry and Cynthia don't Mix
I've seen a few people who some how think that Henry could or should be with Cynthia. Well, that wouldn't be possibly because not only is she dead, Henry didn't show any feelings for her, but also it's the same thing I've said about Leon and Ada, opposites don't attract. From what was shown, they don't have anything in common, their personalities and attitudes simply didn't match. The way Cynthia dressed, acted and even walked (one foot in front of the other, as if she's on a fashion runway), she very much gave the impression that she's a whore. Within a few seconds or a minute of meeting Henry, she was already offering herself to him, she did think it was just a dream... but still.


Murders and their victims don't Mix, neither do kind women and Assholes
Then there are people who think Eileen should be with... Walter or Richard. Somehow a sadistic psychopath and one of his nearly beaten to death victims make a good pairing... somehow Eileen would have no problem having bloody bruises all over her, likes having a smashed eye, a broken arm, numbers carved on her back and that Eileen would like a man who has killed children... to these people… all of that somehow means love...
http://vignette2.wikia.nocookie.net/silent/images/4/4f/Eileenback.png/revision/latest/scale-to-width-down/1024?cb=20150520033659

Or that a person like Eileen would want to be with someone who was nothing more than a rude impatient jackass. They only have one seen together in the whole game and their conversation is pretty mutual. Richard had such a short fuse, that he couldn't even handle a small kid (Walter) wondering around the apartment building or beats / rapes someone for simply bumping into him.
Another Crimson Tome:
"Hey, Richard's gone nuts again."
"He lost his temper this time."
"I'll bet next time will be even more fun."

The residents of South Ashfield Heights enjoyed talking about him. He was famous for his short temper.

The worst incident was when Mike, the resident of Room 301, bumped into Braintree's shoulder in the corridor of the apartment unintentionally. At the time Richard was even more moody than usual. He yelled, "Who do you think I am?", and dragged Mike by the collar of his shirt into his apartment, Room 207.

"Not again", said the crowd from the apartment, and they went to Room 207 to see what was going to happen. Suddenly, the door opened and a stark-naked Mike came out of the room. Right after that, Richard came out of the room, holding Mike's shirts and jeans soaked in blood.

"How do you like that, you sick little freak? You had it comin' to you!", said Richard as Mike ran away from him. Richard threw away Mike's clothes and said, "These clothes are disgusting. Get 'em outta my sight!"

Then a middle-aged woman in the crowd said, "I know... It'll be perfect to wrap his body in", and she took the jeans.

"Hold it. Hold it... I think I'll keep that one for myself", said a drunk, and he took the shirt.

After that, Richard took a look into the crowd and noticed a little boy among the crowd and yelled, "You! You snoopin' around again?! Get your @$$ outta here before you really piss me off!"

It's not surprising that they never state any of this, otherwise they would actually have to admit that it's not believable. The two main excuses are that Richard has every right to do such things or that Eileen would be possessed... right, she needs to be controlled in order for a pairing like that to work... idiotic head-canon simply doesn't cut it. From what I've seen, the majority of these kinds of fans seem to be Goth/Emo female players or just typical retarded fangirls (many from deviantart, tumblr, facebook, twitter, reddit, and instagram, you know, the gutter trash of the internet). There seems to be a large majority of people who don't have a problem with a person like that, although I would like to think that there's more who are against people who act that way.
https://www.youtube.com/watch?v=hU1mXS0KgqA


Deaths
Walter actually killed more innocent people (12 in all or 15 if you count Henry, Eileen and Frank) that had nothing to do with what happen to him.

In the worst ending:
Henry Townshend: In the 21 Sacraments ending, a corpse believed to be Henry's was found in Room 302, mutilated beyond recognition.
Eileen Galvin: Bruises all over the body, right eye smashed in, left arm broken, and numbers carved onto her back. She was the only person who survived Walter's brutal assault. In the 21 Sacraments ending, she died at the hospital.
Frank Sunderland: If Walter completes the 21 Sacraments, he will have killed Frank as well. The cause of death isn't specified, he's just found dead.

The 12 victims:
Joseph Schreiber: Although the means of his murder and location of his body are officially unknown, Joseph apparently never made it out of his room and became Walter's 15th victim.
Cynthia Velasquez: Stabbed to death.
Jasper Gein: Burned to death.
Steve Garland: A pet shop owner murdered with a sub-machine gun in his store and Walter brutally killed all the animals.
Rick Albert: A manager of a sports equipment shop battered to death in his warehouse with a golf club.
Billy Locane: An elementary school boy who along with his sister were killed with an axe.
Miriam Locane: Unlike Billy, who was killed with a single blow from an axe, Walter brutally dismembered Miriam's body before removing her heart (this reminds me of what happen to John Walsh's kid).
William Gregory: Stabbed repeatedly with a screwdriver.
Eric Walsh: A bartender shot in the face.
Peter Walls: A high school student beaten to death.
Sein Martin: A high school student strangled to death.
Sharon Blake: Drowned to death. Sharon was a middle-aged housewife whose family was being held hostage by the Order in Silent Hill. After reading about the strange occurrences at the Wish House she decided to go and investigate, concerned for her family's safety. Walter, who drowned her, caught her whilst on her way through the woods.
https://www.youtube.com/watch?v=ISMfZ4fSUU8
https://www.youtube.com/watch?v=-HGXFWK4MKg
Walter is pretty much 7 of these people combined

Joseph Schreiber said it best
"Now, he's become nothing than an inhuman killing machine."
"You must kill him"


No excuses for Walter
Some people think Walter had the right to do that just because he had it rough when he was a kid... whenever I hear people say that they feel sorry for Walter… they never mention the people he killed or how he murdered them... do these people talk and think this way with real life murders???? It's said that serial killer and rapist Ted Bundy received over 200 love letters a day from women who felt sorry for him, one even married him... another woman married serial killer and rapist Richard Ramirez while he was in jail...
https://www.youtube.com/watch?v=clTzKHLbD1U
https://www.youtube.com/watch?v=wVv_lvaGYWE

Walter is of course a fictional character, no one has really died, but he's a fictional psycho, sadist and murderer with no redeeming qualities. He's not a misunderstood tragic character or even a relatable one in anyway, he's a supernatural serial killer who possessed Eileen to feel pity for him, he wants to be felt sorry for. Walter is trying to justify himself, to the point where he tried to make Eileen kill herself by walking into the killing machine. All because of what he wants, he wants to make himself feel better. If we're going to take the SH storylines and characters seriously since the series takes itself very seriously, then we need to take such things as assault and murder seriously.


Ages
This is something I have to bring up because I've seen this idiotic compliant with these two, while Henry's exact age has never been stated, it's said that he's in his late 20s, Eileen is said to be 23, but as always in this day and age, some people seem to think that this is an underage couple or something close to statutory rape... these people must think that if your not the same age or at the most one year apart, it's a crime...


Final Thoughts
I don't mean to say so much about the characters and the story, it's just a video game, I'm not saying it's the best game or the best SH game, but I just don't see anyone defending this game or Henry and Eileen because the complaints some people have for it are just idiotic. I'm not expecting everyone to like it, it's not perfect, there's room for improvements in the writing with the characters and scenes in the game... but I don't see that happening since some of the newest SH games have been mediocre or just plain terrible and the slash shoot... that is just the way this sorry @$$ generation thinks with everything...