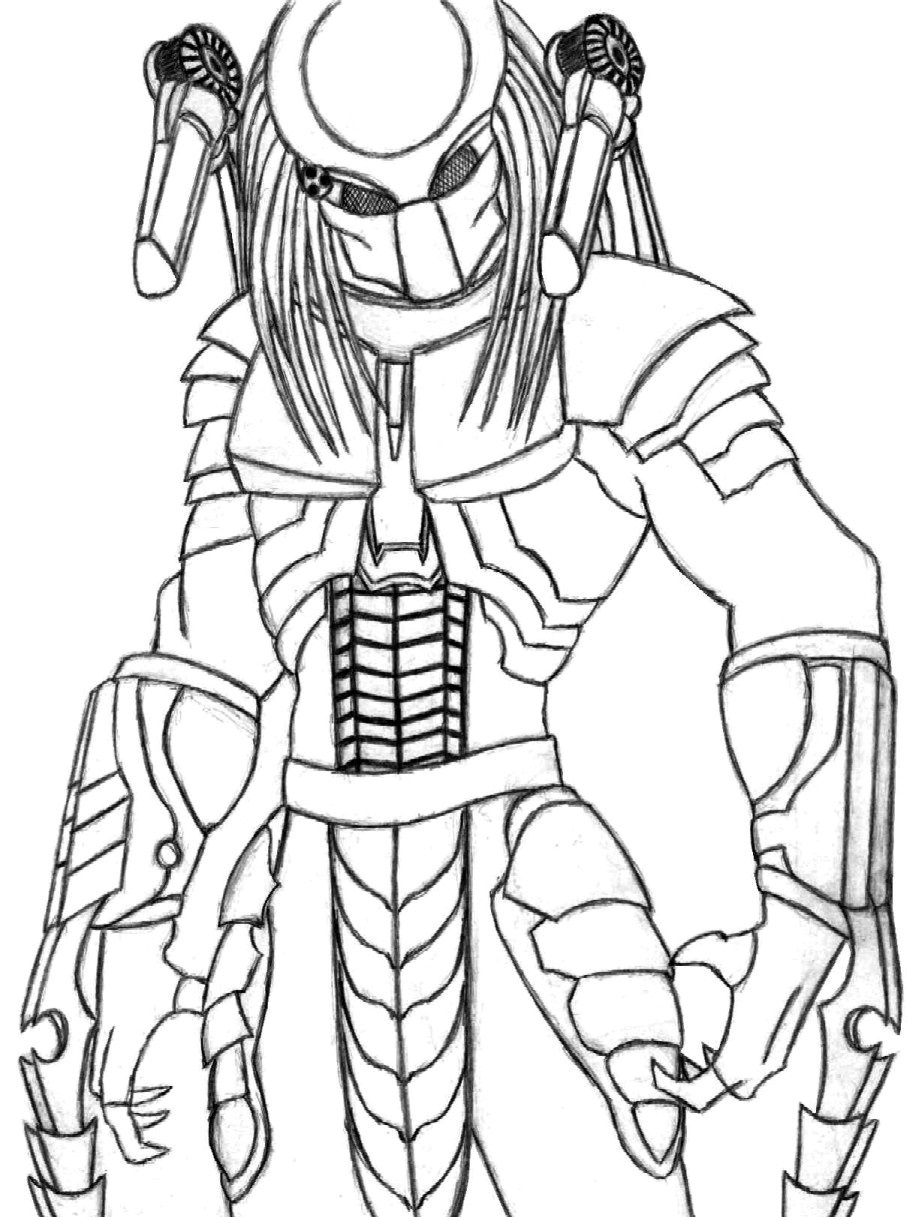 Picture
The brutal but honorable humanoid alien hunter and warrior of the Yautja species that are 7 or 8 feet tall, The Predator… but this Predator is a mix between 4 of them.

Jungle Hunter: The mask and the plasma cannon is the type from the 1st film.

Scar: His dreadlocks are a little longer like Scar’s and the chest armor is somewhat similar to the type that he wore in AVP.

Wolf: The Veteran called Wolf in AVP2 ended up using two plasma cannons on each shoulder.

Dark: His wrist blades are bigger and longer like Scar's but Dark had wrist blades on each arm and that was seen in the 2010 Alien Vs Predator video game.


Films
I watched the first Predator film a lot when I was a kid. The plot to Predator is pretty simply, there's this humanoid warrior and hunter alien that's come to Earth, he's going to watch, hunt and kill anyone who's worthy of a fight like a Special Forces team. He's going to kill them one at a time, take there bodies, skin them or rip out there spinal cord and take their skulls for trophies. He will only attack those he saw that were armed with a weapon.

I watched the first Predator film a lot when I was a kid. The plot to Predator is kind of interesting when you think about it… there's this humanoid warrior and hunter alien that's come to Earth, he's going to watch, hunt and kill anyone who's worthy of a fight like a Special Forces team. He’s going to kill them one at a time, take there bodies, skin them or rip out there spinal cord and take their skulls for trophies. He will only attack those he saw that were armed with a weapon.


Lame Sequel
I've only watched Predator 2 a few times, it reminds me of Robocop 2, a film that you watch only a few times and those are only the action scenes. The 2nd movie has several problems
1. A cop was able to kill a Predator?
2. Unlike the first one, there were no likable or interesting characters at all, their all forgettable.
3. It had a dumb plot, the movie came out in 1990 but the setting of the film is in the so-called near future in 1997???
4. The police and SWAT teams are shown to be completely incompetent as hell and they couldn't aim or shoot for shoot. Is this the U.S. or a third world country? The L.A. SWAT are some the best teams in America, then and now.
5. How the NSA Agents knew that the Predator was in L.A. was never explained.
6. Overdramatic scenes.
7. Bad acting.
8. Predictable scenes, idiotic lines and dialog.

The main character was not really tough badass cop material. The two Lethal Weapon films that came out before Predator 2 made him into too much as "the old guy who follows the rules". Arnold Schwarzenegger was asked to reprise his role in the sequel but Arnold was outspoken against the sequel's concept, feeling that taking it into the city was a bad idea (he was right). Schwarzenegger declined and decided instead to sign on for a different sequel, Terminator 2: Judgment Day... best career move EVER!

Although I hated the movie, there were a few things I liked
1. He was killing Colombian and Jamaican drug cartels and a few gang members… he was almost like a vigilante.
2. It showed that Predators were not heartless killing machines, they have rules and they draw the line… somewhat. Like not killing a little kid, the Predator was smart enough to know that the boy had a toy gun. If a woman was armed, they won't kill her if she's pregnant.
3. It also showed other types of weapons the Predators use… but that's all that film has to offers, although AVP and AVP2 makes the 2nd Predator film look like a masterpiece. I saw the Alien vs. Predator film when it came out in 2004......... it wasn't my idea to see it. Paul Anderson should never direct or have anything to do with films ever again.


AVP Films
There's not that much I can say about AVP1.
1. It did show that the Aliens are formidable life formers for them to fight.
2. There was somewhat of a Predator and human team up, the first ever seen on film.
3. It showed them with more armor, longer Wrist Blades and Arm Blades......... and that's it.
AVP2
1. Wolf Predator was a bad @$$ and instead of being another Youngblood, he was a Veteran......... and that's it.


Predators
Predators the film just tried to copy everything what was done in the first one and did it very, very poorly... in other words they just couldn't think of anything else, like the rest of Hollywood, there completely out of ideas. The main actor (someone who's once again not tough guy material at all) had such a fake voice, it reminded me of Batman in The Dark Knight where he growl-talks. Just like with Anderson, I don't know what people see in Robert Rodriguez.

Instead of all of them being Special Forces (the most dangerous human there would be)... we're suppose to like and root for disgusting criminals, rapists and murderers from around the world???? Criminals who also just use the F word all the time. Just like in Alien 3, I didn't care if the Alien killed a bunch of scumbags in a prison. Even David Fincher, the director, hated it... and when the director of the movie itself wants nothing more to do with it... that pretty much says it all.
https://www.youtube.com/watch?v=2fP6nJbk9Cc


Characters to Like and Care About
I cared about the Marines in Aliens, I wanted too see all of them make it.
What happen to such characters?
Ripley
Hicks
Bishop
Vasquez
Drake
Hudson
Gorman
The characters in Predator
Dutch
Billy
Blain
Poncho
Hawkins
Mac
Dillon
Now these characters were badasses, they were funny as hell and interesting. Even the little kid Newt in Aliens was pretty cool too because the type of kid that Newt was doesn't exist in films these days. Now look at the characters in Predator 2, AVP, AVP2 and Predators……… and really… who gives a frack about them?????? AVP2 was turned into a teen horror film…

To go from a interesting funny crew of the Nostromo (Alien)
To a funny kick @$$ Delta Force team (Predator)
To funny kick @$$ Marines in the future (Aliens)
To...
Lame cops (Predator 2)
Dumb prisoners (Alien 3)
An alien clone of Ripley with a bunch of lame space pirates (Alien Resurrection)
Boring archaeologists (AVP1)
A bunch of useless town folks and idiotic teens (AVP2)
A bunch of criminals (Predators)
Once again, a bunch of dumb boring archaeologists (Prometheus)
And a bunch of lame boring forgettable characters (Alien Covenant)

What a downfall for these films and the whole storyline, has Ridley Scott been taking filmmaking and writing advice from Paul Anderson???? Never hire Damon Lindelof to write, be the executive producer or anything!
Scientists destroy "Prometheus"
https://www.youtube.com/watch?v=osBFSuTRTqk

Everything Wrong With Prometheus In 4 Minutes Or Less
https://www.youtube.com/watch?v=-BWnTW4rL0U

Now we've got nothing but rip-offs of past characters that are just dumb, boring, uninteresting, and annoying to the point where I was rooting for the Predators, the Aliens or for whatever to kill them, but the Predators are weaker than ever now. There is a scene where Laurence Fishbourne's character is talking about how they've gotten smarter, and changed up their hunting tactics. But these so-called tactics are standing around in the open, un-cloaked, and growling... once again they've tried to turn it into a horror film.... that only worked in Aliens. Somehow hunting the most dangerous alien (Xenomorphs) is not enough for these Super Predators (...Super Predators... oh god), they have to hunt dumb humans.


Non threading and Weak
The Predators have also been used too many times in comic books that just have them fighting a known character and losing. They have fought everyone and everything from Aliens, Batman, Superman, Wolverine, and Judge Dredd……… well there are actually too many to name.

The Predator in the first film was nearly unstoppable, he took on a whole Delta Force team, a few other soldiers before that (the ones that were skinned alive and hung upside-down), and he scared the shoot out of me when I was a kid. But they seemed to have suffered the same fate as the Borg from Star Trek. They became so weak that anybody can kill them pretty easily, or Species 8472, they were more powerful than the Borg but the Voyager crew within one or two episodes defeated them pretty easily. When is a Predator going to live though a fight? Everyone we’ve seen on film has died.


Video Games
I played the 1994 Arcade game Alien vs. Predator at a movie theater with my older sister, I played Major Dutch Schaefer and she played Lieutenant Linn Kurosawa, we didn't get very far but that and the 1990 Aliens Arcade game are still the best. The fact that a 2D side scrolling beat'em up and shoot-up arcade game from 94 is still far more entertaining and more actuate to the Predator and Alien universes than a big budget Hollywood action film and video games from the 2010s is just sad...

I played the Xbox360 version of Aliens vs. Predator (2010) and I thought it was OK... well I only liked playing as the Predator. There were a few things I didn't like about the Predator in the game.

There were a few things I didn't like about the Predator in the game
1. One was only being able to fire the plasma cannon only a few times and it needed to be recharged. However in the first film, the Predator was able to use it as many times as he wanted too no matter how powerful it got.
https://www.youtube.com/watch?v=mGLXbK2XWMY
2. Using it and your claws to kill will un-cloak you, which makes cloaking yourself pointless, but the film showed the Predator killing Hawkins and Mac with his claws while cloaked and Dillon and Poncho using the plasma cannon while still cloaked. In fact all the Predators that we've seen on film were able to kill while still cloaked.
https://www.youtube.com/watch?v=Zrw7D-YXlo0
3. Using the plasma cannon in the game even once is considered un-warrior/hunter like and points will be taken away... what's the point of even having it?? Every Predator we've seen uses it all the time.
4. Even when you're cloaked the humans will spot you a little too easily.

Hopefully a sequel will improve on that and on others things... well... one can only hope.


Cartoon Predator
The Japanese anime character Knuckles the Echidna from Sonic the Hedgehog series looks like a kid's cartoon version of the Predator.
1. Big and tall
2. Long dreadlock hair
3. Spikes on his hands
4. A tough hunter/warrior attitude
5. Coming from a warrior race

Quite an intimidating posture there! Nice work!

The Predator needs an intimidating posture, thank you luckylace222

Thanks Falconlobo. And yeah, his armor is pretty cool