Just a Kiss by VampireWarith 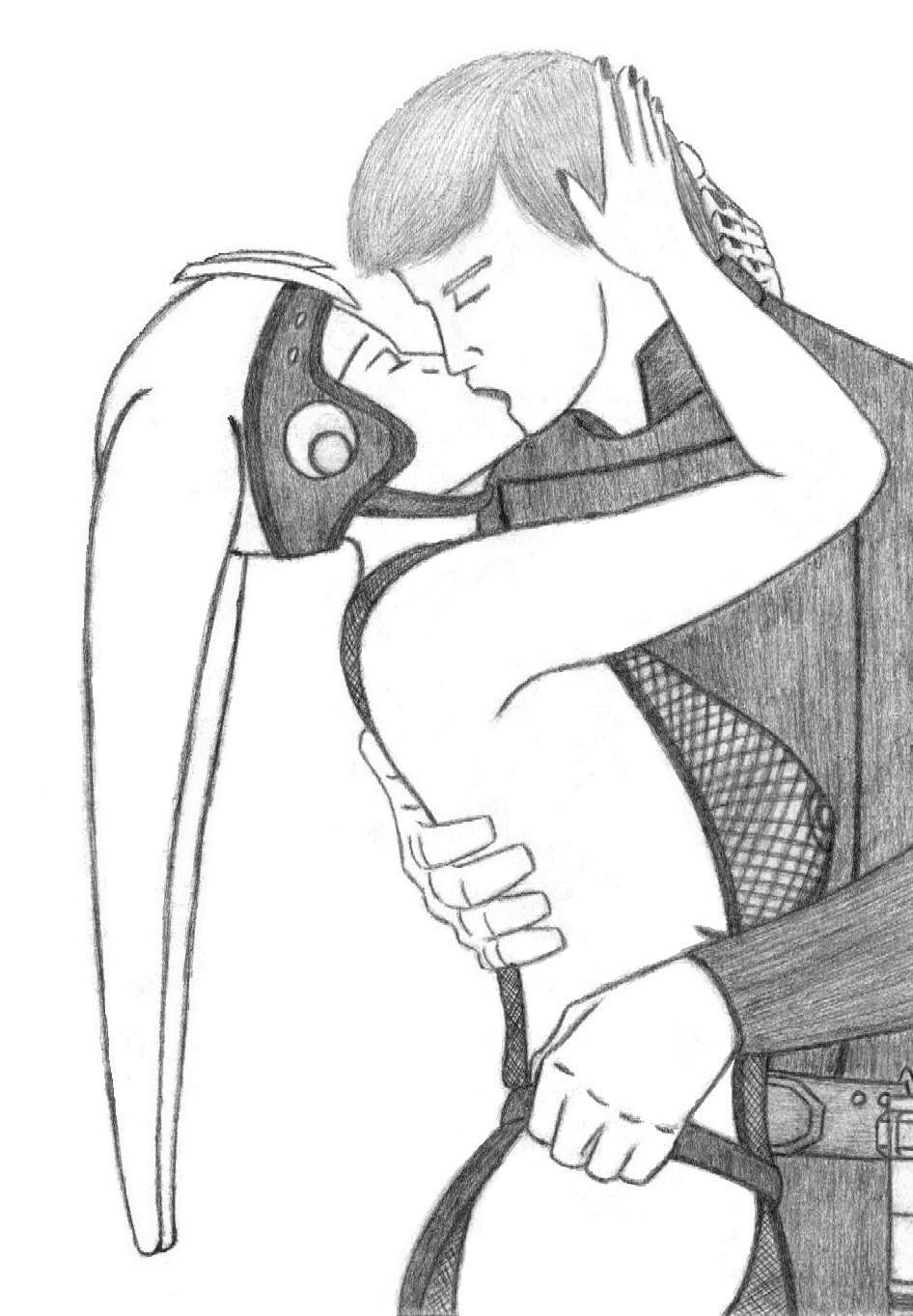 Picture
Moments before the scene: Witnessing Luke kill every one of Jabba's guards singlehandedly with just a lightsaber, Oola was nearly lost for words. She had heard stories of Jedi Knights taking on entire grounds of people with a power they called the Force and a lazar sword, but she never thought she would ever see such a thing. With her right hand on the left side of Luke's head, she puts her left hand behind his head and pulled him to face her and says

Luke: "Oola held nothing back. With her red pouty soft lips, she kissed me with such force, such heat, such passion, and such joy. She was grateful to be to be out of there, grateful to be alive. When her tongue entered my mouth, I could taste her. I can't really describe it or compare it to anything. I can't take credit or pride in the last kiss I had a year ago. I couldn't help but put my right arm around her. It was clear that this kiss was going to last as neither one of us wanted to end it. Without a word, Oola also made it clear that she wanted more… I then begin to take off her thin leather belt…"

Oola: "I should have listened to him. Fortuna told us that we would be serving a handsome master in his desert palace. The only one who fits that description was Luke. I was foolishly tricked, convinced that I was in for a life full of luxury. Right now, I don't care about luxury, I'm alive thanks too him. I press my body against his, hoping that he gets the message, a kiss is too much of a small reward for him. I will choose whom I give my body to and not to some crime lord or his thugs… and I see that my message got through, I could feel him trying to undo my belt. I don't want to break his heart but it can only be just this once…it can't mean anything…because I can't stay here, I have to go back home. But I'll make sure it's a night of passion we'll never forget…"


Characters
Luke Skywalker and Oola, the beautiful and sexy green Twi'lek dancer who became a slave for the slug crime lord Jabba the Hunt.
http://www.jedi-legacy.com/bio/oola02.jpg


Not a Couple
Let me just say that this is not a, "I wish they were a couple" picture… no, not these two. Which is why the title to this is Just a Kiss… a long deep one. When it comes to all the "kissing" or "make out" or "love making" pictures that I've done, it's always been a couple that are deeply in love with each other. But I thought what about drawing one where it's only a kiss or just sex and nothing else. Because I believe in two people having just a kiss and just having sex… because sex doesn't mean love… but sadly that seems to be something this generation has a hard time understanding.

But it depends on whom I draw because it can't just be any two people doing this. They both have to be good people, who know right from wrong, and after the kiss or sex they both go their separate ways.

But when I see a story like that, having two adults who could be right each other, but are mature enough to make that choice on their own without any interference of any kind, to know that it will only be one night of sex... I've hardly seen that. Whether by a so-called professional author or a fan fiction writer, half the time I see two people only have sex because they got drunk or one person completely lowers their standers and sleeps with the wrong person for whatever dumb excuse, they can think of… or sometimes there is no excuse at all. Somehow characters that are in there 30s or even 40s end up acting like idiotic teens... Marvel and DC comics do this all the time, and this generation just instantly believes it. They somehow think that's how it really works.


According to the story
"She and Sienn'rha (another Twi'lek) were trained together as dancers at one of the greatest dance schools on Ryloth. As they were in Mos Eisley on their way to Jabba's Palace, Luke Skywalker ran into them and attempted to set them free. He killed Rudd and rescued Sienn, but Oola wanted to see what Palace life was like, naively thinking she would be able to leave at any time. Little did she know that it wouldn't be what she expected. Fortuna took Oola, and succeeded in giving her to Jabba.

Rather than the customary dancing veils, Oola was given only a flimsy net costume to wear, loosely held together by narrow leather strips. Jabba was immediately enamored with her, and chained her by the neck to his throne as his personal property and slave girl. Oola was forced to dance for him, as well as give pleasure when the depraved crime lord beckoned, but she was determined to escape from her horrible existence, one way or another.

Defiled and miserable, fed only on scraps, she could not decide if it was better to keep enduring the Hutt's carnal embrace until escape was possible, or to die cleanly and well, and escape that way. Oola chose to refuse Jabba's advances at least once before her final dance, and was thoroughly beaten by his Gamorrean guards for this act of defiance. This beating was conducted "scientifically", so as not to leave her with any disfiguring bruises.

Later that day, Oola was able to speak briefly with C-3PO, who told her that Luke was indeed going to return to rescue them, and her hope was renewed. Her spirits high for the first time since her imprisonment, Oola performed the best dance of her life, which unfortunately would also be her last."
Jabba's Palace Roll Call #3: Oola
https://www.youtube.com/watch?v=2Wzi0lgISOs

According to Femi Taylor, "Originally Oola had quite a bit to do. I was setting the scene for Carrie Fisher. Richard Marquand showed me the storyboards. Oola was going to escape, run away and meet her destiny. Unfortunately the budget did not allow the character to go that far."
http://www.theforce.net/jedicouncil/interview/femitaylor.asp

However, it doesn't go into details on that, like how and when she would escape? Run away to where and what destiny?


Star Wars Re-releases in 1997
I hated the digital enhanced version they added in when she's dancing. It's meant to be a sleazy club, full of gangsters and people who don't give a shoot about anyone, the singer has a rough veteran voice that's out﻿ of tune because it's a cheap bar. The new version is so polished and perfect, that it ends up looking like a high-class jazz club. When Oola is dropped into the pit, it now looks like a cartoon joke, something you would see on Loony Tunes.


What If
This is of course a "What If" picture, what if Luke got there in time before she was killed, rescued her and she pretty much gives him a deep kiss, a hero's kiss is what you could call it. She either goes back home (which would be the most likely outcome) or she stays with them and becomes one of Luke's first Jedi apprentices (which would be the most unlikely outcome). But for the sake of a what if... she was trained to be a dancer, maybe she could use that for an advantage because there are fighting moves where it looks like one is dancing. Luke himself went from a farm boy to a Jedi Knight... not overnight of course, there was training, he was the son of the chosen one and in the span of 4 years (Episode IV to VI) he manages to do it in the (somewhat better) non-canon books and comic book universe and he rebuild the Jedi Order.


Relationships
Luke has had several short relationships in the non-canon universe, I'm not counting Leia because she's his sister. One of them, which was a very short fling, was Dani, who came from a culture that placed high value on sexual pleasure... and it's described as being awkward and embarrassing for Luke. Another one was Prithi... but that can't even be called a short fling, even though they made it seem that it was going to be... the story that involved her took place before Empire Strikes Back. But Luke still wanted to be with Leia, even though his chances with her were long gone. But Prithi ends up leaving so it ends up being pretty pointless.


Oola
Oola doesn't get enough love (although she only appeared for a few minutes in ROTJ) and like all the other women Luke has been with, I don't see it lasting that long. I never liked Mara, when she was first introduced, she was an annoying dog who... doged a lot and blamed Luke for all her problems. After all that, the only thing she had going for her was being a hot redhead with a tough sarcastic attitude… a female version of Han Solo. Even Shannon McRandle herself, who molded for the character, says that it was better when Mara was on the darkside and fighting Luke.

"I liked her best when she was Darkside, least when she was getting married… I thought the fussing over the wedding dress in the comic was a little unlike her. She was most fun when she was trying to kick Luke's butt!"
http://archive.is/RQWK4

But that's why I call this Just a Kiss... with some tongue action... and maybe a one night of sex... but it's not love or something leading to a relationship. Certain events would have to occur and a lot of character development would have to happen for Oola in order for that to actually happen, maybe a year's worth of storytelling. Even if she were to stay (just as friends), being trained as a Jedi, and all the events from the books and comic books that lead from Return of the Jedi and before the Legacy era... her chances of surviving are not good.

If anybody is wondering about an age difference, Luke is said to be at the age of 23 or 26 in ROTJ, Oola is said to be 21 but I've heard that dancer Femi Taylor was 22 at the time.


Final Thoughts
Another reason why I did this was because I wanted Oola to get some love... literally. Even if it was a short love affair, I can't think of anyone else but Luke that would give her the love and respect that she deserves. I found a few fan fictions of her... and one was OK, another two were pretty good, but the rest were crap. When it comes to fan art of Oola, half the time it's a scene of her dancing (obviously). Others unfortunately show her as if she's a slut that enjoys being a slave and being dominated or violated by gangsters...

The only fan fictions that I've found.
https://archiveofourown.org/works/30695462?view_adult=true

These two videos would have been perfect.
Oola's Revenge
http://www.youtube.com/watch?v=QkKPlvSyjLw