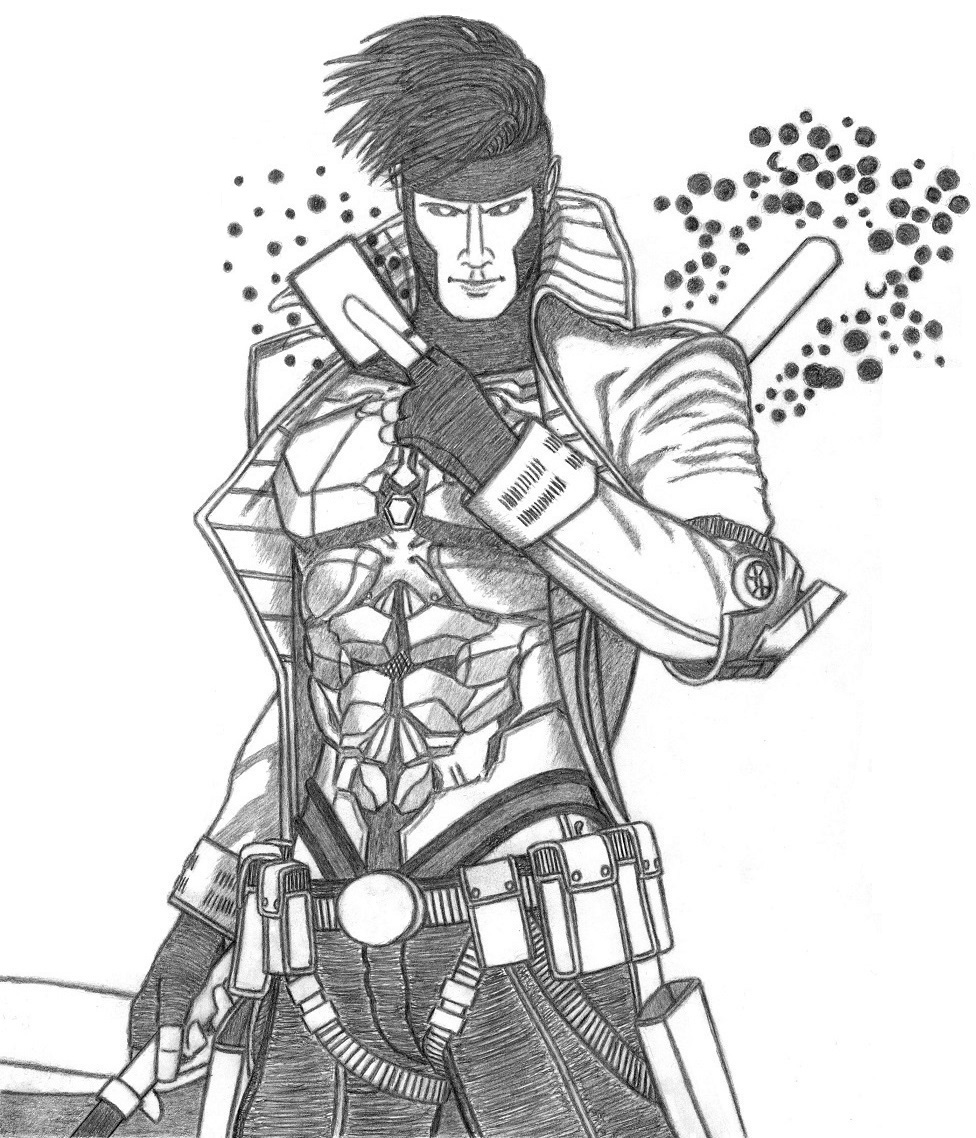 Picture
The mutant Cajun with the ability to take the potential energy stored in an object and converts it to kinetic energy thus charging that item with explosive results, Remy LeBeau, better known as Gambit from the Marvel Comic Book, X-Men.

This is a pencil sketch drawing of Gambit by Anson Ng, but Gambit's appearance here is mainly based on the way he was drawn by Marco Checchetto in the Daken: Dark Wolverine comic series. The hair is the way it was in the early to mid 90s, I never liked the way it looked when it was long and flat or too short. I'm not a fan of his black headpiece, it doesn't serve a purpose, but it's there. His trench coat hasn't really changed in all this time, except the color and those sleeve stapes, different shades of dark brown and very rarely it's been dark gray. His chest armor seems to be a mix between his original armor but with it being one solid piece and one color from the Daken comic book.
http://images6.fanpop.com/image/photos/41500000/Gambit-in-the-rain-gambit-41520328-564-1431.jpg
https://www.characterartgallery.com/p/8WVSZyM/
https://vimeo.com/161267868

The elbow guards, belt, straps, pouches (to store his cards) and holsters is also from that series.
http://www.lediableblanc.com/Wallpaper/09.jpg

His Bo-Staff has pretty much looked the same way since its first appearance, either a solid smooth silver piece of metal or it has ring lines or grid lines from top to bottom. The only time it has attachments on it has been seen in fan art.
https://static.comicvine.com/uploads/scale_super/11126/111269625/6558269-gambit%20jim%20lee.jpg

Some people might think that it's made out of adamantium, but it's never been stated and it's been cut and destroyed a few times.
https://www.comicextra.com/gambit-1999/chapter-4/12

Most versions show that the weapon can extend and retract.
https://www.artstation.com/artwork/8rG2m

If I were to color this, his hair would be auburn (which it is), his headpiece and neckline would be black, his chest armor be dark blue, the best example for that would be from his on-going series in 1999 and in Uncanny X-Men in 2000.
http://www.lediableblanc.com/Edits/088.jpg

His coat would be dark brown, his pouches, holster and keen pads would be dark gray, his pants and everything else would be black. His power color would be a mix between red and orange (the color of fire and a explosion), the way it use to be throughout the 90s before becoming... sigh... pink or purple. One thing I didn't want to do was put a giant or a small capital X on his outfit because I'm so sick of that... we get it! He's part of the X-Men or a team with the 24th English alphabet letter in the title.


X-Men: The Animated Series
He became my favorite character when I watched the animated series back in the 90s. When it comes to overconfident cocky funny characters, he's one of very few that I like, but half the time that depends on who's writing him. I've never been a fan of his original costume, the black headpiece, and the upper chest body armor (that's body armor??? It doesn't seem to protect him from anything), the pink vest, square pattern tight pants and the long silver metal boots... well, that's why I wanted to draw a more practical look, but still having the black headpiece.

Voice actor Chris Potter set the stander on how Gambit's voice and accent should sound. Unfortunately no one but Potter has been able to capture that, he was replaced later in the series by Tony Daniels, he wasn't very good and the animation got terrible.
http://www.youtube.com/watch?v=y0f3vp5FZPU


Other Animated Series and Films
Gambit's character and design was awful in X-Men: Evolution, I had no interest in teenage versions of the characters. Wolverine and the X-Men... here's a show that literally tells you in the title that Wolverine is going to be the center of attention and everyone else will just be in the background. Voice actor Phil Lemarr for some reason gave him a Jamaican accent... it wasn't Taylor Kitsch's fault for the terrible script in X-Men Origins: Wolverine, but it was just a mockery of the character. I'm not a fan of Channing Tatum, every movie he's done has been crap, he tried to get a Gambit solo film made, his idea of turning it into a romantic comedy... it really showed that he did not get the character at all and that other people had better ideas.
http://collider.com/gambit-movie-details-rupert-wyatt/
Thankfully, the film was cancelled in May of 2019.


Skills, Abilities and Powers
A lot of people, including the hacks at Marvel, have either forgotten or have ignored just how skilled, powerful and cunning he really is. It's said that Nick Fury is quoted stating, "One of the best hand to hand fighters I've ever seen." Considering that he has info on almost every character, that's saying something, however, at this point in time I can't fine the issue in which he said that.
https://www.reddit.com/r/respectthreads/comments/71escu/respect_gambit_marvel_616/

It's disappointing that the only people who ever made Gambit look powerful was the person who created him, Chris Claremont, Fabian Nicieza and then in 2012 it was James Asmus. However, storytelling and characterization writing from all three was a mix bag. Others have not only completely ignored all of that, but all his nuance, plotting, and planning is hardly ever a feature of his character or who Gambit is and what his name stands for.


A 90s Character?
There are those who say that Gambit is a relic of the 1990s... but they don't explain why that is, because he's not saying outdated slangs from that decade.
https://bestlifeonline.com/1990s-slang-terms/

His costume doesn't reflect that decade like most characters from Image Comics.
https://comicpunch.net/reader/mangas/Supreme/Supreme%20002/mercedk-05-004.jpg

His outfit is not any better or worse than most comic book characters from the golden age to now, but unlike others he's not wearing his underwear outside his clothes, his hairstyle isn't outdated like Longshot's (a mullet). Gambit is of a course a ladies' man, when he's single, but that type of character has been around for a very long time, long before the 90s. For the past few decades, hairstyles and clothing is a mix between several different eras, there isn't just one style of the 2010s and 2020s. But even if Gambit was a character from the 90s, compared to what we have today, especially to what most male characters have been reduced too in comics, movies, TV and video games... I'll take a 90s character any day.


Popularity
When it comes to his popularity, Gambit is still a very liked character with the fans, but not with the hacks at Marvel or all these SJW PC woke websites.

American Entertainment Marvel Survey results circa 1994
When asked the question, Who are the three X-Men characters you would like to see get their own monthly title? Gambit came in at number 1 with 51,451 votes.
https://mobile.twitter.com/ShayTay17/status/1059185656243474432

In 2013, ComicsAlliance ranked Gambit as #4 on their list of the 50 Sexiest Male Characters in Comics.
https://web.archive.org/web/20151018024021/http://comicsalliance.com/comics-sexiest-male-characters

Gambit and Rogue were the most requested pops of all time.
2020 Toy Fair New York Booth Tour! (6:14)
https://www.youtube.com/watch?v=bXP6wJEUDdk

Whenever I see people who hate Gambit, there's always going to those who hate a character, it's unavoidable, but they usually end up being male readers who are these inadequate self-conscious losers with women and have no sense of humor at all. I'm not expecting everyone to love him, but they can't name a single moment from the canon 616 universe to show why he's such a bad person, just exaggeration, vague reasons, flat out lies and the only examples they use are from alternate realities, because somehow those count, but it's just desperation. It wouldn't surprise me if a lot of these haters were hypocrites where they like characters who have actually done some pretty terrible things. It seems that many of the haters have barely read any of Gambit's appearances in comics, haven't asked any fans for info on him and just base their hate on the thought that he's just a creepy womanizer from a few episodes of the cartoon and read a summary from a wiki page.

Gambit has a large female fan base, so some of these males proclaiming a character misogynistic should actually try talking to the female fans. These people seem to be part of a 2018 poll where 25% of men who think that asking a woman out for a drink is sexual harassment.
https://www.youtube.com/watch?v=_VKWSvqB8t8