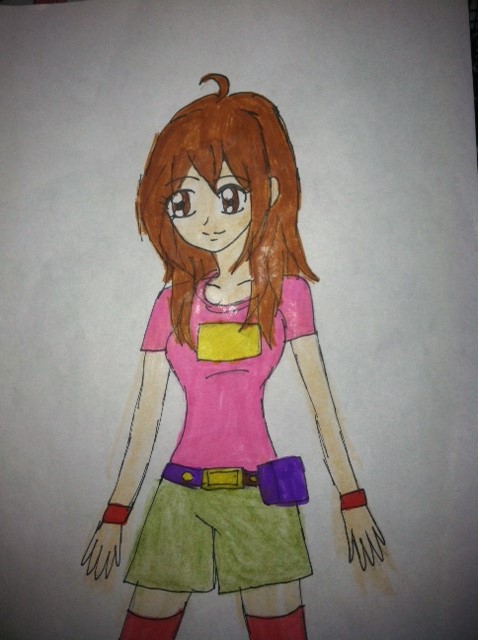 I finished her last night. I really love how she look ^^ She so cute >w<
so peoples what do you think?

Personally: Rough-tempered, little bit bossy, she is nice and sweet but she has great spirited and supporting others.

Dislike: being girly, waking up too early and peoples getting on her nerves and get her stuff and food stolen

Art by Me
If you want help me with her backstory let me know.

She was originally in United Kingdom. Her real name is Vivica Greenwoods. Her and her family is rich and lived in a lovely manison. She really dislike being girly and espeically wearing a dress. She act like a boy sometimes. She a tomboy. Her mother wants her to be more girly and doesn't like seeing her act like a boy. She has a cat name Ella. One day her crazy parents want her to get married at 16 years old. Vivica was in shock and not too happy about it. She suppose to married to some boy that is also rich and his name is Arther Willsion. She tries to talk her parents out of not getting married but her parents wouldn't listen and poor Vivica was upset. Sometimes later Vivica and her mother got into a agurment. She really dislike her mother. Her mother doesn't care how she feels. Vivica got so fed up and she goes changed and than ran away from home.  Sooner as she leave her home, she saw something that flash light. she went there to check it out. than what she saw there was a status of something that she never seen before. Once She touch it something bad happen. The whole place is starting to shake and she tries to escape but it was too late. she fell in and end up being in another world soon as she get there something strange appear and this thing use some power on her and make her erase all her memories. After that and than she passed out.

One day a boy name Sho Tenma and his friends were walking and than they saw Vivica lay there. They went over there and see if she okay. She woke up and confused and don't know where she at. Sho ask her a question about who is she and what is her name. Vivica responded that she doesn't know who she is. so she made up herself a name to be Mary Aguilara. Sho intoduced himself and his friends to her. She became friends with them. Sho tell her about the six mystal beasts. She thought that if she can find all six of them she can reveal that who she was what her memories that she use to had. She join Sho and his friends.

This looks good, you did very good job! ^^

you keep getting better and better. great job. keep up the drawing. =^_^= *gives pocky and pixie sticks*