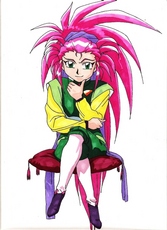 Other animes I also like are: Generator Gawl, Prince of Tennis, Zatch Bell, Princess Tutu, Kalaido Star, Mar, Full Metal Alchemist, Big O, Fruits Basket, Gungrave, You're Under Arrest, Lyrical Nanoha, Lucky Star, etc. (can't think of 'em all now but as they come to me I'll add them)

Video games that I love: Legend of Zelda (I own all the games! =^_^=), Final Fantasy (My favorite is Final Fantasy II for Super Nintedo a.k.a. Final Fantasy IV.), Kingdom Hearts (So many cute guys!), Mario games, Dynasty Warriors, Dragon Warrior, Ephemeral Phantasia, Dark Cloud, Skies of Arcadia Legends, all the Pokemon games, Naruto games, Kirby Air Ride, Harvest Moon games (particulary DS Cute and Save the Homeland), Princess Debut, etc. (There are more but I can't think of them.)

Suuuuuuuuuuuuper long time no see! I swung by FAC today and I came across you. I really miss chatting it up with you. :c

Let me know if you got an email or IM. I'd love to talk again!

Well GXP was a little more forgivable since they didn't bring back any of the previous actors. Because Tenchi and all the others where only in 1 episode(Washu was in 3). The guy they got for Tenchi was ok, Mihoshi's and Sasami's replacement was too, Bob Papenbook(R.I.P.) was a great replacement I thought that who should have played this entire time instead of what his name, but everyone else was just awful. Ryoko voice dosen't sound aggresive enough, Ayeka sounded like she had a southern accent, and Washu lack the same suble touch the previous actress did. Fortunatly they got most of the actors for the third OVA, exept Petrea Burchard for some reason. Even though she said she would do it.

or just buy of the Playstation store. Which strange that it's on there considering they don't have the 3 OVA series or GXP. Fortunately I seen it on Toonami. But I think it was such bulls hit that they replaced Petrea Burchard, with Mona Marshal!!! Don't get me wrong I think Mona Marshal is a great actress, but her as Ryoko was just wrong.

Yeah but the main character if you haven't heard of it already, isn't Tenchi like in GXP. It's Tenchi half brother appearently and take place 15 year after GXP.

Yeah considering I found a bunch of animes being sold on it including alot of the Tenchi Muyo series. Including one I have never heard of. Tenchi Muyo War on Geminar. haven't watched it yet.

I've been good. I finally got the internet to work on my PS3. So thats good.

You have been giving pocky and pixie sticks for such a long time, so I congratulate and love you! <3 Thank you for the comment and continuing support throughout the years.

WOH! I haven't seen you in long time. How's it been?
Go to page: 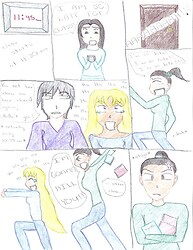