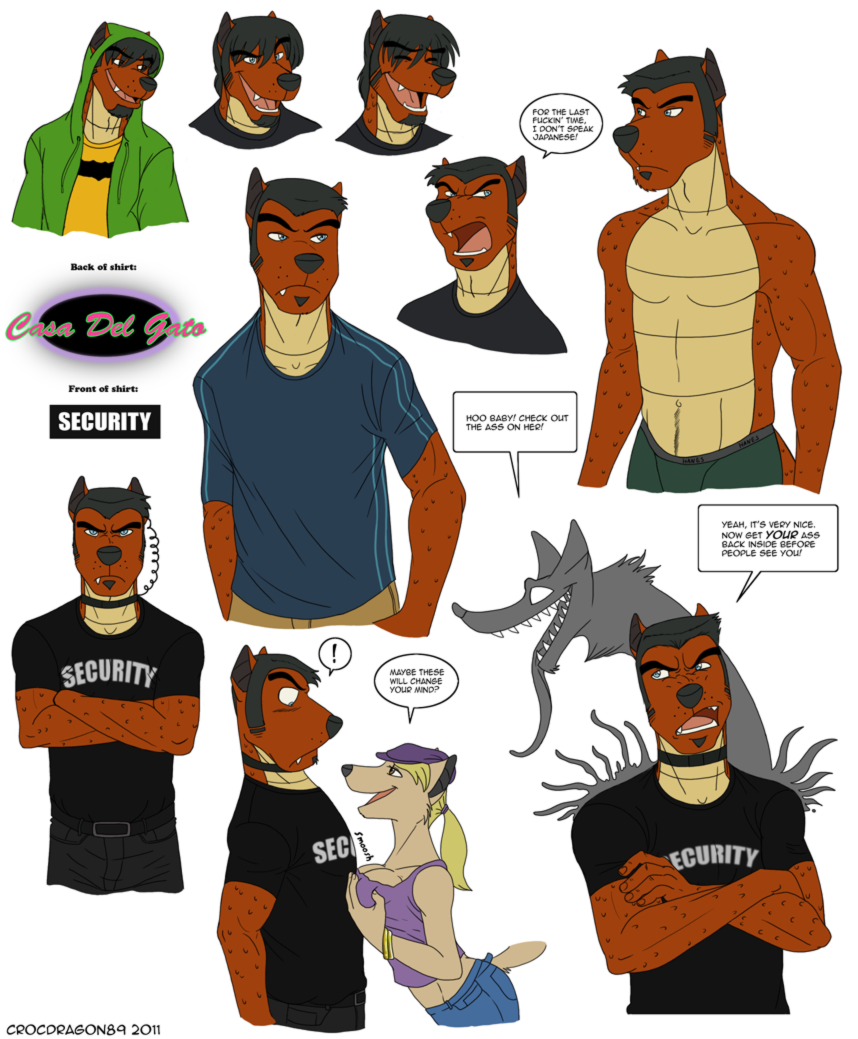 What's this? A post after all these months (and quite possibly years?) Why yes, yes it is.

A lot has been going on, mainly more character development and what not. Croc has changed quite a bit, so much so he's no longer a wolf but a pitbull, but he's still part crocodile, and still short tempered. And his name i actually Jason, Croc is just a nickname, hence the title being 'various Jason doodles'. I should also mention the demon fox possessing his body. That would be Amanojaku, a mischievous demon banned from the demon world and sentenced to Jason's body as punishment for pulling a prank on one of the much bigger and more powerful demons of his world. Jason just doesn't have much luck it seems. :V

I was trying to draw Jason with a more cheery attitude, hence the 3 doodles atop the page. The rest were recent. I also tried making him look more Asian. I'm getting better at it, I think.

The last doodles on the bottom left are of Jason at his new job. He's a bouncer for a popular night club called Casa Del Gato (House of The Cat.) It's basically a club where people can dance, drink and watch girls strip. Which is why I've bulked him up a bit more. He was already intimidating, but with added muscle, it increases his intimidation. The girl pressin' her boobs against Jason is a character belonging to
Cleveartois93 over on FA.

Also, if you haven't noticed, I've made Jason's underbelly darker. I literally grabbed a picture of a Crocodile off Google, used the color picker from Photoshop to copy the color, and viola. I think it looks better, but that's just me.

It has been a while, infact if not for Fanart Central still sending me the occassional e-mail I wouldn't have even realized (rarely on the site anymore) Nice to find a way to say hello again after all this time. Nice art by the way, :D perhaps I can try to keep better track of you now xDD (as it has been ages)

Ages indeed! How've ya been? I've been alright myself, drawing like I usually do. :)

(And if you wish to keep track of my art, go here! http://www.furaffinity.net/user/crocdragon89/ ) I don't post much here if at all. XD

Yeah I don't usually come around here that much these days either, all my activity is here http://spevakan.deviantart.com/ but yeah, I still have an AIM account, and a Skype account, (both under the name spevakan) so if you ever wanna chat and whatnot just give me a hollar at one of those. Oh and I'm alright too, done with college but I'm still jobless, driving now though so my house is not quite the purgatory it used to be. But yeah hope to speak with you soon...or type at..whichever xD