Rescue Me - BxT by koopa 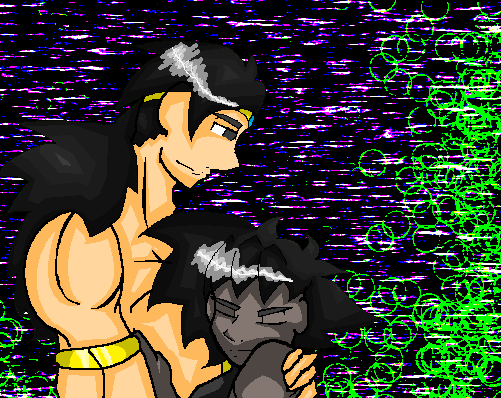 SHOUNEN-AI Warning... Do NOT look if you don't like, dankche!

That Madonna song really reminds me of Broly/Turles. Sure, it's kinda silly, but think about it:

I like to put [most of] the lyrics of the song from Broly's point of view. Just a little head's up.

Now...
The 'little girl' part is from Vegeta, the Prince of all Saiyans with his cocky, “I’m-Better-Than-Anyone-Else” attitude and his epicure - like lifestyle. The 'man' part is from his father Paragas, who expects nothing less of Broly and is always telling him to do this and that. And Broly is kinda juggling this, and the grudge that he holds from Kakarot - Goku as well. Needless to say, he‘s close to breaking down, and he‘s at his worse right now.

Turles understands this - While he has a bone to pick with Goku himself, I can also bet that Turles also has a thing against Vegeta as well. As for Paragas... Well, as a leader of a space pirate crew, Turles proves that he's not much of a follower, now is he? :giggle:

Turles knows what Broly's all about. Sure, he's not silly or weak, but he's very ferocious, and Broly even said it himself, he's a true freak.

Turles seems to be a man of mystery to Broly. He's sort of an unpredictable person - it's hard to find a pattern in his love. Perhaps one trait that fans like to give him is that he’s experienced. Particularly in the elements of love and lust.
He questions anyone who questions him and Broly. He questions Paragas. Vegeta. Kakarot. His crew. Everyone.

Broly, however, doesn't mind - he's like a child in a candy store... And it cancels out his anger and sadness. And as the two get to know each other better, Broly finds some hope that Turles loves Broly for.... well, being Broly.

Broly, like Turles, prolly had his share of tears and anguish as well. And as the Legendary Super Saiya-jin, life isn't exactly fun and dandy. =0

So now he's in a pickle. Turles takes notice of this - he saves Broly from drowning in misery.

With you I'm not a fascist, can't play you like a toy
And when I need to dominate, you're not my little boy
You see that I am hungry for a life of understanding
And you forgive my angry little heart when she's demanding

Broly loves to dominate. He'll take steps to put people at his mercy, whether they approve of it or not.
For the most part, Turles lets him have his way, while there are times when he resists and he wants to be dominant.

And sometimes Broly gets angry over that -- as in he goes Legendary. O:

He hurts Turles - but Turles always gets what he wants.

And he wants Broly.

And so, he's willing to forgive him for the littlest tantrum, which kinda confuses Broly (Since he's used to his father scolding him and using that control crown thing and what not.).

You bring me to my knees while I'm scratching out the eyes
Of a world I want to conquer, and deliver, and despise
And right while I am kneeling there
I suddenly begin to care
And understand that there could be
A person that loves me

Turles, like Paragas, is capable of calming Broly... except he doesn't need a device to do so. LOL, poor Paragas. Cx

When Broly gets out of line, Turles lets him know - believe it or not, Turles is stronger than he looks.

While at first Broly gets pissed at what Turles does, he then takes a look from his point of view, and feels pretty guilty for it.

Then he finds himself asking another question... Why does Turles care about what he does?

Does he… Love him?

Love is understanding
It’s hard to believe life can be so demanding
I’m sending out an S.O.S.
Stop me from drowning baby, I’ll do the rest

This is the only part of the song that’s in Turles P.O.V. for me. He tells Broly what love is, and that Turles relates to Broly as Broly relates to Turles.

Confuzzled? This means that Turles knows what kinds of things Broly‘s going though - and he‘s willing to go through anything with him.

He loves him for him.

I believe that you can rescue me.

Broly believes in Turles, and by this time he fully trusts Turles, and he expresses something to Turles that he’s never truly expressed for anyone else before -- Love.

Only you can rescue me.

Pretty much self - explanatory from there.