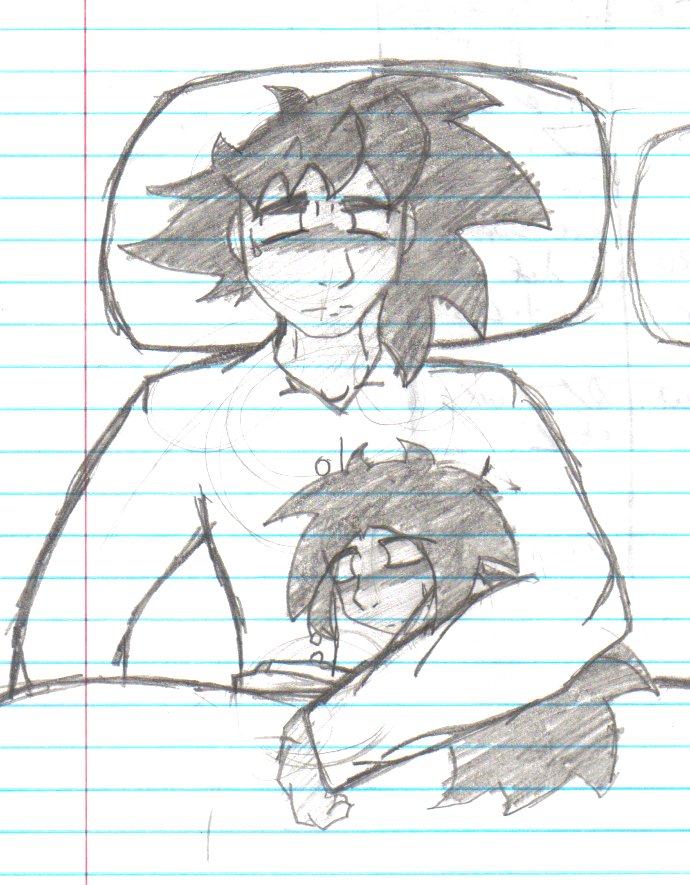 Turles wakes up one day and finds himself feeling nauseous and hot all over. He tries to shout for Broly, but nothing can come out of his mouth. So he rushes to the kitchen. He just happens to stop by Tomato's room and finds his son clutching his stomach looking like as if he'd throw up anytime now. They both go to the bathroom and the sounds of gagging and vomiting can be heard.

Broly, concerned, goes to the source of the sound. And he later finds out that Turles and Tommy are sick. D:

So, Broly, being the ever so dedicated father and mate, decides to take care of them for the day. He goes out for a little while to get groceries and take care of some things.

Meanwhile, Turles is rather annoyed by the fact that he can't speak or really eat and drink anything (His throat is really buggin' and fracked up) and Tommy's head is really throbbing, but he tries to hide it from his mother [it's a 'hey mama look im really strong" thing. ._.'].

Eventually, Tomato can't hide it anymore, and shortly after he and his mama took medicine to help them feel better, little Tommy collapses. :O And his momma immediately gets him into bed. They cuddle, and then they both fall asleep. ^_^

A couple hours later, their nap is interrupted by some really annoying rap shoot and Turles is just tempted to say 'TURN THAT shoot DOWN!' but can't because of his throat. :C

He doesn't need to strain his throat anymore than it is now, as the music abruptly stops.

He goes down there, and Broly is holding Razun and Lakasei by the neck collars, telling them to get out of here or die. >:C
He sends them running, and turns around to meet his sickened mate.
Broly tries to apologize, but his mate puts a finger on his lips and he smiles as if to say 'You have nothing to apologize about.' :)

So Broly takes Turles back up to his room with Tomato and tucks the two of them in before going back to whatever the hell he was doing.


The next day Broly become sick. And then Paragas has to help take care of all three of them. :O

. . . Just joshin' about Broly getting sick.