I will be at your side

I will be at your side

I will be at your side by melina678 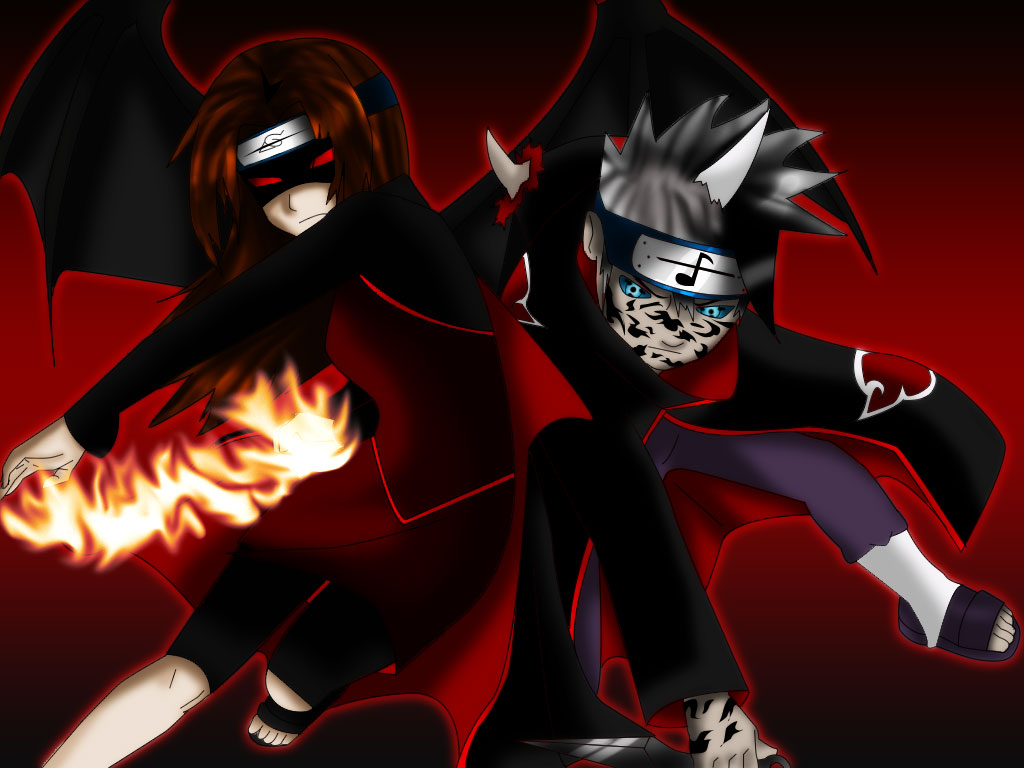 ...what can I say? It's fun to draw TripleDdizzy420's oc with mine! This is my oc Melina Ryuu in Faceless Demon mode and his oc Yasou Uchiha in curse seal level 2. I personally love how the coloring turned out on this ^_^ I dunno why drawing these things give me the urge to write a oneshot, but they do. So...here's a short oneshot to go along with this pic.

Yasou jumped from branch to branch, pushing and shoving any overly large branch that got in his way. His black hair was being pushed back as Yasou speed through the forest at quick speeds. His eyes were focused and narrowed, his senses only seeing one thing ahead of him; his upcoming battle. Adrenaline was racing through his veins as his curse mark gave a painful throb. He winced, causing him to get distracted for just a moment. In that split second, a sudden flurry of brown hair met his gaze.

Yasou landed on a thick branch, inches away from running right into Melina. He stepped back slightly as her piercing blue eyes narrowed dangerously at him. Her hands were at her sides, her Akatsuki cloak hanging heavily over her. The front of her cloak was unbuttoned down to her breasts, letting full view of her Fire Necklace and her irritated facial expression.

Yasou glowered at her before looking away, not wanting to stare directly into those ocean blue eyes of hers.

"Get out of my way, Melina," Yasou demanded, still looking in a different direction.

"You're not going anywhere without me..." Melina hissed through her teeth, her usually full pouting lips now pinched tightly together in anger and restraint. Yasou finally turned to look at her, his glare as harsh and deadly as hers.

"I'm going to this fight on my own. Get out of my way," he said again. He pushed passed her, and for a moment he thought she was actually going to let him go. Suddenly, a hand was on his shoulder, causing him to freeze at her touch. She whirled him around, her nose nearly touching his as she shouted,

"What is with you and thinking you have to do all of your fighting on your own? Why can't you just accept your comrade's help for once instead of marching out onto the battle field without any back up?!" Yasou stared into her angry eyes before turning his head again, muttering,

The hand that was on his shoulder suddenly grew incredibly hot. He glanced over at it to see that part of his clothing was beginning to smoke as Melina's body grew hot with her temper. Melina, as if realizing that she was losing her cool, suddenly pulled her hand back to her body. But her Fire Necklace still glowed with her anger.

"You are far too much like Sasuke..." she whispered, closing her eyes and rubbing her hand tenderly. Yasou's eyebrow rose slightly at this, but he remained silent. Melina slowly reopened her eyes, looking at him with the up most seriousness.

"I don't care what you say, I'm going with you to this fight," she said in a 'and-that's-final' tone. Yasou sighed before looking at her with narrowed eyes.

"Why? Why do you want to go there so badly? What if you just get hurt or...worse..." Yasou's voice trailed off at the end of the sentence, lowering his gaze from Melina's. Melina seemed to pause at this for a moment before letting out a low sigh. Yasou felt her hand being placed on his shoulder again, but now it was cool instead of the previous flaming hot. He raised his gaze up slowly to see Melina with a small smirk on her face.

"Hey...you don't need to worry about me out there. I'm a big ninja girl; I can take care of myself. I have fought plenty of tough battles before, this will be no different. You've just got to trust me on this. No matter where you battle, I'm always going to be by your side," Melina said, her once piercing blue eyes now had a gentle and encouraging gleam in them.

Yasou seemed to lighten up a little at this, but he didn't let it show. Melina could sense this, however, and flashed him one of her wide smiles.

"Besides, I can't let you have all the fun," she said, letting out a small giggle. Yasou rolled his eyes and sighed, a smirk finally tugging at his lips. Melina gave a grin before moving passed him, staring at the direction where he had been heading. She looked at him before suddenly jumping to the next tree branch, breaking out into a run. Yasou watched her for a moment before quickly chasing after her.

sweet looking pic.the both of you too look scary and very strong i also like colour too.oh and i think you too make a great tag team.

Cool monster poses! I think I've seen Sasuke in the pose the guy is in. great job on the one-shot once again. But it didn't tie in with the pic really, o well. I agree the coloring is way cool, has a sinister look to it.

it wasn't supposed to tie in with the pic