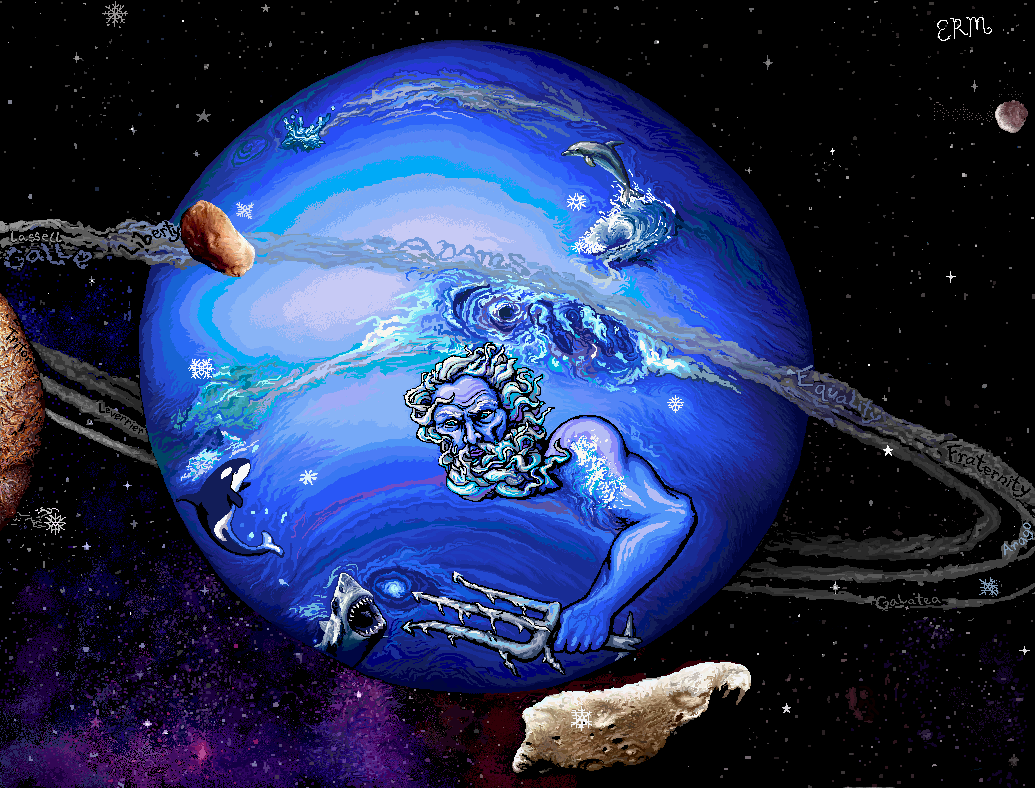 Finally here is Neptune my second surreal look on our galaxy, but first planet of this series that I’ve drawn on ms paint. The old guy is of course called Neptune who is the god of the sea in Roman mythology, so the shark, killer whale and dolphin I’ve obviously included to be part of the water theme. There’s also ten snowflakes, and all the moons and rings I’ve included are labeled. Unfortunately there aren’t any horoscope signs ruled by Neptune, I know a real shame right. My next planet will be Uranus, that should be a bit easier considering it’s practically featureless.

Anyway here is some information about Neptune if anyone’s interested-> Like a typical gas planet Neptune has rapid winds confined to bands of latitude and large storms or vortices. Neptune's winds are the fastest in the solar system, reaching 2000 km/hour.

Neptune's rings have been given names: the outermost is Adams (which contains three prominent arcs now named Liberty, Equality and Fraternity), next is an unnamed ring co-orbital with Galatea, then Leverrier (whose outer extensions are called Lassell and Arago), and finally the faint but broad Galle. And Neptune has 13 known moons, Triton it’s biggest is thought to be a dwarf planet that was captured by Neptune’s gravity, it’s volcanos fire off liquid nitrogen, dust, or methane compounds from beneath the surface.

Aww shucks thank you so much, I'm glad you like it!

Aww gosh thank you for such kind words, I'm glad you like this one as well. :)

AMAZING. This looks so fantastic! This picture takes my breath away! :)

Poseidon just has to spite everyone....! >:O The detail of the space and water- I just finished watching part of Finding Nemo today! The water detail in that movie is astounding- this picture reminds me of it. EXCELLENTE!!!!!

Wow to be considered as good that, gosh thanks for such an uplifting feedback, I'm glad you like it. :)

This looks like straight from a video game, good job.

Really wow, I never would of thought that, thank you sooo much!

...okay thanks I guess

As always, your attention to detail is exquisite. Well done. :)

Thank you so much!

nice doing on this i think i can do that one star i see on the top left :P

oh have u seen my bird btw?

Hahaha yeah I know I can't believe it's still there, they really need to choose a new artist to feature this month or at the next one. I'm too busy right now with other things to add anything new, people are probably getting sick of seeing my work on the front page almost as much as I am.

Oh and I'm sure you could draw that star on the left right next to Neptune, I mean drawing that is just like combining two triangles, the stars were the simplest part of this since well most of them were just dots. Sorry about now looking at your bird yet, I've been a little preoccupied with Christmas stuff...I'll go do that right now. :)

this time of year is crasy and ppl do get sick and yay and one day i well be in on the homepages art i hope
Go to page: