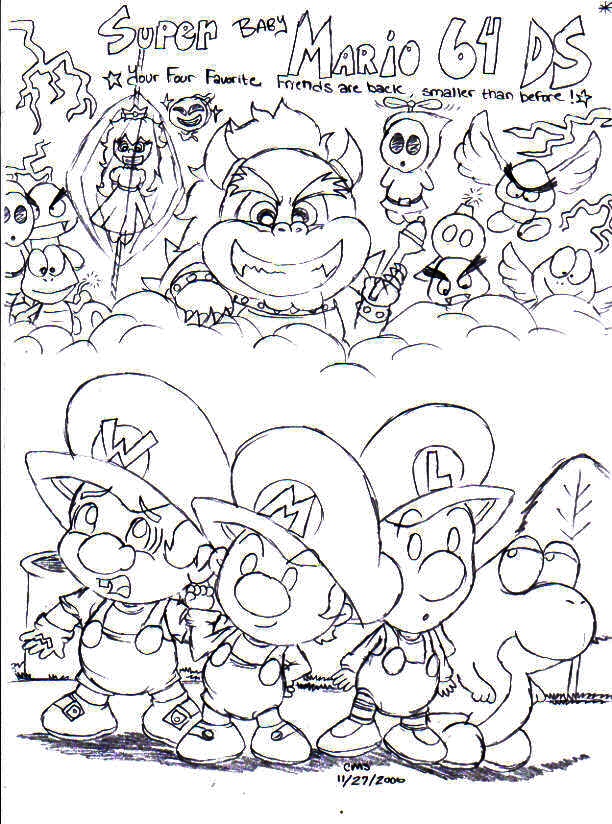 Story:
After witnessing defeat to the "fantastic four" (I just had to say that), Bowser flees, defeated and angry. Trying to determine how he would defeat this new, strong team, Bowser comes across Kamek's magic wand. Remembering the past, he soon comes up with an evil plan to put an end to his enemies once and for all.
Meanwhile, Peach sends an invitation to Mario, Wario, Luigi, and Yoshi for a "Thank-You Party" Receiving these party notes, the four head out to the celebration. As the party got on the way, Bowser shows up unexpectedly and abducts the Princess AGAIN! Mario and his gang charge at Bowser to rescue Peach, but before they could get any closer, Bowser waves his magic wand, transforming the four heroes into four babies. Bowser flees with the Princess, leaving Mario and his pals googooing and crying. What will become of the heroes? What will become of the Princess?

The Characters and their Specials
Name: Baby Mario
Special: balance, red-winged cap, can find hidden red blocks with his "M"

Baby Mario is the leader of the pack and blah-blah-blah. He really has no new abilities, except when it comes to walking across narrow platforms, his size and balance is perfect for the job.

Baby Luigi is much weaker than Baby Mario, but has more abilities than him. Some areas are too high for the other babies to reach, but seem to be a breeze for Baby Luigi. Though he may still seem a bit shy, Baby Luigi knows when its time to be tough.

This may seem a bit odd, but Baby Wario is the timid one of the bunch. This is his first time appearing as a platformer on his own two feet, whether than on Yoshi's back. Some areas may seem too hard to get through, but only Baby Wario can get through. His strength is similar to his adult counterpart, but sometimes he can overdo it! His giant magnet is perfect for grabbing coins that are too far for his reach.

Baby Yoshi's abilities really haven't changed much. The only thing he can not do is turn his enemies into eggs (he's a baby...what do you think!) Some levels require a fast character to beat, and Baby Yoshi is the dinosaur for it.

The Levels:
The levels are particularly the same, but have a bit more of a toddler theme to them, such as candy-like backgrounds and giant letter blocks. The enemies may seem a bit bigger only because Mario and his pals are little babies!

nice....... but why is peach smiling. shes kiddnapped. i LOVE baby luigi.

i would totally buy this game!!!!!

Babies are SO cute!!!

You really impresed me friend o.O

Is a cool history with a lot of action and fun, and so creative too.

I really like the idea of this kind of game

Fantastic, and the pic is Really awesome too

You have much talent, Keep work hard

With a lot of care, Zoomy n.n

That's cool! I love this drawing. It's cute lookin' seeing our heroes as toddlers. That is a nice idea for a game. If I had a DS, I'd buy it too!