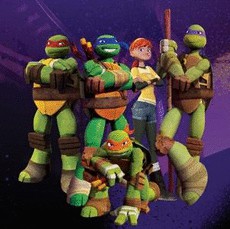 Man. This is my first profile here.

Hello, fellow fanart friends. My name is Enzo01. On the technodrome.com, some of you probably know me as Bauer 536. I am happy to be here and I'm excited to create some great work for you all. Just so you know, I am not an expert in the field of art, so please forgive me if my work looks a little amateurish. I have a problem with being patient as I'm drawing. It drives me crazy when I have to color them and the pencil points keep breaking. Grrrr.

Anyway, some things about me:

I'm attending college right now. It's unbelievable how much work I get everyday.

My past drawings are on here for now due to my homework I get from my professors, but may come up with new pictures during breaks from learning.

Let's see: it's always been Batman. I thought he was very cool. He still is today, especially with that series on today called Batman: Brave and the Bold.  The Christopher Nolan trilogy was fun, but out of all of them, The Dark Knight was the best.  The Dark Knight Rises, however, was not really good.

I also like Superman, too. Who wouldn't? My favorite series of the Man of Steel would have to be the 10 year pre-tights Clark Kent show Smallville. That show was so well done.  Too bad Zack Snyder's latest film on the man in tights didn't capture the essence and spirit of Superman.  It could have been better.

Plus, there are a few Marvel superheroes that are great: Wolverine, Thor, Iron-Man, Spider-man (sometimes), and a few more.  Recently, The Avengers film has been the best adaptation of our favorite Marvel superheroes, and it puts cartoons like Ultimate Spider-Man to shame.

Now since DC and Marvel superheroes are so popular, I get tired of them a little bit, depending on my mood. So I focus on something that's still developing: Teenage Mutant Ninja Turtles.

My favorite turtle: Leonardo. Man he's so cool. No wonder why he's teacher's pet in Master Splinter's class. My second favorite: Donatello. This is due to his personality and intellect (of course, Leo's pretty smart himself).

I must explain: I loved the first issues of the old Mirage Comic books. Plus, the first movie was spectacular, even though the turtles were made out of puppets and machinery. The old series, I'm happy for their success. The Next Mutation - awful. The 2003 series on 4kids I started liking, but then I got tired of it.

Here's the truth: I really want nothing to do with the 2k3 series. I hated how they depicted my favorite turtles, the animation made me feel a tad bit uncomfortable, and I hated the idea of Shredder being an alien in a robot suit this whole time. Smallville never bothered me, but this show did.

Once the 2007 CGI film was released (which was good, but not great), I fell in love with the franchise again. Of course during that time I was into Smallville. So it dawned on me; there hasn't been a series like that for the turtles. I don't know. I think it would be a good idea to write a show like that for the future. Like I said, I'm rooting for the ones who are still evolving.

To my surprise, while there hasn't been an hour-long adaptation of the turtles, Nickelodeon has made a really great show of our favorite lean, mean, and green machines.  It is a blast. I actually think their ideas are better than what IDW has done in their comics. The turtles being originally human, but now reincarnated? Spare me. Nickelodeon is the new deal, especially now they gave Leo his inner nerd.  I love it when he watches Space Heroes.  Not only does it give us something fun about the character, but I just love how it spoofs Star Trek.  The 2k12 TMNT show is the best thus far.  I highly recommend you watch that one.

Besides the TMNT, I think The Penguins of Madagascar have changed my life, too. Heck, I'd love it if they met the turtles. Could you picture Skipper working with Leo a lot? Yes! Could you also picture Raph beating the crap out of the annoying King Julien? Heck yes! Could you see Dr. Blowhole being betrayed by the Shredder during their investigation for a weapon? Double yes! So I'm waiting for Nick to cash in that crossover idea.

But besides turtles and rats and Foot Ninjas, I love something with a good story. Something like a story with Guardians, sprites, binomes, and viruses. Yeah, I like Reboot. If you don't know what I'm talking about, go online, purchase the complete DVD set, and immerse yourself. It is a clever and awesome show! That's why I call myself Enzo01 here. There's a character on that series named Enzo Matrix.

I was a fan of 24, and I'm already anticipating for Jack Bauer's return after Touch canceled. Right now, my favorite series is The Big Bang Theory. As a nerd, I glorify this show. Watch it! It's hilarious!

I've already seen some of your art, and I think it's fantastic. This is very exciting. I can't wait to add my fanart for you guys. I'm glad to be here.

You have such cool TMNT artwiork.

Hey man, I thought you'd like to know that my finished TMNT Leonardo is coming up on here soon. Since you seemed to like the sketch of it and all. :)
//Thomart

Thank you. I appreciate that. Hope everyone here is going to enjoy the artwork I've submitted. 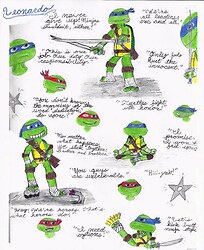 A Collage of Leos