Hello, everyone! I am EvilMajora13, or just Majora for short.

My Favorite (And Least Favorite) Things...

Music: Likes- The Beatles, Metallica, Iron Maiden, Deep Purple, The Rolling Stones, Ozzy Osbourne, Black Sabbath, Led Zeppelin, DragonForce, Dimmu Borgir, In Extremo, Rammstein, All That Remains, Thin Lizzy, Lynyrd Skynyrd, Dream Theater, Pearl Jam, Alice Cooper, Kiss, Guns N' Roses, anything else that's rock. I don't feel like listing them all. I also like Japanese music like Utada Hikaru and the Black Mages, and I love video game soundtracks!
Dislikes- Justin Timberlake, Rihanna, The Pussycat Dolls, Eminem, whoever sings that dumb song "Smack That" (I HATE THAT SONG SO MUCH), and anything else that's rap or that gets on my nerves.

TV Shows: Likes- Dexter's Lab, Courage the Cowardly Dog, Code LYOKO, Fosters' Home for Imaginary Friends (Yes, I watch that show when I'm bored.), The Grim Adventures of Billy and Mandy, Drake and Josh, Ned's Declassified School Survival Guide. For anime, I like Naruto, and I used to watch Yu Yu Hakusho. I'll really watch anything that's shonen anime.
Dislikes- Yu-Gi-Oh (I WANT YUGI TO DIE.), Pokemon (I WANT ASH TO DIE. THE TV SHOW IS A MOCKERY OF THE GAME.), and all those little kid shows like Dora that prevent good television from being shown in the morning.

Well, that's about all this is to know about me for now. Enjoy my pictures!

And just a side note: My profile picture is not of me! It's a fictional character that I made up named Rikona. She plays the tenor sax and bari sax, and is also pretty good at the bass guitar. She's also a tomboy, and she's very ambitious. I'll probably post a pic of my other fictional character, Nobu, soon.

UPDATE 12/6---- I'm still alive! I haven't had time to upload anything lately, but I've been drawing a lot of stuff in school, so I'll probably post some things very soon. Look forward to it! 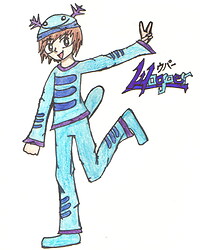