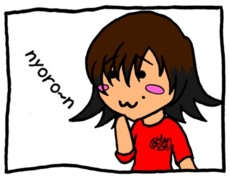 Well, I'm 19 (almost 20, jeez... almost out of my teens...) and I just love to draw. What else can I say? I started to draw in the Anime style about 6-7 years ago and I like to think I've improved. ^_^
I love Anime/Manga, video games (Mainly Final Fantasy) and online comics (both sprite and manga).
The few times I come on this site will be to post some of my better fanart. Not that that's saying much, but like I said, I *am* getting better.

Current (Fanart) Projects:
Neh... Nothing in particular at the moment... >>

If you like my art, please tell me! I'd probably be happy to draw something for you. I'm seriously dying to do some art trades.


Fav (proper) Manga:
-Skip Beat (SO. MUCH. LOVE.)
-Kare Kano (the first manga I ever really got into)
-Kiniro no Corda (La Corda d'Oro) (Probably only temporarily, but geez I need to learn Japanese JUST so I can play the game this was based off of.)


Fav Online Manga:
-Questionable Content (Epic win. Not much to say beyond that)
-The Phoenix Requiem (awesome art and intriguing characters)
-XKCD (what can I say? 42)
-Wasted Talent (clever jokes and she goes to the college I wanted to...)
-Awkward Zombie (YES)
-Order of the Stick (lol, either everything or nothing is cannon. I'm not sure which yet.)
-Looking for Group (no clever comment, but it's great.)
-Saturday Morning Breakfast Cereal (It's like Carlos Mencia, funny most of the time, but every now and then there's something you find offensive, so you just have to let it go.)
-Least I Could Do (WIN. HOLY shootE.)
-Devil's Panties (It's not satanic porn! ^_^)


Fav Sprite comics: (I haven't really been reading any sprite comics lately...)
-Bob and George (It rocks. And so does ice cream. Sad that it's done)


Fav Shows/Movies:
-Gilmore Girls (w00t! Own the DVDs, and I don't give a d**n. ^_^)
-House (o_O So freakin' cool. Liked the original team a LOT better though.)
-Friends (Often entertaining)
-Princess Bride (There's nothing you can say that will make me not love this.)
-Emperor's New Groove (don't ask...)
-Monty Python and the Holy Grail (NI!!!)
-Before Sunrise (Lovely romance, but the sequel sucks...)
-Rocky Horror Picture Show (Lol, all my guy friends think I'm a pervert because I made them watch this on Halloween in 2006... XD)
-Mindwalk (OMFG, an utterly actionless movie!)


Meh, I don't know what else to say except to reiterate that my DA is much better if you want to see my stuff.
~Misachi-Chan

Um, Yaaar?
Thanks for commenting on my old GG pic. I was super proud of it at the time. ^_^;

Hullo there, Victoria.
Thank you for stopping by my gallery. (I was immensely surprised that it was my Generator Gawl fanart that you commented on. (-: )

OH MY GOD, I'M SO SORRY! I JUST DELETED YOUR COMMENT ON MY SOUSHI COMIC, BUT I MEANT TO REPLY!!! TT.TT

Yeah, I just don't like how Soushi's trying to keep Riiko from Night, and he keeps mentioning little things that hint that he thinks he'd be better suited for her than Night... But that's just my opinion =3 I'm terribly sorry, but thanks for the comment anywho ^^;

He-he! Don't freak out, it's not a big deal. : )
I agree that that aspect of him is rather annoying. But he's still cool overall.
~MC 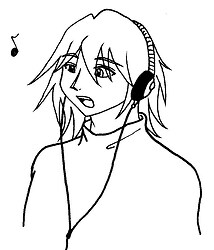