I'm twenty years old and started drawing when I was about seven or eight. It wasn't the kind of stuff I do now though, you see back then... I traced.

**pause for shock and awe**

I literally took a picture, a piece of blank paper, and a flash light. Placed them on the table and turned on the flashlight under it. Worked pretty good, now you got that mirror sketching shoot, lazy asses. Anyway, I stopped tracing and drawing altogether at eleven. Started again at fifthteen about the time they started playing anime on Cartoon Network. Anime was the doorway to drawing GOOD without tracing for me. Now I can mimic just about any style except the ultra detailed comic book stuff.

I've fracked up many a time in life and on paper. At least on paper you have an eraser. I think I have things going for me now, I have a jeep, a 52" LCD tv, a great family (I like to think), and I'm helping to pay buy the land my parents are sitting on. It's been a while since I've been in a realationship and even though I want to be with someone I'll never have the nerve to ask out more than two girls every four months. I'll just be alone.

That's enough about me, what about you?

Recently I've noticed a few flames for my handful of adult artwork. Which is rated as NC-17. I feel that expressing your opinion is your right and won't delete any comments unless they're double posts. Plus it's kinda nice to have fans anti-flame for me. Please note that I do not respond to any comments that fall under these underlying categories.

the n00b: "this rules will u do a three some with ron bonnie and wade plz that would rule."

the parent: "im sorry thats abuse and rapist you should be kicked off the site and so should your picS!!!!!!!!!"

If your comment reads anything like these two don't expect a reply. I don't battle flamers. I don't seek them out in their profile therefore giving them a reason to further bombard me. I do not do requests for people I don't know. If I've met you on the boards, and you know which boards I'm on, feel free to drop a line and maybe an idea. Please email it or pm me thru the forums. Same if you wanna do a collab, I love combining forces with my fellow felt-tip pen photoshop phreak friends.

I've also noticed that all the people who flame... can't draw and the ones that can... draw furries. So please, please, spend more time practicing your pencil work and less bashing people who properly label their artwork. Meh- furries. ***flinches***

u rock love the art

you have awesome artworks i love it alot!!

yOU'RE SUCH A GOOD ARTIST i ESPECIALLY LUV THE BLOODRAYNE PIC THAT'S MY FAVE!yOU KNOW YOU'RE DRAWINGS R SO UNIQUE AND VERY INTRESTING AND I JUST LUV EM!TAKE CARE!

dude you rock
Go to page: 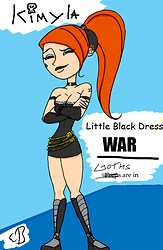