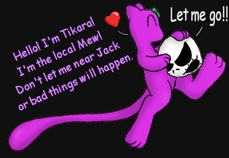 I'm just a very hyperactive purple Mew with a bad case of ADHD and a mild case of Aspergers to boot. I can get very fangirly over Jack, Willy Wonka, and Edward Scissorhands if they're around. I can make objects appear out of thin air, heal ohers and myself, float, creatate gigantic unbreakible bouncy bubbles, teleport myself to different places (although if I teleport more than myself, like say, other people, I can tire out and have to sleep for a long time), and can use the normal Pokemon attacks PsyShock and Metrenome. AND I like to make stupid and not true remarks such as Jack being gay or something like that. :3 *big grin* Nah, kidding. A absolutely LOVE JackXSally!! 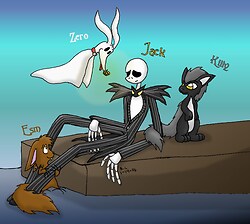 Jack and his Furry Friends