Hates: Current Events, Lack of scanner (to scan my handrawn stuff), Forced reading, People who are sad, Angst, Anything that's WAY too random

I am a long-time Sailor Moon fan, obviously. I like other stuff, too, like Cardcaptor Sakura, Azumanga Daioh, old-school Gundam (and Gundam Wing), Ranma 1/2...yeah, it's basically a mix of retro classics and latest hits. I was introduced to anime...not by Speed Racer, but Littl' Bits! (does anyone remember that show?) So basically, I've been an anime fan since I was a wee toddler in the '90s! I love to draw...especially fanart, though I have made my own creations before.

I love to draw (yes, I'm mentioning it again, because I can draw realistically, besides anime style), listen to music (lots of genres! though don't give me any country or current rap...old-school hip hop only!), I'm in my school's marching/pep/symphonic/jazz bands, as well as a lover of arts and composition classes, thus giving me more opportunities to improve my writing and drawing skills! I also love playing video games (Nintendo fangirl I am!)

Okay, I just finally realized I had this account. Well, I'm back. I won't post EVERY single picture I do to this site (you'll have to go to deviantART for that) but I'll try my best. For now, I'm just going to "catch up" -- post older works here occasionally. Okay? Okay! 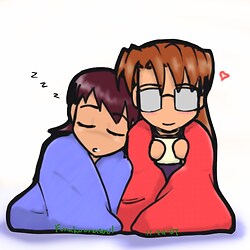