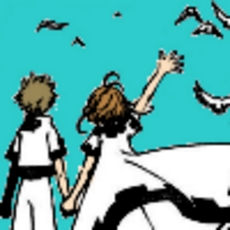 I am very lazy & am a huge procrastinator, I'm mostly anti-social but am very friendly, I can be very hyper & random at times, I can also be very dogy and want to be all alone at times, I don't like letting out my true feelings IRL but on LJ I'll spill all, I am very shy & it is uncommon for me to be my true self around new people, me no likely cats but me likey kitties, I can be calm most of the time but sometimes I lose it, I can go from being immature & slow to mature & wise in seconds, I can be annoying & childish & a spoiled brat sometimes, I don't like sharing but I do it cuz I was brought up to be generous, even though I really want to be mean I can't help but be nice (most of the time), I like girly things but am a bit of a tomboy, there's probably more about me to know but I have a horrid memory so I'll stop here.

I have a lot of favorite anime but the anime I love most right now are Get Backers, Naruto, Ouran Koukou Host Club, Fushigi Yuugi, & Hana Yori Dango. They are love. ♥ I also love a lot of manga, but currently my favorites are Fruits Basket, Nana, Naruto, Fushigi Yuugi, Fushigi Yuugi: Genbu Kaiden, Death Note & Alice 19th. I'm also a Harry Potter fan, but I don't talk about that much. ^^

I don't read much of anything other than manga & magazines but I do read some novels every now and again sometimes for school, sometimes for self. I do read fanfiction a lot, though, but not as much as I did when I was younger & I only read fics that look like they've been written by pros.

Video games usd to be my life years ago. I still love'em, but I don't play'em as much as I did when I was younger. I mostly like the Super Mario Bros., Zelda, Donkey Kong, & Pokemon series & I also love RPGs, especially Kingdom Hearts & other Squenix titles. Another fun series is the Katamari Damacy series. Those games are LOVE. I also enjoy video games based on anime. They're the best. ^^

Hi there! Thanks for the comment, and welcome to FAC! ^_^