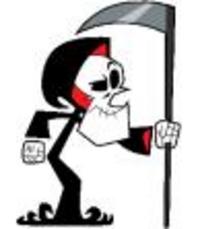 HI IM AMANDA. WILL YOU CHECK OUT MY PROPHILE AND PICS AND COMENT THEM PLASEA??????? I LOVE GRIM BTW

here is my story/episode of the grim adventures.......


opening: (mandy walks in a bright hallway then enters into a pitch dark room, closes the door behind her and the only thing you can see are her eyes. and she says "now this is better.")
show: (grim wakes up at 5 in the morning, grabs his coffee and sits at the kitchen table and overthinks his life of billy and mandy and how sucky it is, so he thinks of a plan to pretend he's sick, in order to not play with them.
grim: my plans foolproof
grim walks back in the bedroom, and a few moments later billy walks in the room so grim quickly jumped into bed and started pretending he's asleep and sick.)

grim: speaking of fools...
billy: wake up little buddy!it's morning
(grim has an evil look in his eyes.)
billy: hey, grim? is something wrong with your eyes?
grim: no, why?
billy: because it looks kind of evil
( grim changes the subject.)
grim: if you're going to ask me to play with you
today, you can forget it, because I'm not
feeling too good today.
billy: ohhhhhh! mannnnnn! well, can't you just use
your sithes powerful powers to make you feel
better
grim: you know, there's no point in saying the word
power 2 times in one sentence.
billy: what's a word and what's a sentence
(grim hits his forehead)
grim: ohhh! forget it.
(billy grabs grims sithe and expected something to happen when he used it, but there was just a small spark.)(grim jumpes up and grabs his sythe back from billy's greedy hands)grim looks at his sythe.
grim: what happened?
billy: I dunno, maybe it's broken and besides it's a
piece of crap.
grim: no it isn't, you are
billy: hey! i thought you were toooo sick to even
get up
grim: well, ummmm
(grim jumps back in bed and mandy walks in)
mandy: what are you two dopes doing now?
grim Ohhh, absolutely nothing. nothing at all
billy: I'm confused.
grim(annoyed): you're always confused, what else is
new? oh mandy, if you're asking for
me today, I can't because I'm sick so
i guess I'm going to have to sleep in
today.

I read your story segment and I like the way you write. I love how in character Grim is too. You're making me want to draw more Billy&Mandy stuff ^^
I don't know if you've heard of it, but there's this site called fanfiction.net. You should submit work there if you haven't already
Later, rock on \m/00

thanks for the comment. i'd love to see your stories, I'll be sure to  give them a look.
and GRIM RULES! \m/^^