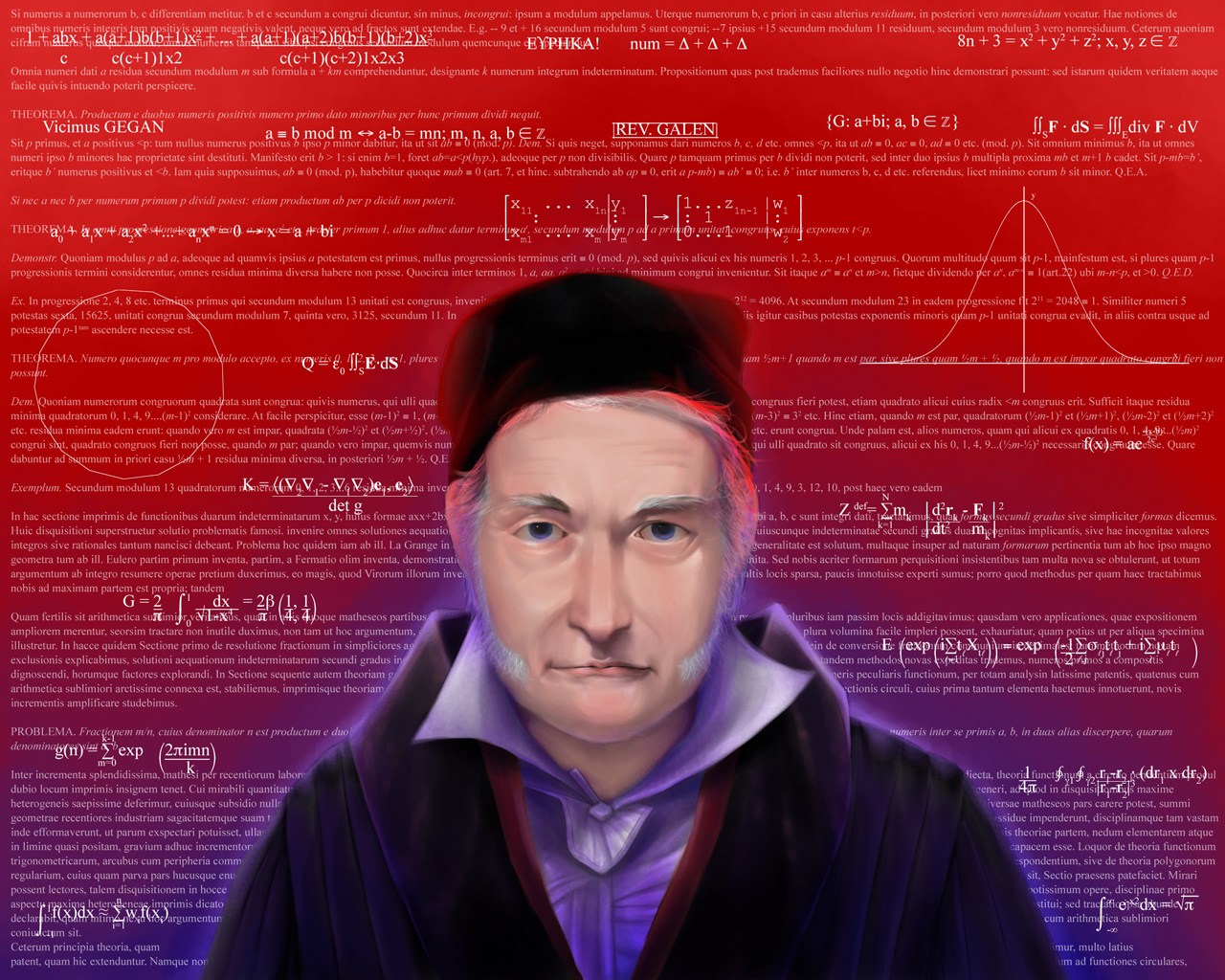 Okay, so I'm a total geek for posting this, but...

I realize this isn't entirely much like all the other stuff I draw, and the subject matter is certainly not the most attractive (I know lots of you dislike, and even hate math)--however, I will say it's the best portrait of real life people I've done so far. Ever. For those less mathematically inclined, this is a portrait of one of the three greatest mathematicians in history, Karl Friedrich Gauss. I won't go into the full details of his biography and write a lengthy essay about it, but in a nutshell, he was a genius, and child prodigy. After reading about his contributions to mathematics and a lengthy (70 pages!) biography about him, I was compelled to draw him, mostly for what he has contributed, but also for the fact that he doesn't discriminate against women, so long as they're proficient at math--in fact, he probably had several pupils and students (mostly male) that didn't meet his standards. Although it's probably not fair to compare someone like Sophie Germain to them. I also admit that I was touched by his humbleness and devotion to mathematics; for he did not want fame or money; he did math because he enjoyed it, and wasn't exactly rich for his entire life, even though he was around people that could afford giving him such luxuries, and his fame was so great that one might have expected him to be rich. I admire people who operate like this.

For those who actually care, the equations in the background are contributions from Gauss, although he's probably made a lot more than that; I just didn't have a way to transform all of the theorems, proofs and other ideas into formulae. You'll also notice that some of them are things taken directly from his math journal that he kept, although most of it is supposed to be incomprehensible to people who have little knowledge of advanced mathematics. I admit I'm not as well versed in mathematics as some people (hey, I'm not a genius), so I don't actually use or understand some of the equations, and were only included to acknowledge what Gauss did. The Latin words in the background are parts taken from his Disquisitiones Arithmeticae, Inquiry of Arithmetics (I knew Latin was good for something), which contains quite a bit of the foundations of number theory that we use today. It's also one of the few things he did get published.

I also admit that I used a painting of Christian Albrecht Jensen's version of Gauss' portrait as reference. It's a really nice piece.

I'm also quite glad I drew this, because the Disquisitiones Arithmeticae and the title, "Prince of Mathematics" appeared on a math history test I was taking, and because I used part of it in this piece, I recognized that Gauss wrote it. If I hadn't drawn this piece, I might not have known that.

EDIT: Thanks very much for the feature guys. I wasn't expecting it.

Finally, a refreshing new style and a good break from the rampant anime around here. Great drawing and idea, of drawing an actual real person- in not-anime style!

Everything about this drawing is simply amazing, I especially love the coloring style and his hair.

Well, that would be breaking my own rules. 100/100 quality, and congrats on doing something not anime. I have simply had it with the rampant anime style. And yet, people seem to enjoy looking at anime art more then this fresh peice of art.

Anyway, I'm rambling. But its really nice to see some art like this.

First you must most get photoshop or paint shop pro usually obtained in a not so legal way. Then after that do as i have and open up your pic and just mess around alot with it. Or go to college, only you cant do that option in a not so legal way, which takes the fun out of it.

Oh and for the pic, nice design, but i hate math.

Not only is it a drawing of a mathemetician, but this submission's ID value is just one away from the "unluckiest" number ever. You can't time coincidences like that.

eeek. big scary words behind him 0_0 anyways this is nice! awesome colors and shading!

I still hate math though

I can never quite understand how people make such brilliant works of art on the computer. This is just excellent. well done. *faves*

Wow, what a beauitful piece! I love the realism, and the coloring looks great, as well as the background.

I can see you put a lot of effort into this, so it's definitely going in my faves. =)

Excellent piece of art my friend. I am definitely adding this as a favorite and you as a favorite artist. I only have one small complaint about your art though. His eyes seem to be quite "cold", if you will. Was that intentional? Or am I just imagining things? Either way, love the art.

According to what I have read about Gauss' personality, he is a rather cold person. They mostly describe him as being isolated, being aloof and austere, but also simple. Since he is a genius and understands lots of things normal people don't, it makes sense that he might isolate himself and have few peers that do. Interestingly enough, I'm the same way myself, only I'm not a genius. I also find it interesting that both of us learned classical languages on our own when we were teens.

If you believe his eyes look cold, and Gauss was a cold person, I guess I've done my job as an artist. Thanks.