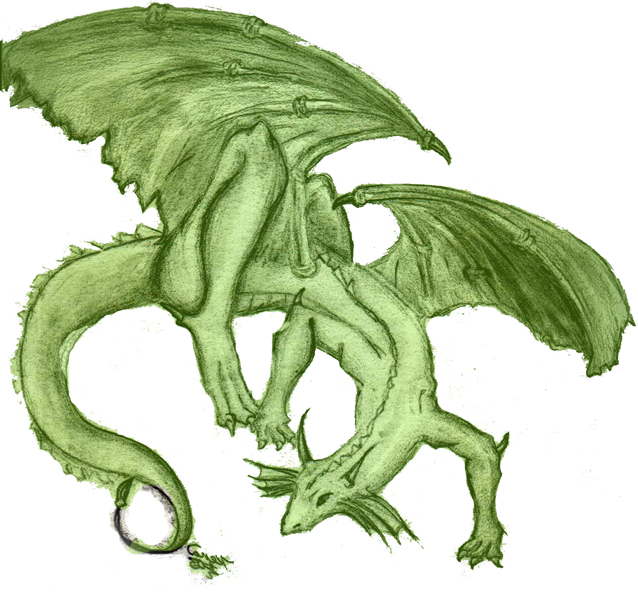 O.o dude, you're like, you know, kidding me right? your first dragon???
O, I get it, I strumble opon another of those kinda artists who can do anything without any trouble. or at least, not to much trouble.
You know, when i concour the world I'll have to exterminate your race, you be warned kay? :p
Buyt serious now, it's real cool. I know nothing +articular about dragons so no advice here sorry. All I can say about dragons is if I like them or not. And I like thsi one. OK, I wouldn't like him in my bed :s but on paper it's great ^-^

Thats brilliant for a forst dragon - seriously! I have drawn three and none of them match up to yours

That's your first! O.o
You should draw dragons more often. I do agree with the crtique of Stratadrake, but overall, it is an awesome dragon. Keep it up!

thanks strata, i appreciate the comment. ^_^ I don't know if i will be able to fix this one, but in the future when i draw more dragons, i'll be sure to remember your advice. ^_^

So, you requested a critique, eh? Better fasten your seatbelts, this may be a rough ride....

So, where should I start... Ah! I know. I'll start with the wings. Wings are a delicate matter, and usually the first thing I can find to gripe about. This one, as it is, is no exception:

- The wings feel too far back along the dragon's body. It takes a lot practice to develop a good feel for the 'right' positioning, but in general, try to think of where the dragon balances, where its center of gravity is, and affix its wings there.
- The limbs structuring the wings look too scrawny to me. As a result, they don't appear strong enough for gliding or flying with. The leading wing-edge and partitions are okay, but the main 'arm' of the wing should probably be a bit larger and thicker.
- The dragon's left wing appears at an odd angle, I can't make sense of how it's being held.

Another thing I notice are the legs. The rear legs seem extremely large in comparison to the front legs, which I find odd. Quadropedal creatures tend to have all four legs of roughly equl length.

The length of the tail seems to be a final gripe about the dragons. Actually, it's not the length, but the taper of it, specifically how thin it is near the end. Large animals and thin tails generally do not work out well together; to me, the tail feels as if it should "stop" about where your signature is.

No complaints about the overall, semi-Oriental physiology, or for the size and hsape of the head. Those seem fine, even if I prefer Western over Oriental type dragons any day.

So, that's about it for a quick critique on this dragon. What do you think?

um...it sounds like your implying that your dragons are cooler than mine...uhh...not that i'm saying they're not---oh never mind. I'll be sure to check them out okay? okay. ^_^

Hmmm...very neat I must say..but...if you want to see something really cool..wait until I get my dragons up..they're awesome! Check 'em out if you can!