The Final Justice by HyruleMaster 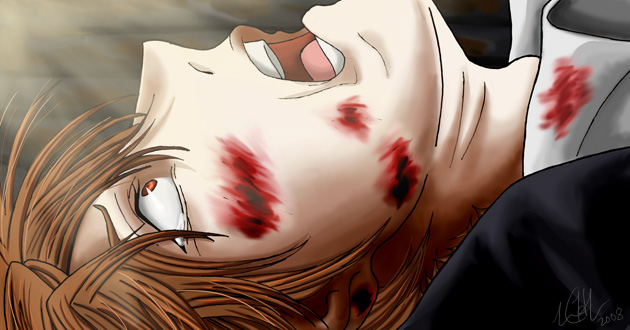 Well, if you didn't notice already--this is a spoiler if you haven't finished watching Death Note yet. So if you don't want to be spoiled even more, then don't read on.

My thoughts:</b>This was the only moment in the anime where I truly felt sorry for Light--because he was just so lost in his ideals, he had no idea the magnitude of what he had done, so all he could do was hope that he'd get some miracle; at the same time, he didn't know who to turn to, however. But if you ask me, I say that Light deserved every bit of what he got at the end. His intentions may have been good, but he was pretty much bound for absolute corruption. As the show went on, he gradually became what he wished to purge the world of. My brother even pointed out that as the episodes progress--the suits he wears get darker and his hair and eyes get more of a shade of red. And that is why, I absolutely love Light. =3 He's a wonderful character.

So I drew this moment where he was on the ground begging for help, because I was so taken by it. That and I wanted to practice expression and lighting with this picture. And I'm actually satisfied with the final result.

xD I SO AGREE> @__@ Light killed plenty. It's only a given he would dig his own hole and end up like this. All for a selfish new world...but I do feel sorry for him too. In the beginning, he really did have good motives. to create a world good enough to his ideals.

i <3 Light
Light did NOT deserve that because he was just lost and then when he finally found out that what he was doing was wrong... ;(
i <3 Light

well done. I also felt bad for Light when I read this, but I guess bad guys never win. The only time I didn't sympathise with him was when he knocked away Misa's Tea.

Is it true that his suit gets darker over time?

I felt kind of bad for light at that point becasue I think that he felt that After everything that him and Ryuk had been through that maybe ryuk would save him. I honestly had a dream that i was a dog and went after ryuk for killing light. But this is really good and faves to it. I've added a new pic that i drew and i wanted to know what people think of it. FAVES!!!! This Is Awesome!!!

That was the most scariest psychological frighting scene i've ever witness.... sound dramatic but true... amazing anime and ending.

Loved the ending of Death Note, but I think Light deserved it. You captured his emotions well. Also, great light and shading in this picture.
Go to page: