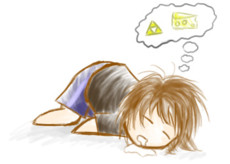 Explanation behind the name: Some people have been curious about my pen name "Hyrule Master". Here's a back story- As all of you are aware, I am a huge Legend of Zelda fan. As I was playing the games, gradually I was more precise in controlling Link's movements, and eventually I memorize every puzzle I come across in each of the games. In addition, I have gathered a lot of information and have made observations, so I know a lot of back story, I suppose. Since I'm told I'm fairly good in video games, and my favorite series is the Legend of Zelda... I am known as the Hyrule Master!

To make things short, I'm a HUGE LoZ fan... (I've been familiar with it ever since I was three). So you will find most of my fan art is in that catagory. Of course I'm an anime fan and big video gamer as well, so you might find some pictures in those types of categories. I'm only an underclassman high school student, so don't expect very much of me. (I'm NOTHING compared to some people on here. 0_o)

I also write. I do have my flaws, though. However, I am working on a series of books to publish! ^^ I do write fan fictions too, (mostly LoZ of course) some of them are on this website, but you can find most of them on fanfiction.net. (My user account is "Hyrule Master" if you're interested.)

Most recent wierd dream...(Just because...):

I was on a trip with my parents when I had this dream. We were in a hotel in Kanab, Utah, by the way... Okay... I was in this GIANT hotel place with a bunch of people. (The hotel room I was in happened to be parallel to the hotel room I was sleeping in that night.) We went outside the hotel and it was this HUGE courtyard with forests all around. We watched these marching bands perform their shows, (which, by the way, was in the most innapropriate place... it wasn't even on a football field! It was on a small concrete platform surrounded by fountains) and for some reason I was holding one of their flags. Then this lady came up to me and said, "Young lady, after this performance is over, come and see me." I peeked at the strip of paper which she held and in colorful letters it spelled, "referral". (By the way... in my elementary school... which, thankfully, I have been promoted from... they handed out a TON of those... So I guess you can say I was traumitized... and no, I didn't get any referrals if you are wondering.) I quickly said, "I'm substituting in their flagline." The lady then just walked away ready to give another student a referral. Just as I went down there their show was over. I then went back to the hotel room with the other people who had that same room. The person in charge of us told me that Ganondorf was going to come after me and rip me to shreds... 0_o So I decided I would dress up in a Link costume to warde(?) him off. Later on there was a film festival for some reason. They instructed whenever Link took a walk they would count the votes. After placing my vote I actually went with Link (he was wearing his fire tunic) because I was still thinking Ganondorf would come after me (I was clinging to his arm like there was no tomorrow... man why was I so scared?!). Later on I met with some other people from school and we discussed who we voted for and then my dream ended.

Updates-
7/28/07- Well, there hasn't been any reason for me to update this section. XD That's why you haven't heard from me recently. Well, I'll be off to band camp Monday through Thursday. (I'm french horn section leader now. =D) I've decided to put the fan fiction, Winged Darkness on here. It needs more feedback, and hopefully I'll get some here. >_>;;;....

Fragmented Memories
Adventures of Ari Overshadow
Girl from the sky
14443131866283

lord of the rings contest!
-thought u might wanna be part:)

8D WOOOOWW what amazing art you have!

Your art is so beautiful. I love your gallery so much!

you have a very beautifal gallery ^-^ keep up your amazing work!
Go to page: 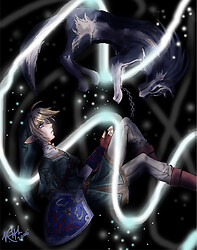