My Naruto OC (Her Bio)

My Naruto OC (Her Bio)

My Naruto OC (Her Bio) by Moon_Princess 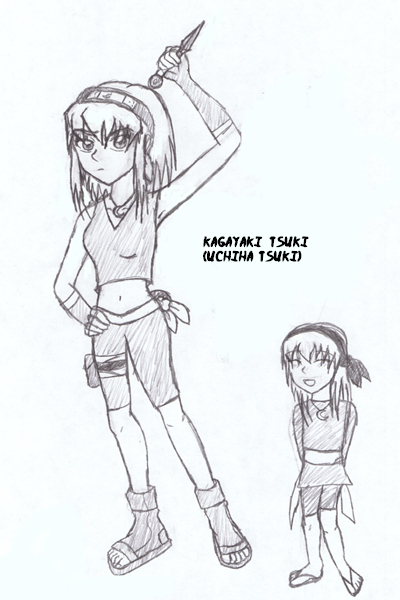 This is my Naruto OC's BIO!:

Real name: Uchiha Tsuki
Name she goes by: Kagayaki Tsuki (It means "Shining Moon)
Age: (When she's a little girl) 9
Age in Naruto: 15
Age in Naruto shippuden: 18 (She doesn't look different in shippuden. The only difference is her clothes and she looks a little more grown-up. I didn't want to strain my brain anymore that night, thinking up another outfit. :P)
Hair color: Silver/white (more white-ish)
Eye color: Blue
Skin color: Pale
Village: Konohagure (Konoha/The village hidden in the leaves for those who don't watch the Jap. version like I do. ^^)
Clan: Uchiha (But she keeps it a secret)
Friends: Naruto, Sasuke, Sakura, Kakashi, Tsunade, Iruka, and everyone else.
Enemies: Anyone with Orochimaru and the Akatsuki
Lover: None
Jetsu type: Water, healing/medical, and Taijutsu.

Personality traits: Kind, tough, hot-tempered, strong, smart, wise, sometimes rude, strict, easy to get along with, and is kind of like a big sister to most people.

Bio:
She was a part of the uchiha clan and was childhood friends and best friends with Sasuke. (NOT lovers)
Tsuki left Konoha for a while to go train in the star village(It's sort of real. It was a village in the filler Naruto episodes before Shippuden. It hasn't been shown in America yet.), 3 days before Itachi, Sasuke's older brother, wiped out the clan and left only Sasuke.
Word got to her before she returned to the village and realized that Itachi was looking for her to kill her. (She earned her sharigan at an early age and graduated the academy at an early age like Itachi.)
Tsuki knew that Itachi was stronger than her, so she changed her name and changed her appearence slightly so not many people would recognize her.
The people that DID recognize her kept her real identity a secret.
She didn't want anything to do with Itachi or her past. The only person she would be willing to still talk to is Sasuke. But she lost contact with him for six years.
When she went to her deserted clan area, she only found her necklace that her mother gave her when she was little. (The one she's wearing in the picture, a small golden crescent moon)
She left the necklace at home during her training so it would be safe.

At night, Tsuki would often sit on top of the roof of where she lived and sang "Natsuhiboshi", a song her mother learned from a friend and sang to Tsuki when she was little. (if you watch the Japanese Naruto, you know it's the song that Sumaru's mother used to sing to him when he was little, in the Star village saga. I really love that song. ^_^ So pretty.)

Years later, when she turned 15, she was asked to help Kakashi assist him with his new team.
Tsuki was shocked when she found out that Sasuke was on that team. (She thought he was killed with the rest of the clan.)
And even though he was her childhood friend, she had to keep her identity a secret from him.
Tsuki makes fast friends with a lot of people in the village, among the other villagers, Team 7, and the Hokage(s).
She often scolds Sasuke of how stupid he is whenever Sasuke talks about getting revenge on Itachi. They often get into arguments, but in the end, Tsuki pretty much wins the argument because she almost slips her identity. And she told him that she knew a lot about Itachi. She also almost slipped out that Itachi was out to kill her, but quickly recovered before she slipped the information.

She's great friends with Naruto and often takes him out to ramen, since her job pays well.
She even helped Sakura with medical ninja training when Sakura decided that she wanted to become a medical ninja.
Kakashi and her are close friends too. Kakashi isn't in love with her, but he pretends to and teases her by saying things like, "I'm going to marry you someday" or things like that.
Tsuki usually only smacks him across the head and tells him to stop fooling around.
Sasuke and her are still friends, but they do argue a lot.

She usually uses Water in her jutsu's, but she knows quite a bit about medical ninja stuff. She's also as physically strong as Tsunade. They would train together when they had the time. Tsunade and Tsuki are like family to each other.
Except Tsuki doesn't drink (sake) and doesn't gamble.
Tsuki also gets along with Shizune.

Yeah, long I know. *shrugs* But I didn't plan on writing a story about her so I when, "meh...why not tell her story so far?"
Yeah, I made this up all in one night. Yay me. XD
Everyone else also had a Naruto OC, so I wanted to make one since I've been a fan of Naruto for 4 years now. (I started watching it before it came to America)
I don't love anyone in Naruto, so I kept her single. And I'd rather it stay that way. ^^

Yeah, I don't draw much with the Naruto style, so yeah. lol

Wanna play a forum based RPG Naruto game? Then join Naruto-Sagas where you can join a village, achieve a bloodline, learn jutsus and compete against other ninjas!. Just register at:
http://freeto.b1.jcink.com/index.php?act=idx

Reshea: SOOOOO COOOOOOOLLLLL!!!!! I LOVE YOUR PROFILE!! I also have a Naruto OC and we have the same hobby! SINGING! YAY!!!!! *HUGS*

Wow. That's a great piccie, Cat-chan! She is an awesome character! You wanna know something that's weird? I actually have two Naruto OCs. One of them, Panda-chan made, though, so I guess that doesn't count, but her's is the real me. The OC I made started as me, but then she turned into an entirely different person! I actually have a piccie of her ready for posting, but I'm not putting it up unless someone wants to know more about her. Well, I've rambled on long enough, so great job, and I favie. . . . . . now!

Seriously, that OC is KICK @$$!! she is so awesome! I love the poses and her clothes are cool. She might be cooler than Kaori! O_O DUDE!!!! ROCK ONNNNNNNNNNN!!!!

I mena, I never even gave Kaori a last name...because I am bad at that kind of stuff -_-;

...they are equally cool! how 'bout that?

She is so COOL!

OMG awesome, you really seem too put a lot of effort into it ^^ good job, hope to see more of her *faves*
Go to page: