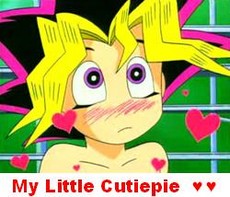 Hi, I'm Kristen but my friends call me Ki-Chan.

I have a fanfiction profile. Not only does it have my Yu-Gi-Oh one-shot story on there, it also has other stories as well.(Plus links to very cool videos!) If you wish to see it, just look for the author name, AnimeSnowflake.

Now I feel like posting personal info about myself. Well, here I go.

Name: Kristen
Nick names: Kiki, Keek, Ki-chan, Ki-chana(used by Pandinator ONLY and occasionally KionaKina), AnimeSnowflake(fanfiction pen name), AnimeSnowAngel (DA pen name)
Date Of Birth(DOB):1/31/92
Favorite color:Blue
Favorite animes/mangas: Yu-Gi-Oh, Naruto, Fruits Basket, Death Note (Yes, this manga has moved up to one of my favorites. I have to find good piccies of this on fanart, now, so I can put them on my favies!)
Animes/mangas that I used to watch/read or that I'm starting to watch/read a little bit: Dot Hack//Legend of Twilight, Tsubasa Chronicles, Poke'mon(but who hasn't watched Poke'mon before?), Yu-Gi-Oh GX(yes, when it started I did watch it a few times)
Favorite song artists: Cascada, Linkin Park, Queen, Kelly Clarkson
Favorite movies: Pixar movies, The Lord of the Rings series, The Lion King 1 1/2, Treasure Planet, the Shrek movies(heck, I like almost any movie as long as it has humor and isn't a major chick flick)
Favorite foods: Most sweets, Mac n' cheese, ramen(and NO, it isn't because I like Naruto from that show! I just like noodles)
Favorite animals:Penguins, Kitties(and once again, not because I like a character from a show. I've always liked kitties! THEY'RE SO CUTE!!!)
Favorite weather: Snow(I HATE not living in the north right now! I WANT SNOW!!)
Favorite PS2 games besides DDR: The Kingdom Hearts series(it's like a game and a movie combined into one. Has a very awesome storyline!)
Favorite school subject: Math(and yet Kay-chan hates it. How's that for weird?)

Favorite anime/manga characters(Kingdom Hearts included)
(if a name's underlined, that means that I really ADORE the guy)

I'm a star member nad co-creator of Chaotic Cosmos. Kay made the club and got me this pretty poster. ^^

And I support Maria's (Pandinator's) pairing! ^_^

kay finally gave in and created a Naruto pairing and I support it. ^_^

OMG! Kay actually did this. It's her little joke with bakura and pic. DUDE, I can't believe she really made it. XD

And we have my pairing/shipping: Kristen x Yugi (Nekoshipping). Don't ask why we call it Nekoshipping, Kay came up with it.

So, if you support my pairing, it'd be nice if you put my poster on your profile or in a fanfic or something.

My Naruto pairing!! I hope you also support it.

All right. I'm putting a list of the requests I owe from my contest so I remember what people have requested. Here's what I'm working on. . .

That's it for now.

Who is Kristen? she;s kinda...creepy looking next to rock lee...XP XP XP XP

I know we've never met (though you did reply to one of my comments on one of Kay-chan's pics), and you may not even see this, but I know you're a friend of Kay-chan (I am too) and I've seen your OC before. I had a dream a while ago that featured your OC that inspired me to draw a pic. I drew your OC in it too. If you'd like to go see it (this is the colored version), be my guest.

Hola! This is Straw (setokaibaslittlesis)!
A few days ago, I was no longer allowed on my old account. Probably due to some stupidity on my part.
So this is my new one.
You are currently one of my fan's, and this is to let you know if you wish to continue looking at my stuff.
If you don't, then that is fine.

I know we've never met (though you did reply to one of my comments on one of Kay-chan's pics), and you may not even see this, but I know you're a friend of Kay-chan (I am too) and I've seen your OC before. I had a dream a while ago that featured your OC that inspired me to draw a pic. I drew your OC in it too. If you'd like to go see it, even though it isn't colored yet, be my guest.

oh hi,
i dont think you' remember but you left a comment on my profile asking if I'd jin your contest.
I'm sorry for responding back so late.
but I would have joined had i been on
:(
lol
and thankyou.

Your welcome.
I love the picture of the bird.
I laughed so hard! 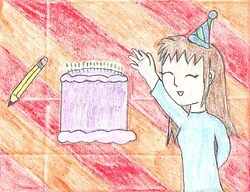