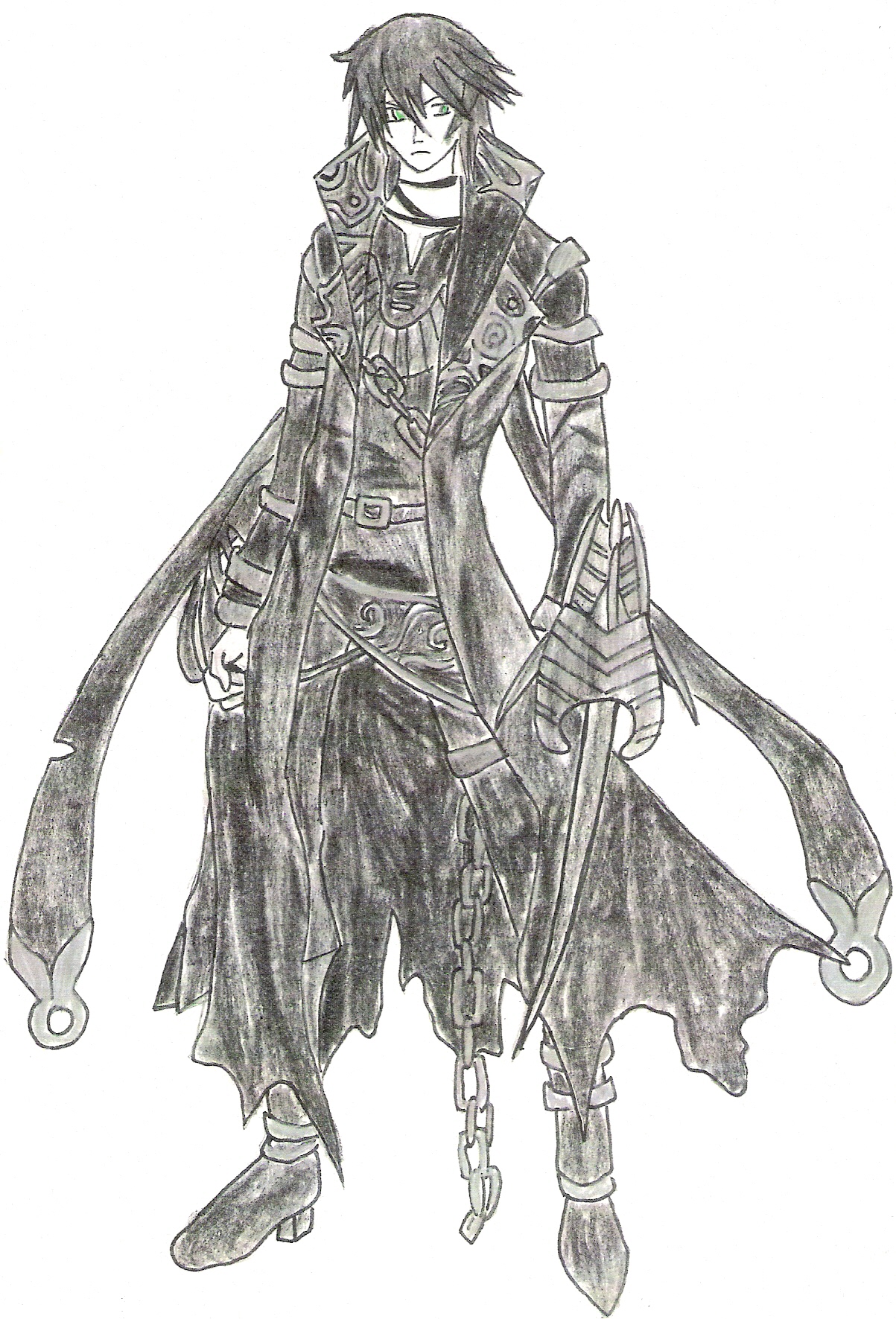 This is Sharidaken Tranqity here, my alter ego, but sometimes me. The only thing that would make this look like me is my hat backward, my dark glasses, and I sometimes wear gloves.

Note: This picture was made by my friend Ashly. This is here way of my style. Mine was different and I wanted her to draw different stlye but when I looked at the picture enough, it seemed to me that this picture seemed much better for me than my old idea of stlye. So this style I wear, when I'm in battle or fighting, and my other style will be when I'm hanging out or just going to different places.

Now what makes this Sharidaken's is that these were once his clothes that he wore in my story of Final Fiction VII. He's playing as Zack my OC alter ego and I'm playing as Cloud. So you see once he died I changed my clothes to his instead, somewhat to remeber him a little or that I once was a memeber of the Marines which is known as Soilder in FFVII. But in my other stories Sharidaken look like this. And for me I only look like this when I have my hat and glasses on. And by the way Sharidaken is older than me so that should make it clear to you all.

Anyway, here's some info about me.

When David’s family died in a car accident he lived with his aunt and uncle in Miami Florida. Because of that accident he was in a coma and lost his eye site that he has to ware black glasses all the time to cover his eyes from the light cause he can only see in the dark. When he was 10 he discovered that there was a studio were cartoons, anime, and all other fictional things with famous people all lived together; it was a world split into two between the people of the outside which is reality and the people inside which is fiction. For several years he grew up at the studio which was called Fan Fiction and became good friends and family to all the cartoons around him. Soon he would become a hero there and be the chosen one to save Fan Fiction from any evil.

Personality: David when he was young was very happy and excited to do almost anything, now after 6 to 8 years in Fan Fiction he takes his life more seriously. He’s sometimes laid back or cool when he’s not fighting, other wise he’s serious and has no affection when fighting his foes, but has a soft spot when he knows that they had enough or when someone important to him is hurt or dying. He can be quite romantic sometimes with Sasami and Téa, and has some feelings towards Layla and Lucy or any other girls he doesn’t seem interest in. When meeting someone new he’s either gratefully generous or sometimes not trust worthy seeing there appearance sometimes.

Life in Fan Fiction: David is known to be called “The One” sometimes cause he was the first human ever to live among the insiders of Fan Fiction. He’s usually teaming up with superheroes, bounty hunters, or any other kind of special force units to save and protect Fan Fiction. Other wise, he’s just hanging with his friends, the Ed’s, Spike, Cyborg, Coop and all the other cartoons; He’s a best great friend with Double D. He goes to Dexter a lot for any information he needs to do. He always checks up with Sasami to see how she’s doing cause he is her protector and must guard her with all his life. He tags along with a small Pokémon called Pikachu who’s his very own and is banded with a dragon of the Order name Arokh who both share souls with one another. His girl friend is a duelist in Domino City name Téa Gardner who he truly loves but is sometimes interfered with Kaleido Stage’s famous Layla Hamilton which makes it a love triangle around them, also Sasami cuts in the relationship only for a bit but not for long.

Abilities: David abilities are any power he can gain, General, Strength, Skill, and Will. He is also given powers by the gods of Olympus to use against his enemies, or any other gods from different planets. His weapon is the shield sword with the blade attached to an armor shield for protection. Sometimes he grabs any weapon usually to him. His special weapon is the Daevi Khadge, an Orb of light. Only David can wield it, no one else. When use of fighting, it transforms into a giant massive sword crystal made like and only moves or swings around by the hands of The One. Once stabbed by it’s opponent it destroys them for god as there soul is sucked inside the Orb’s power and vanishing there body into light or dust allowing them to never come back in the world ever.

dude you got mad skillz!

dude, that is awesome. And I like the story behind him. very original. great job

wow! This dude sounds awesome! Not to mention looks awesome too! I wish the God's would give me powers and I could gain like any power! Thats freaking sweet!

that is smexy! good looking guy!

Oooo... great detail. A great piece of work. You obviously put alot of work into this.

Wow, the outfit is really detailed, love it! And the whole thing is perfect, I wish I could draw guys like this)
BTW, it reminds me of Ragnarok Online, doesn't the picture have any connection with it?

oh...im not good at doing high collars...is taht OK? grr, i think i botched ur piccy. sry.
Go to page: