Your name JAMMIN STYLUS, and you are a ROLEPLAYER. You like to DRAW A LOT, and you are constantly ONLINE. That is, when you're not at your FULL-TIME JOB working in a SCREENPRINTING SHOP with your STEPDAD.

Watch me on deviantART: http://aeris7dragon.deviantart.com/
Watch my OTHER dA account (for my manga): http://ninthlifemanga.deviantart.com/
Follow me on Tumblr: http://aeris7dragon.tumblr.com/
Or my roleplay accounts on Tumblr:
[list]
[*]http://golgothastimeless.tumblr.com - Jam (formerly Jake English, grimdark vampire)
[*]http://golgothasundead.tumblr.com - Jake Strider-English (vampire)
[*]http://undyingtormentor.tumblr.com - Jammin Stylus (multi-muse self-insert)
[*]​http://turngoddeadhead.tumblr.com - Clove Strider (formerly Dave, trickster)
[/list]
I also have Pesterchum for all of these but Aeris. They're all the same as the URLs.

As is obvious, I'm obsessed with Homestuck. I'm still in love with Final Fantasy 7, though, and will likely make a very sad face if you tell me you've never played it.

I do requests and art trades, but I also need money so I'm doing commissions, too.

;-; ER! You know that feeling when you think of an awesome idea, but after working on it for hours, you slowly start to think it is really lame when you are done? Well, I have that feeling for the yaoi comic I was show off to you, but I promised I would link it!! BUUUUUUUHHHHHH! *runs away*

^(It is a comic strip I drew of young Loius and young Arthur when they were much different than they were now, but it was too early for me to introduce it. But I had to show it off to someone. ;-; Should I submit? I do not even know. It is too early!

Wait, you have a boy for a roommate?! DO NOT GET RAPED! D:< -Is that not the perfect shoujo moment if he is hot though? >:I lol

Unless he is gay? Ask him if he is gay this very moment!

(actually he's a homophobe >:U)

My other roommate's a guy, too, but his girlfriend is my best friend and he likes me as a sister. >w< yaaaaay i have a little brotherrrrrrr

>:U Maybe he is a gay guy acting like he is a homophobe. LOL, I love how I cannot let this perfect situation go.

A girl living with 2 guys, and one is the landlord! MY GOD! What power you have! You could seduce the landlord to make sure you get lower rent! *shot for crude thinking*

Also, tell your homophobe friend that I he does not have to hide his love for bromance when everyone is not looking~!

He's ignoring me now, hahaha. XD The last words he said on the subject were "oh god dammit", and then he went back to Minecraft XD OMFG I'm still laughing..... XDDD

I don't have to seduce him, I'm only paying 150 a month. And considering he says I'm the best roommate he's ever had, it's not likely I'll get kicked out anytime soon. >XD

(I keep showing him the yaoi I draw to desensitize him. XD I'm doing the same thing to my other roommate, though his thing is he hates puns and I'm the punmeister. Bwahahaha no one is safe from me. >BD)

thank ya for the fav

Thanks for the faves 8)

Fanart Central has decided to bring back staff-hosted contests!

Our first one for 2011 will be a Halloween contest starting on October 10, 2011. Please choose a Halloween theme you would be interested in drawing!

Hey! I'm making my debut back into Fanart Central! After... four years? You're one of my only two fans who are still on the site, so please come see my picture and comment when it is approved! Thanks!!! ♥♥♥

I definitely shall! <3 I was wondering what'd happened to you... XP

wats so cool is you draw uyourself EXACTLY how you look! ;o;

Or maybe I look exactly how I draw myself? >B) 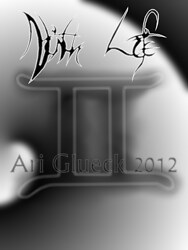