Pack Of 26 Wolves by Weirdo 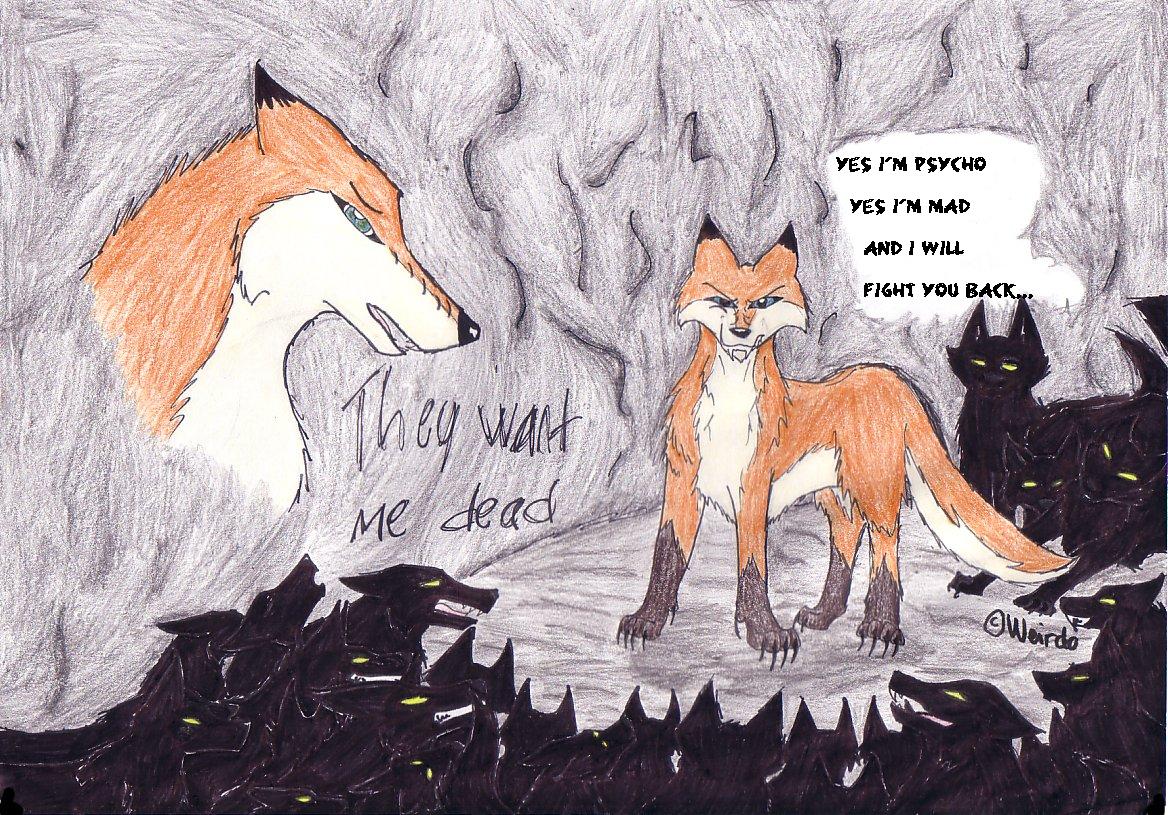 Grh, the result of my angstyness. ^^'

This pic has a story to tell, so listen it (in english, look carefully and think about it, do not just hunt the mistakes and think how it's drawn-it's art, it has a soul). You can probably see, that the wolf-ish fox-wolf-beast-vampire-thingy in the middle is quadroped form of my alter ego, so it's me. All the other, shadowy wolves, are my classmates. I've drawn each of them, and there are exactly 26 of them if I'm not included. If you'd know my class, you could even recognise a few. ^^

So what is the story behind this, you ask. Well, I'm not a liked person in my class, I've never been. Most people hate me and keep bullying me for nothing, but they haven't broke me yet. I have a strong mental "fortress", so it's hard to break me down, but inside that is that sensitive soul. Unfortunately my classmates, especially a few jerks, are really heartless b******s who don't care and probably don't even remember what feelings are. I try to be like they don't exist, but it's very hard-they even yell things to me at lessons. I'm very near to my mental breakage, and when it happens, I'm afraid that I'll attack them, what won't be a good thing for me. Without my URL friends it'd already happened. IRL I don't have true friends, they betray me when they want. That's why even my best IRL friends are in the pic, as a part of the pack of the wolves.
That's what this pic is, me being attacked by my classmates at a dead end, and I've put very much feelings into it. And I'm very happy how it turned out.

Comments? (NO FLAMES, and to this piece even constructive criticism is discouraged. I don't want to hear about anatomical mistakes in a pic what means this much to me.)

Why do I have the feeling thats how I feel in my class?

Feel pretty bad for ya!

Awwww, *glomptackles* Just ignore them ^^ .. either that or attack em.

^_^ Awesome pic though, the expressions are fantabolous.

P.S. it helps to picture them dying, no i'm not insane i just loath them all.

ya, i'm not that popular either in my school. but for the most part i'm left alone cause if i'm insultd i send a torrent of cusing, put downs, threats, etc.

Few badly spelt words to say to you, matey...
'Nil illigitum carborundum'
Translation? 'Don't let the bastards grind you down'
You sound a lot like me when I was at high school. I wasn't exactly the most popular person in class either. Why? Because I was quiet, just got on with my work, etc. I'm assuming you're pretty much the same, maybe? Well think of it this way; if they're acting the way they do now, after they leave school they're gonna suck at life, whereas you will prosper.

And that little phrase from my father helps a lot too :)
Once again, 'Nil illigitum carborundum'.... 'Don't let the bastards grind you down' ;)

That is really emotional, most ppl in my class are like that to me so i can relate to your pic. And i am so much like you... wow... im overwelmed by the story of this pic. Keep up your strong mental forcefield and kick all their butts! You'll show them when there all junkies and your rich! *high 5s*

Juat when then wolves were about to attack a roar like howl is heard. "Rrrraaaoooowwwww!!!!!!!" In the blink of an eye a creature came swooping down an slashed at a few wolves sending them flying back into a few of there pack mates. Tha creature lands in front of the fox like wolf vamp. It was a beautiful feline with wings. (here what I look like: http://www.fanart-central.net/pic-580614.html) The feline demon growled with fury. "RRRRrrr!!! Leave her be!!!" But the wolves just roared back and lundged. The feline then opened her mouth and a combo of lighting and fire went flying at them all. They where all not only zapped but sindged as well. The whole pack then turn tailed with there tails between there legs yelping. The feline then turned to the fox like wolf vamp. who was still on guard.
Feline demon: *face softens and smiles* "Hello there! I'm Nekoyasha. But u can call me Neko! And..." *extends paw out to u* *gives u a warm smile* "Lets be friends!!" v(^w^)v