Name: Julia, but please call me Weirdo, I hate my IRL name. >.<
Date of birth: 5th July 1993
Home city: Turku, at Finland as you can see from my "Location". I hate this place, and will move away as soon as possible!
Hobbies: Drawing, writing (mostly poems, but also songs and stories), roleplaying, reading, being on comp (yes, I'm a nolife XD), crafts
Sexual orientation (or whatever you should call it): Lesbian
Alter ego: Polymorph critter, usually a fox furry with a long, light brown hair on a ponytail. Has a very, very long and poofy tail. My colouring is always terracotta orange with cream stomach, underneath the tail and half of the face, and dark brown legs and eartips.
Other information: I'm a leftie! (said that because many people have been surprised about it, hehe)

Well, I quess that's about the little informations about me. I am quite weird, very social person, and I've noticed that I sometimes cause awkwardness around myself by just being myself, which isn't nice. I don't try to change myself because of that, though. I am also very lazy and slow at doing anything. I love my friends and care about them even too much (they've told me so XD), and I hate fighting. That's why I'm even too nice at times. But when you get me angry, I'll be angry for a long time. I do forgive quite easily, though, if I know you mean it when you apologize.

My family includes mom who hardly ever gets anything done in time, annoying little sister (two years younger than me), and small, very furry (and often also ruffy) mixed breed dog, Alejandro.

I like/love...
- My girlfriend~ She's the light of my life, even though it's a cliché to say so!
- Animals, especially cats!
- My friends
- Drawing, duh
- Writing~
- Silence (meaning people don't yell all the time etc)
- Good music
- Peace
- Good food
- Chocolate
- Ice cream
- Understanding
- Traveling
- Freedom
- Love (..when it's not the torturing type)
- Scent of some people n3n
- Any kind of nice scents
- Nice clothes

I TAKE ART TRADES AGAIN!
I do not make commissions, since I don't know how should I take the payments (by post as cash or straight to bank account, should I make a Paypal account...) etc. If anyone knows about commission stuff and has experience of it, I'd appreciate that information!
Here are the rules for the art trades:
- I won't draw porn! Artistic nudity would go, though, but I can't draw naked men if I don't hide the... "Thingies". x)
- If you want me to draw something which can have a pose, tell me what pose do you want. I'm not creative with them. ^^' Also if you want me to draw a situation, describe it well if you want at least almost good quality pic.
- Tell me do you want your pic as a scetch, lineart, coloured, computer art, pencil art, watercolour painting, or marker art - and remember that I'll want the same from you! Same goes for backgrounds, and if you want one, tell me what kind of backround you want. Just some colour stuff, forest, city, a room..? If the backround you want is clearly in your mind, describe it very well!
- If you want me to draw your character, I want an example pic of it. Even a good description of it won't do, since I often misunderstand stuff and the pic might turn out something completely different from what you wanted.

Currently happening:
Not so busy anymore, might even post pics more again. :3 If you want me to look at your work or anything, just ask!

P.S: Remember to check out my stories, too! Well, actually they are poems, but check them out anyway. I want comments to them too! :3
~Weirdo

I feel about a thousand years older...

lol. sorry if I offended u 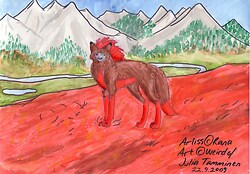