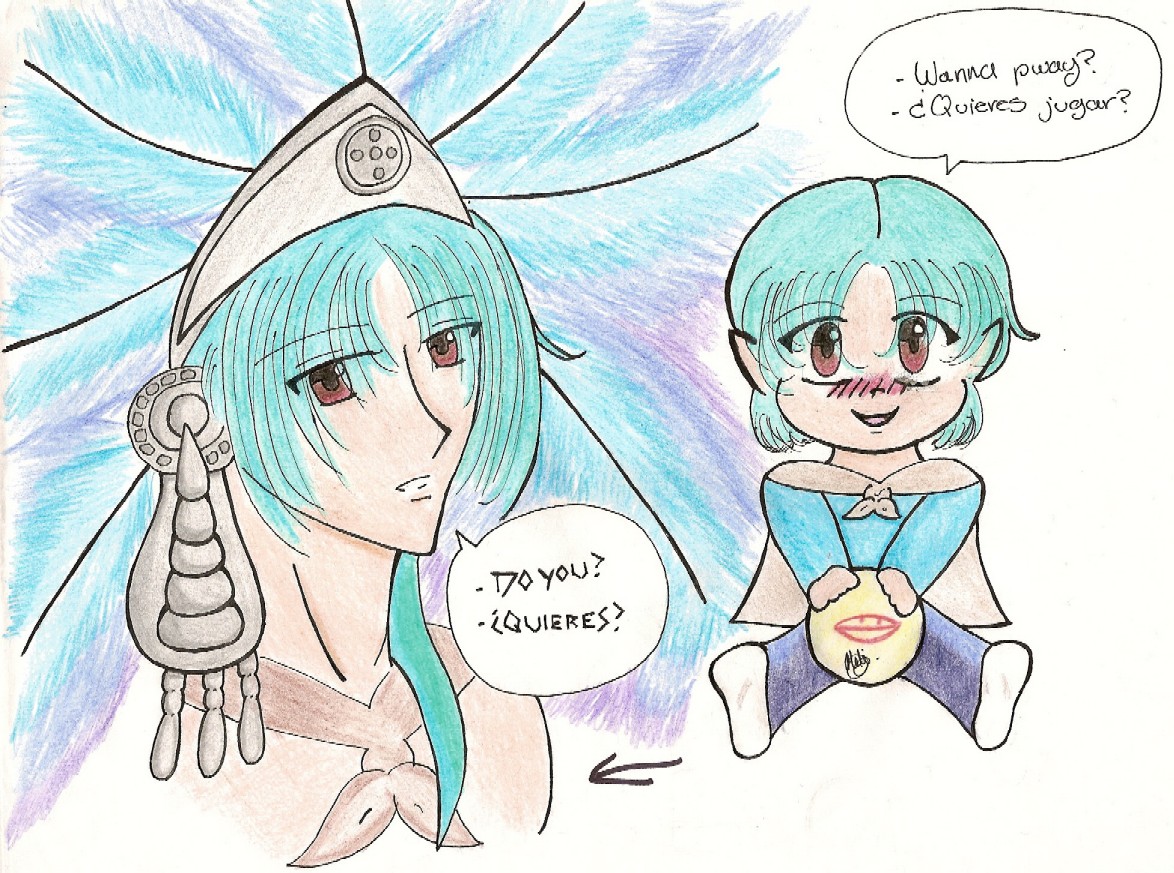 Me: HOLY MOTHER OF SPAM!!! It's widdle Lyon and big Lyon! *breathes slowly* AND HE IS BETTER LOOKING THAN EPHRAIM!!!

Me: Well of course he has to be... he has my genes too! *snickers* Anyway this is my son Lyon, he has a twin sister which I will be posting later. He is a sweet boy, very kind and blushes easily. He likes to play "el juego de la pelota" (I forgot the original Nahuatl name, but it's the game ancient pre hispanic civilazations played. Example: the game in El Dorado with the ball and the loop thing, yeah! That one!).

He has a cocky and mocking side when it comes to confrontations; he can be the best gentleman there is when he is normal, but if it involves fighting or a competition he changes quickly. He has a slight pervy side (thanks to Ephraim), but once he thinks or sees something he begins to slap himself quickly to avoid blushing. Once he does that he looses his cool, and looks like a little dork. Well I don't know what else to say about him. I WUV HIM!! *huggles little Lyon*

Me: Coz I felt like making you an aztec, now shaddup or yer grounded!

Me: jejeje, actually it has to do with me wanting to draw something related to the aztec culture (I WUV THE AZTECS!!!), and then I remembered I had yet to draw my monsters so I said: "I'm making him a 17 year old Aztec bisshie and a 1 year old widdle chibi! So yeah...

*I know about the name, but the chararcter is MINE! Oh and possibly, maybe "Ruby" (Hazel's daughter) Might own him later too... *grin*

...Doesn't Lyon have purple hair tho?

Hehehe Lyon from Fire Emblem yes, this is Lyon an OC I made for RPing, he's suposed to be mine and Ephraim's son.

Heh, you can realy color.
I'm pretty sure the sport you're thinking of is called "Pokatok".

(Yay, someone else who's seen El Dorado!)

Thank you for the comment! The game actually expands from arizona to southern america (I'm not very sure where it ends) so it has many names given to it by the many ancient cultures that lived in America. XD W00T for El Dorado! I like that movie a lot =3

And I'm moderatly sure that pokatok is Mayan.

Tanks for the comment and the fave Jess. =D

The older one says: Do you?

sure i'll play with u!

Thanks for the comment and the fave Jess. The little guy is saying: "wanna pway?", meanwhile his older version says "Do you?". lol

Thanks for the commment and the fave Jess. The little one is saying: wanna play? The big one says: Do you? Lol, I felt like making him a bisshie Muahahahaha!!!

AWW thanks! He is, isn't he! *huggles widdle Lyon* Thanks for the comment and the fave Bianc! =D

Zephyr: ... Why are you looking at me like that?

Marth: Are you thinking that my son is a pervert?

Me: Well no. BOTH of you are perverts! :p Oh, Melissa, did you know that a french well known town is called Lyon? ^^

Yes they may be, but Lyon slaps himself once he thinks something cursing his father's genes, lol. About the town Lyon, yes I did know. But I named meh boy that since Eph asked me to, heheh.

T Lyon: Whoa! Don't drag me into your wrld Zephyr!

AWWWW These two are cute! Wheee! Thanks for the comment and the fave Gina! ^-^

Thanks for commenting and faving Hazey! =3

Thanks! Lol, I tried my best to make him as bisshie as I could! ^-^

Ruby: I WUV LYON *huggles his arm and looks at him inocently* Lyon wuv Ruby?

Me: *whacks him with my shoe* That's when you were cute... now you're like Ephraim...

Me: Those two look cute together don't they! ^-^
Go to page: