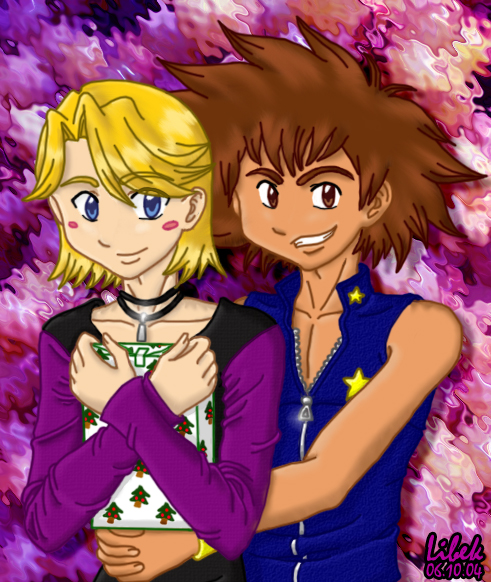 I'm tired now. But here it is, in all its glory. Enjoy.

Hey i think i already asked you but how do you color your art...i really like it....and how long did it take you to get that good?!?!?!

What did my random babbling have to do with you? O.o

Well, yes, ranting homophobic stuff is generally out of line. ^_~ But thank you for saying so, and I can tell you're making a big concession in doing it. That's always appreciated.

Although -- WARNING: falling opinions -- I'd say I have a fair reason to think taito was one of the things Toei Animation had in mind -- Taichi's image song, "Yuuki wo Tsubasa ni shoote", plays during the Japanese version of the series when he and Yamato take up hands to face down VenomVamdemon and again when Yamato appears to take him in his arms during the battle against Piemon. The song talks about being strong, being able to do anything, because of a person held dear to you (to quote, "Because I have you"), and even more blatantly references a Japanese myth -- one the Star Festival is based around -- about two stars which meet only once a year, personified in the myth as lovers. (The reference in the song is, "I can cross over to the other side of the sky.")

As for the blushing bit -- well, for one, Yamato blushed a fair amount in the show itself. ^^ He's cute when he blushes. Two, I see him as the uke. XD Three, he looks good in pink, whereas it rather clashes with Taichi's skin tone. ^_~ And four: because Taichi's the one hugging him and giving him a present, so he's the one who has reason to feel fluffy/overwhelmed/mildly embarrassed and thus the one who has reason to blush! >D

And yes, Yamato can cook. ^^ A bit better than the dub would have you believe. :( It's not mystery meat! It's really really obviously just way too spicy, and he did that on purpose because Takeru was making fun of him for having a messy apartment! >D Do you think his dad would've sat down to eat it all happy-like and then yelped in pained surprise if he expected it to be bad? ^_~

though i usually don't support this particular pairing, you did draw it well, and nightmareyasha was out of line. they're friends, close friends, and the avid watchers of the show can never tell what the writers have up their sleeves. one thing though - why'd you make matt(yamato) the one who blushed? nothing wrong - just wondering why you picked him instead of tai.
-squire
p.s. - at least they're guarenteed food, ableit maybe not the best - matt can cook! ^^

WAIIIIIIIIII!!!!! That is totally kawaii! so adorable, and you draw them so well! as for nightmareyasha, you are an idiot, since you're not supposed to comment unless it iterests you. i agree with libec, you are utterly insane. Taito forever! <<shows peace sign>>

Well, I've watched the whole show -- both series which featured Taichi and Yamato -- in both English and Japanese. I've paid close attention to their characters, and I've taken note of things outside the immediate show (things like Taichi's Japanese image song, "Yuuki wo Tsubasa ni shoote" [loosely, "I'll Turn My Courage into Wings"]), and I think that not only are Taichi and Yamato really cute together, but there's actually a lot of stuff in the show to back it up. ^_^<br />
<br />
Of course, I didn't type this all in caps, so I'm obviously not as full of passion and seriousness and half as psychotic as you. ^_^

GOD THESE TAI AND MATT THINGS U DAMN FAGS<br />
HAVE U NOT WATCHED THE SHOW AT ALL.

No clue who those characters are, but the figures are drawn wonderfully and your coloring skills are awesome! =3
Go to page: