Kiss of Rose Princess by luckylace222 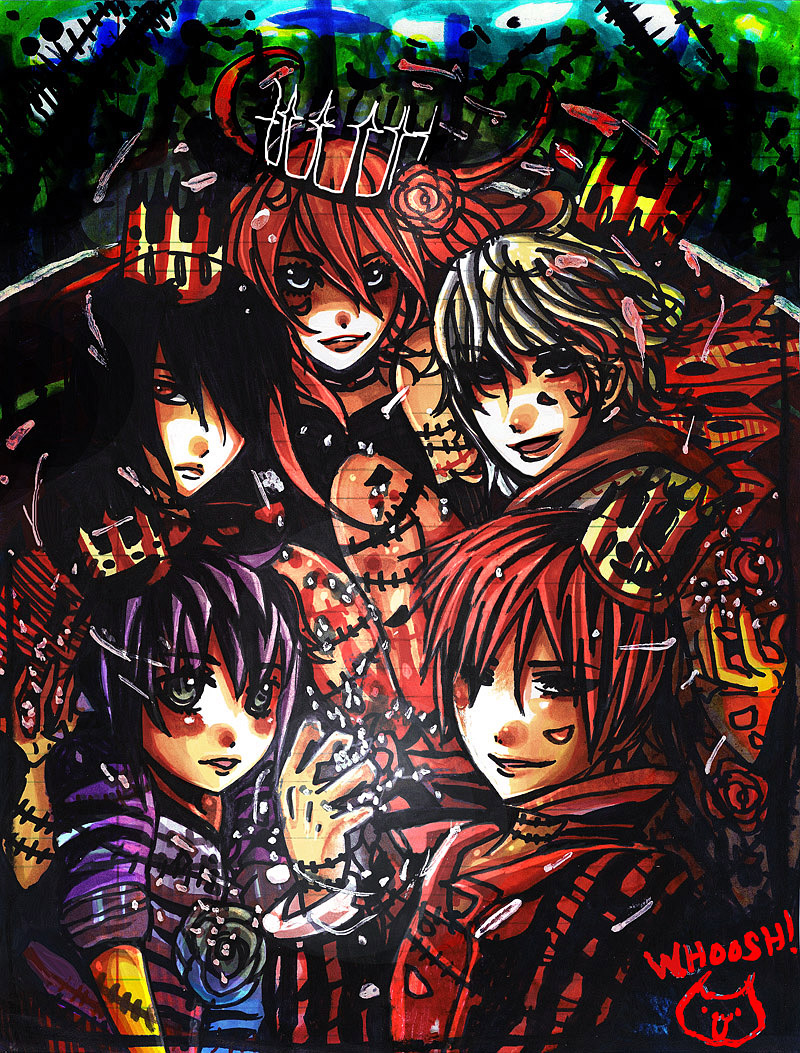 This is some fancy Barajou no Kiss fanart for my friend Stephanie. She does not even know this manga, but I do! Thus, she will take it with grateful indifference!

I drew it with permanent marker and colored it with Crayola markers. Then, I photoshopped the lighting effects on the hair and petals with the good ol' modernized Photoshop. <3 It has been a long time since I've used PS. I also drew this on notebook paper, because I am too cool to draw it on anything else.

I usually do not read much shoujo manga(except Skip Beat and some other fun ones >o>), but this one had its blend of fantasy action and fun. I told myself I would only draw fanart for manga/anime that I am exceptionally impressed by, and although this manga has its boring/cliche flaws(as most/a decent amount/no, ALL shoujo manga do), it still has potential. Actually, that is a lie. In AP English Literature, I decided to ignore the McBeth readings and draw the first thing in my head; pretty knights. It has nothing to do potential. Just boredom. However, fanart from Lucky of the Lace will ensure its anime status! huhuhehehuhu

*scratches her butt unproductively and eats rice with her left foot* ENJOY my fwiends! ;> I'll be coming back soon!

Thanks for that fanart btw. It's sitting in my new "friend's art folder" underneath my bed in a contained environment >:D

WHAT THE. WHAT. THE. WHAT... THE...
i'm stuck. There is no more words in which to express your amazing gift of all awesome.
Oh, except for:
I CAN NOT BELIEVE THIS IS DRAWN ON NOTEBOOK PAPER. WITH A SHARPIE. AND COLORED WITH FREAKING. CRAYOLA. MARKERS.
*heaving breaths*
OUISAAOGGGGGGGGGGGGGGGAAAAAAAAAAAAAAAAAAAAAAAAAAHHHHHHH!!!

You do this to torture the fathoms of my mind. I wouldn't believe you if you said otherwise.

How was the manga? I honestly believed I actually was temporarily fond of the manga because during school, I needed something to rely my sanity on, and it was manga, no matter how cheesy it was, lol. It was an insanely cheesy manga, but good art and nice poses. ;) And hot guys. HHEHEHE

You comments are incredibly entertaining/exciting! All the time in the world! Try notebook paper and crayola yourself(no, scratch that, I am a bad influence. D:< That notebook paper was a b*tch!) Anwyays! Thanks a lot!

This is gorgeous! 8D I loooooove the use of colors you got here...

Hecks yeah! Any shoujo fan must know of Skip Beat, and if not, they must make the greatest muscle-cracking carpel-tunnel-causing effort to read it all! However, the chapters are monthly updated and they take soooo long(especially the main relationship). '-' AHah I am just ranting, but yeah, I read it! great manga!

You have gotten even more awesome yourself! Your art has improved and I can see that tablet at work-revealing your new digital potential- yeah! This change is good. GOOD! * French accent* Thanks for the comment!

I dunno if I already said this is awesome.. Ur so hardcore >:I
I love the WOOSH xD Y'r rlly awesome xD I need to practice more o.o !

That's right! Practice makes perfecto! :PPP Thanks a lot for the comment! xD

Squee thats awesome and I look forward to your return of epicness!!! as always I love the way you color and your art in general.

You know, I always enjoy the incredibly lovely art you post, but I also enjoy your words of random awesomeness in the artist comment just as much! xD :D

Ah ha ha, an amazing picture Betty, I love the way their skin is colored, the crazy awesome crammed detail, and all the dark color(makes that purple really pop, maybe because of the light source next to him though)
Whoo! Overall I just love this art! :D :D :D *dances randomly*

P; "words of random awesomeness in the artist comment?!" What are yous peaking of? My diction and words are perfectly organized and appropriate for the scenario- ALWAYS!

*gives Zeromidnight a neck massage with her Asian toes*

Thanks for the comment! Cannot wait for more of your art to come when I come back!

Ooooooh, I like it. There is so much going on in this picture. And the colours, the colours!! Very pretty.

----nagging time------
You don't notice the lines of the paper much, but I wish you would have used a different kind of paper =( *nag*

]; Yeah, I drew a permanent marker sketch of it on notebook paper, but because of my inner OCD artist, I turned it into a full blown markered picture, so I took it up as my own, raised it with my own milk and tears, and turned it into a healthy college kid with a girlfriend and everything!

-And here it is, all grown up, but still immaturely showings its baby notebook lines, but I look above and beyond the lines and see my dear, hard-working Johnny boy working for his keep! Soon, when I grow old, he'll send his other notebook paper grand children to visit and play Monopoly with me during the hot Summer days, and outside, I'll notice him hugging and talking sweet words with his wife like they were 17 years old again! Ahh~ those were the times- back when he and I were still premature notebook paper and artist.

-went on a Red Herring there- LOL thanks a lot for the comment!

Aww, now I regret the nagging. You just do not say to another person, that her baby has lines in the face... that was really very rude of me D:

You really have a way with words.
It is still a very beautiful baby!

Wow...you did that with Markers and Crayons!?! I am insanely jealous of your artistic abilities. :D

I hope life is treating you right.

A kid told me I was short on the street.

*runs to Rubius and cried ferociously on his knees*

ohhhh so draw something for steph but not meeeE?? I see how it is... *cuts self in corner*

Now now little lady! You just wait for it! Your piece might come in a minimum of a couple of years, maybe more. P; Depends on my mooooodd!

Well as long as you don't wait more that 50 years i will be fine!

Great news everyone! I coincidently decided that my life was going to be too busy- what with the baby and the diapers and the husband and the cannibalism of said baby and husband- I will have to make Brandon's picture after(quite random number) 51 years!

But im wearing my lucky *and only* sombrero! i demand that the luck come in and annihilate the wait time now!
Go to page: