Hmm... it appears that all of the fonts are the same. Ah, well. Anyways, here I am. I suppose I go by DuctapeNinja here... no I'm not a ninja... but I do mess with my friends by popping in and out on them at random without them noticing. It keeps them on their toes. However, I do make some things out of ductape (ie: my wallet and such). I did actually make a ninja suit for Halloween last year. That was, indeed, quite fun.
Yep, so I live in northwestern Illinois and yes, it does get quite boring after a while. I've always like drawing and writing stories... despite constant writers block and the fact that sometimes I'll get a tad OCD with one part of a drawing.

My goal in life...? My mission is to destroy a certain someone... and resurrect my cl-- oh wait. Blast, I've said too much. OK, no vengeance. Well, other than that, I suppose I just draw randomly in hopes that I perhaps get better at it, that people can get a laugh or two out of
my work... aaand, in some cases, just to waste time.

Alright, I'm done with my rant, so I belive I will be taking my internet based leave... LIKE NINJA!! *throws smiley face emote on the ground which explodes into a cloud of smoke* [loud footsteps moving away] [distant crash followed by thud] AARGH, WHY?!! Stupid chair...

u know whats weird...u sound like u could b like my friend rebbecca in male version.... she calls her self the ductape inja..Oo weird..

Hi, there everybody... I guess I didn't really get uber crazy on the people commenting my page. XD Sorry 'bout that. How's it going? XD 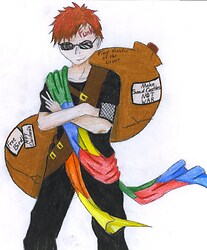