This is SO my page D:! You'll get to hear about me and my definition of the meaning of life--aren't you EXCITED?

I think it's a little obvious to say, but I'll do it anyway--I breathe in anime/manga and shounen ai/yaoi instead of oxygen.

Be mature, alright? I'll support any pairing, het or gay, so don't come to my page and bash any of it.

Oxygen in it's purest form: Yami no Matsuei, Tsubasa Chronicles, and Ouran Host. DBZ will always be my first love and I'm not really too into Yu-Gi-Oh anymore. :X It's lost it's touch after the series was over and they moved to that shootty Yuki bird guy or whatever.


I don't take requests because I'm saving you the trouble of hating me! Simple as that, I suck at requests. Can't ever seem to do them right. So, yeah. You're welcome to suggest some ideas to me! :O But please don't suggest that I draw your character with Kaiba 'cause OHOHHOH, you're sneaky X) And no, I don't make exceptions.

Sorry I don't post too much too. I do my best, but work, school, and artblocks rape me more times than I care to admit. If you're looking for some friendly chatting or anything, however, feel free to check out my LJ!

I update that more than I do this. xD


Uh, I'd also like to randomly add: as much as I appreciate the thought, all comments that have the "!!!!!!!!!!!!!!!" that stretch out the page, will be deleted. It's always annoyed me when I have to scroll far to the right to see a picture and I won't make others do the same for my own picture. So please, let's not have heavy fingers on those exclamation points! :D

And of course--this'll never change:


DON'T PUT THOSE frackING CHAIN LETTERS ON MY PAGE. I know I'm being dogy, but I hate to see new comments that have NOTHING to do with me or my art. I frankly don't care about some random person who died and will pop up behind me if I don't send to 11 people!!111 I won't hesitate to dog.

i rili lyk ur art!

love your ygo comics
try ash vs yugi at some point!:3

That you WE'RE ALL BLIND!!!o.o

I love your comics 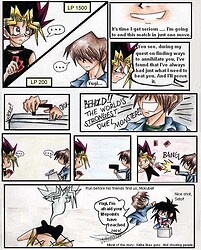