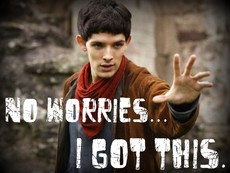 I'm an English major in my second semester of Sophomore year at college. I love to write and want to be a famous author someday. I am a Christian and I fully believe in the sovereignty of God. I am not going to judge you because of what you do or what you believe, I will be your friend regardless.

I tend to go through "obsessive stages" although that sounds kind of creepy, so we'll call them "Squee-Attacks...of DOOM!" Anyway, I get really into a book, show, movie, whatever, and it's all I want to talk about. I just got over Legend of the Seeker. Now Merlin is in the forefront of my mind. I don't think I'm going to get over Merlin for a while (like FOREVER because, come on guys, if you're reading this, you've obviously WATCHED the show and it's just fantabulous!), so you'll have to stick with me. If we are having a conversation about why if naked mole rats are called naked mole rats, then shouldn't hairless cats be called naked mole cats (that really is a good question, please let me know the answer as soon as possible), and I suddenly remark, "Oh my gosh, Merlin is amazing and he killed a griffin and a basilisk and then he lifted a car and went to the moon and proposed to me," just ride it out. I'll get out my excitement eventually.

Like I said - right now my big obsession is the BBC show, Merlin. I love the bromance between Arthur and Merlin but I am NOT a slash fan and I will tell you up front, NONE of my Merlin stories, nor any other story from any other fandom, will ever be slash. I only write friendship. So if you're ever reading something of mine and you think "this is borderline slash" then that's fine - it's your interpretation and I won't begrudge you your opinion. But know that I only mean it to be friendship. If you wanna put on your slash goggles (or shloggles, as I like to call them) be my guest.

As far as Merlin pairings go, I was a big fan of Merlin/Gwen in the first season but now I'm Merlin/Gwen friendship and Arthur/Gwen. I find a fascination with Merlin/Morgana even though it will probably never be. I thought Uther was quite lovely with Catrina the Smelly Ugly Troll of Doom. He finally found someone he's worthy of. Maybe. I call that ship "Utrina" or Catruther" or "Utroll" or better yet "Epic Hilariousness." Ha. Morgause/Cenred was kind of cute in a weird way until (SPOILER ALERT!) Morgause offed him. But yeah.

Oh and I'm the captain of Team Merlin. 'Nuff said.

That being said, there are other things that are always in my mind. Like cats and squirrels and Harry Potter. I also like platypi? Platypusses? Platy-people? No clue. Which brings up another question: if some sick, terrible excuse for a human being decided to cook up some Platypi in a pie, what would they call it? "Platypi Pie?" Or maybe "Platy-Pi squared"? I'd name it Gilderoy, but that's just because I think Gilderoy Lockhart was a platypus in another life. ANYWAY...

See what I mean? But I honestly believe that is a big reason I can be entertaining...

Oh, I'm scared of a lot of stuff. Like elevators. Spiders. Storms. Stupid people in large groups. A group of stupid spiders waiting for me on a stormy night inside of a haunted elevator. Stuff like that. Oh yeah, and black rocks. Don't ask. Just go watch "The Knowing" with Nicholas Cage. Yeah, I'm a bit of a wimp. So what?

Alright, I'm running out of things to say, but that is mainly because my feet are cold and I have vowed not to move or even put socks on until I have finished this introduction. And as my toes are turning a lovely shade of blue, I think it's about time I allowed you to truly let in what I have told you here today sink in and speak to your soul.

Now that you know me a little better, do you know what you should do? READ MY STORIES! RATE MY FANART! REVIEW! MESSAGE ME! SEND ME A PET PLATYPUS NAMED GILDEROY! What? You know you want to.

Hey, Mel, you wouldn't by any chance... know why it won't let me log in to the forums, would you? I activated my account, quadruple checked my password and username, and I'm logged in on the regular site... and I can't figure out how to contact the admin... If you don't know, it's all good... I just thought I'd ask since I'm confused... lol :)

Anyway, thanks SO much for saying hello, it's great to meet new people, especially when you just join a site and know no one! :)

nice to meet u Lizzie

hmm not really and oh lol

and my name's Mel