[quick word from the creator] to everyone out there...this is Noah R. After you meet him...your life will never be the same. You have been warned.
got a problem... GTFO!

*hey everyone! long time no talk! Letting you all know you can come find me on DA or if you wanna talk just send me a message! love meeting new peeps!*

Nicknames: NO, No-No (by Thyme only), Pharaoh-Boy, The Kid, The Mutt, The Mutant, Gimpy, Soul (long story on that one)

Home Town: Epaliska, a realm in the Egyptian afterlife. Also referred to as the Field of Reeds

Date Of Birth: November 1st Day of the Dead

Goal in life: "The name's Noah mother fracker don't you ever forget!"

Personality: Asshole, laid back, to himself but can be all up in your grills about it.

Strengths: Despite his hard past, Noah's very good at giving persuasive speeches and helping the ones he holds close out of anything. He is the only one that will always see the glass at half full.

Faults: He's a jerk, has an attitude problem, a problem with authority, gets violent quickly and his superiority complex get the better of him. He's also self conscious of his appearance.

Physical Defects: His right wing is completely destroyed and rotting at the bone. His right ear is taller than the left, his left arm is demonic, his right leg is a raptor leg, he's blind in his right eye and def in his left ear.

Tattoos: The word "Biohazard on his left arm", the Biohazard symbol on his right thigh, the word Sin on his write wrist, a Celtic seal on the left side of his back. Red cross spanning from across his shoulders and down his spine.

Piercings: two on his left ear, three on his right, his entire tongue, his lip it connected with a chain to his left ear, his entire spine, his tail, his wings, his nipples, his hips, his lower stomach, his penis.

Addictions: Apart from fracking his wife and anything, he's a compulsive gambler and smokes up with Soul

Kiako: His byatch and best friend. fracks her ever chance he gets. Better put as his Juliet

Avien Sky: Same as Kiako, minus the Juliet shoot, but they go way back before anyone.

Titan: Brought him up and they chill now

Neka: His lover is one thing you can call her

Soul: their practically the same person so you get the picture

anything else just ask mo-frackas

Howd I miss you?

heyyy!
sorry haven't been on much

I'm not really doing trades/request now, but your art looks awesome so I'm gonna have to say yes o_o

i just fail at girls XD

if you want here's my DA account i have some better art see what you like and let me know (:

Noah we should all chill then

Marage:Splended! Come over here and sit down.... *walks in the other room and sits on a couch across from another*

Ayame:Sit anywhere you like... *smiles then plops down by Marage*

Noah: uhhh *walks in with tmem* can that thing support my weight? *points at the couch*

Marage:I don't know? We'll have too see then, now won't we? *smiles*

Noah: if i do i'll buy you a new one *swallows hard, and sits down*

i posted a picture of Noah but it's on deviant art

you are?! ok here's the link http://x-aviensky-x.deviantart.com/

Ayame:Man, that must of hurt?

thanks for all teh faves!

You can add me on msn if you want: blackpaintbucket@live.nl

Ayame:Just fallow me.... *walks along a little path*

Noah: right behind you *looking aroudn his ear twitching*

Noah: full of energy are you?

Noah:...*smiles lightly* it'll be nice to meet them then


Talk to you later! *waves*

Noah: you're a cute kid

Noah:*looks up* listening to music *grins*

Ayame:*walks to a little house* Yup! *smiles and walks in*

???:Hello..... *a young woman walks in* Well hello there. *smiles*
Ayame:Hey, Marage this is my friend Noah. *smiles happily*

Noah: sorry how i talk you know

Marage:Oh, well when you are around me I perfer you speak alittle more polite, but besides that its ok. *smiles* Oh, he went to town....
Ayame:Oh....man!

Noah:*grins, holding his hand out* Noah nice to meet ya

Marage:*takes it and shakes it* Its very nice to meet you. *smiles brightly*

Noah:*grins* you a god too?

Marage:Yes, I am....Godess of earth. *giggles* If mother earth is happy, so am I.

Noah: sweet i'm an earth element if that anything to ya
Go to page: 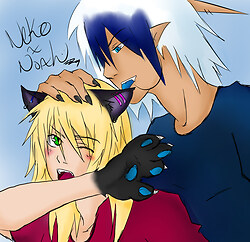