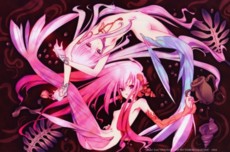 working on:
drawing more art (:
have two scans that need coloring, one is almost done but sloppy

won't be going on as much becuase of school but hopefully enough to keep in touch :D

might start working on:
on this great random idea i got from watching this weird movie i didn't like that has a person stuck in a snow globe. so far i know that there will be a guy with pink hair and his name will be summer and he has a "firefly sword"
a really short girl,
another guy that i am recycling from my previous comic which i named Alchemy (i looked up unusual/unique names on the internet-aren't i smart?),
3 others that stand for Fall, Spring, and Winter (named Frost, September and Flint)
and it shall be smexy. :) The summary shall be something like this....
"A girl finds a snow globe in her grandmother's attic, the snow globe is all frozen so she takes it with her, curious on what is inside (a snowman, or the city of New York?). As it melts she sees a figure of someone, she thinks it's a fairy with pink hair. But as it thaws all the way the figure begins to move, and the girl goes into "shock mode" (marinrin style). The little figure turns out to be some protector of the Summer months who is called Summer (weird huh?), and has a sword that works like a firefly, with it he blasts himself out of the snow globe. He thanks the girl for saving him and then declares that she will help him find these 12 stones for each of the 12 months.. the girl is still in shock, so good luck to him. And the adventure begins... (that is after the girl gets out of shock and stuff). They also encounter a guy that is like a shadow named Alchemy (or Al for short--he is the character i recycled from my previous comic x)) he is also after the 12 stones, for it is said if you have all stones, you can have your wish......." And yeh...i should end this super long summary here, because you are prob thinking why is she making me read this looong thing!!
so watch out for it, it might replace the other comic since i cannot find my papers/pages!!
see you soon!