Member Info
Hello everyone. I'm PyroDragoness and I'm also under the same username on DeviantArt. I also have my own personal, little art website here Akai's Art where I keep all of my art works that I've made. NOTE: The Spyro website link that I had no longer works because the server had shut down for good, it was very dead anyway so *shrugs*

My favourite games are:

Spyro series (Especially the first three :D!)
Dragon Ball Z: Budokai series
Okami
Zelda series (Twilight Princess and Ocarina of Time are my faves :)!)
Sonic (I'm fairly new to the Sonic games but I have quite a few now and so far I love then :D!)
Mario (I like the new Super Mario Galaxy I just bought :D!)
Ratchet and Clank (I only have the first game but I love it :D!)
Super Smash Bros. Brawl (One word: AWESOME :D!)

My favourite TV shows are:

I probably have other fave games and TV shows but I can't think right now. lol

No, can't say I've heard of that one before. Is it any good?

Welcome to FAC! :D I lurve Spyro! I have a few Spyro OC's of my own! Sandy, whose a Princess Dragon, King Ramond, Sandy's father, Saffron, Sandy's dragonfly, Gem, Sparx's girlfriend, Night, Spyro and Cynder's daughter and Ruby, Sparx and Gem's daughter who is Night's dragonfly! I have a lot more OC's but they're not really im[portant cuz I just made them up for teams in my story! XD DO you have any OC's?

Thanks and That's a lot of cool OC's. Yeah, I've got tonnes of OC' too. 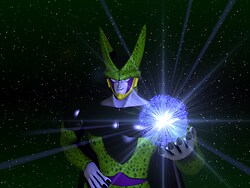 My 3D Cell with Ki ball