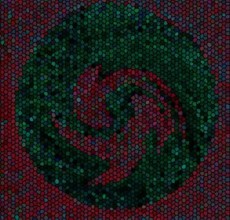 I am a hard working American woman, brown haired gray eyed like so many of my family. In fact you see me you see most of my cousins, aunts and mother. My family goes back a long way in America, on my father's side through a great grandfather I can trace my family back to the Mayflower. I am related to both famous and infamous people throughout history. since this nation was founded my ancestors have been involved in every single war, from the Revolutionary war where my ancestors supplied goods to the fledgling continental army all the way through Dessert Storm as my cousins are not old enough yet to serve. I am a fiercely patriotic American because of my history with this great land.

I am old enough to remember the cold war but not old enough to have lived through any of the sixties. My parents did live through the sixties, my dad after high school enlisted in the Navy and served a very honorable four years. Once done he went to college in San Francisco and met and married my mother there. He then got a good job offer in Colorado in a small town called Fort Collins and moved there. I was raised in Colorado and consider this to be the only state I want o live in. I was a girl with the Berlin wall fell and still remember the cold war very well and do consider the world less safe now than it was with the USSR as the main enemy.

I have been married for a long time as well, however I do not have any children though my husband and I would love to have at least two. I have four cats, two dogs, an Aquarium of fish and one snake. I am not sure why I have the snake, it doesn’t do much but it was a rescue and is temporary, (as it has been for the last three years). I live in a comfortable house, three bedroom two bath in an older neighborhood (No HOA thank heavens for that) somewhere in Colorado. Alright somewhere in Denver Colorado but that is as far as I am going with that!

I am a Christian and will probably end up putting religious elements into my stories. My faith is very dear to me and though I love to share it with others I do understand that not everyone is interested or wants to hear what I have to offer. That is alright, in fact I try to practice Christianity as Jesus Christ taught it, he invited sinners and none believers to many of his suppers and led by example. That is why I accept those of other or no faith as everyone has to find their own way in this world. It’s how a Christian is suppose to live, with love and tolerance for all faiths, people and cultures.