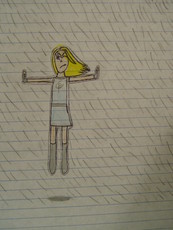 AAAAAAAAAAAH! THE EVIL OLIVES! THEY'RE GONNA KILL US ALLLLLLL!~hyperventilates~-Me

"...Have you lost your half of our minds!" "Dude, I'm not the one wearing a bedsheet."-Danny(ghost half)/Danny(human half)

"Who the heck wished for evil plants!"-Sam

~Sis pokes random plushie~ "No! Stop poking it." "I'm not poking it, it's acupuncture" "It doesn't like it!" "No, look it's going like this." ~sticks out tounge and head goes limp~ "You made it brain-dead!" "It's not brain-dead,it's relaxing." -Gabrielle (my sister)/Me

"I don't knit. The scarves I haven't knitted overflow the cosmos."-Gabrielle

My sister is the source of many good quotes. And some bad ones.