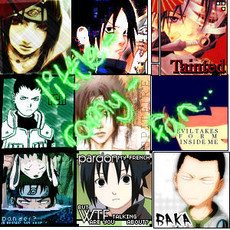 i do take requests

in state of weirdness...its weird wotchin the japanese naruto eps and seeing sasuke go bye bye then wotching the english eps and BAM hes there....*sigh*
BUT wot gets me is that wen hes fighting haku and go's X.X for the time of an hour or somehting, haku says, and i almost quote coz im tired, "he was stronger coz he was fighting to save his friend"
and then sauske goes and says friends r wot keeps u behind and blah blah blah....but tis all itachis fault for coming bak....damn him....>.< (but i still luff him anyways...but still....>.<)
bleh bleh bleh *flaps arms around*
sauske should come baaaaaaaaaaaaaaaaaaaaaaaaak...stupid person....and hav man-babies with naruto......0.0...okay no.....ehehe...ive been goin on about man-babies for so long with my friends...*sigh* i cant hav a sentence without it in there somewhere....e.g:
"hello, how r u 2day, and ooo did u no that this person is this person and this persons man-baby?!?!?!"
person i am speaking 2...."w...t....f? 0.0"
yaaaa i get that a lot...and ooo nu news:
1)im goin 2 an expo in london and gonna c some naruto voice actors hopefully but they havent sed hu it is yet....
2)ive been sketchin out a couple of pics in a skecth pad and its aaaall coming bak 2 me now (stoopid skl makes me not draw well with all the bleh-ness of work >.<)
3)erm....err....i have nothing more 2 say XD

any1 out there going 2 the londonexpo in may?
anybody?
yes?
no?
well..i am...and im cosplaying...as sakura after the time skip...MWAHAHAHA XD
i hav already made the skirt and elbow things
wotch zis spazz...

SQUEE FANK CUUS! Sorry I luv ur poses so much, could I mabeh borrow another? =3

heya how r ya? long time no talkie, oh yeah, do u mind if i borrow ur gaara (hot) pic pose?

You are going to have to give me your messenger again..^^;

Do Ino and Whats his face ever see each other. i bet it was funny.

i dont think so....but it would b funny XD

Hey! The contest results are up!! You can check them on my profie! Thx for entering!!

aww it dances where did youi get that?

ive been gone for a while get on messenger more^^

Hello! I was wondering if you can tell me where you got oekaki? Is it a special type of painting system? Can you download it from the internet for free? Or do you have to buy the system?
Go to page: 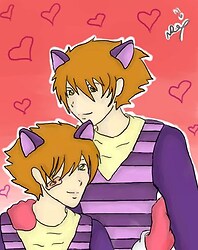