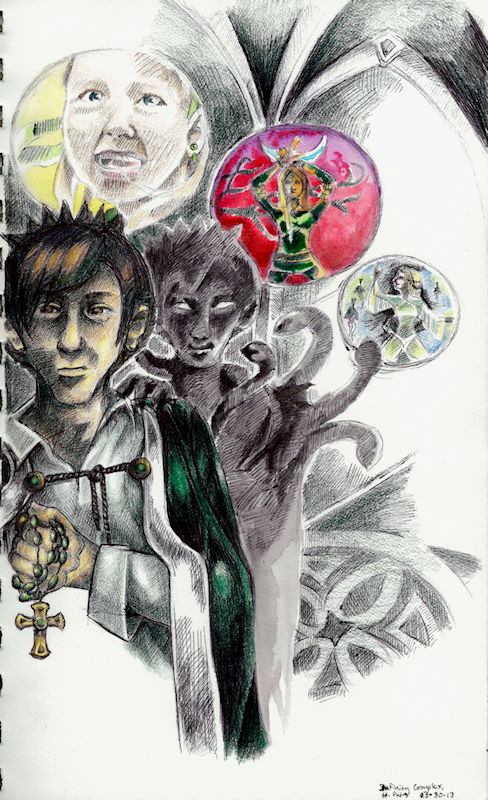 My entry for the St. Patrick's Day context, outfits for OCs.

These are from a story a school friend and I used to be working on. The fellow in the foreground is Job, who moves between parallel worlds using an alien ring. I gave him a rosary partly because the sacrifice/death/redemption symbolism works well with parts of his plot, and partly because, well, it IS a holiday for a Catholic saint, yes?
Job's "shadow", Ash, is dressed as the snakes the saint purportedly drove from Ireland.
The three girls in the background are three parallel world variants on Job's friend Sondra.
And the cathedral-ish scene... again, saint's day, and also it gave me an excuse to play with some almost-Celtic-knotwork in the floor paving. :)

CONGRATULATIONS FOR THE SECOND CONTEST WIN!

Hiatus pattern: finals is coming up, so you will get your St. Patricks Day contest winning badge near the beginning of May instead of immediately this month. However, just know that you name is definitely down as the winner (again)! KEEP IT UP! So far, I believe the only FACers to have 2 contest badges is _ren_tao_fan_ and you!

wow i must say this is really nice! i like your use of symbolism and the fact that your the only one so far to relate the Catholic aspect of st.patricks day into your drawing earns you bonus points in my book! good luck with the contest as this is sure to score good points!

Thank you. ^_^
I figured it was only fair, since the day is named for St. Patrick and all. ;) Glad you like it.
And I don't know what my chances are of winning, but competing is fun. ^_^

well thats why i said i hope you SCORE good, i cant say to hope you win, because I want to win ;3   but i know i wont so heres to a good Score! *cheers*

Here's to some nice points for yourself also, Dream_Fire.

Oh wow. This is so lovely. I love the little (bubbles, portals? either way I likes them.) Awesome job!~

Thanks! ^_^
Bubbles, I guess. At any rate I was thinking of them as more scene-glimpses than things you could potentially walk through or reach through to get to her. :)

Wow its so detailed xxxxx

wow awesome details you might have a chance of winning too^

Oh, this is really cool! The colors are quite lovely in this; I especially adore the shade of green you chose! Great work! :-)