I love to Draw.The ones called angel10,Kittaroo_07, and Karien18 are my friends.I want my art to inspire some one out there like so many others have inspired me.

Hi there my name ia Victoria and nice to meet you ^^

want to be friends

HI!
You have a lovely gallery ^^
I don't know if you're interested in this but...XD
calling all Vic Mignogna/Air TV fans!!

I'm sure many of us are rejoicing that the lovely ADV studios FINALLY got the licensing rights to Air TV (and the movie, and summer specials ^^), and from the moment I found out, I just knew Vic would make the perfect dub voice for the awesome, tragic samurai Ryuuya.

And so, as a loyal member of Vic's fanclub the Risembool Rangers I'm making it my mission to gather as many people as possible who would like to hear Vic as Ryuuya and present him with a fun little petition stating that all his fans would love for him to audition for the part!! ^____^ (if he wants to, of course ;P)

However the casting for Air will be taking place pretty soon as it is being released mid august, so if we want to make a difference we have to hurry! Vic Mignogna is a celebrity among Anime Dub fans, best known for his leading roles in DNAngel, Fullmetal Alchemist and Macross which won him the title of Best Actor at the American Anime Awards. If you would like the Air dub to be as stellar as it can be, with Vic as the gorgeous Ryuuya then please send an email with the subject line 'I support Vic for Ryuuya!' to generalpammy@yahoo.com telling her you support our cause! (You don't have to be a Risembool Rangers member, but tell her if you are so she knows that many Rangers are also on board with this ^^v)

Thanks for your time!

lol n.n<BR>Not only do we have all that stuff you mentioned in the "Dance Party" picture in common, but we have te same birthday too! lol

Oh... I don't suppose you have any finnish relations? I mean you name, Kakkara. 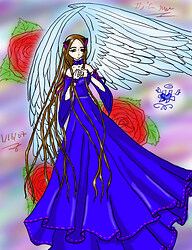