Member Info
Well hey, I haven't updated in AGES!!! I think I'll redo my profile because i have time!! lol!! Who needs sleep when you have a computer with internet in your room!! AHAHAHHAHAHA!!!

Anime Movies:
Pompoko, Millenium Actress, Patlabar 1+2, Spirited Away, I Can Hear the Ocean, Totoro, Grave of the Fireflies, That Slayers movie with the tentacle monsters...a few others

As you can see, I love Japanese anything and everything. I'm a total otaku and I do anything I can to get more manga and anime as well as Japanese stuff. I've been to a few anime conventions(Ohayocon 2004, Colossalcon 2004, Lakewood Library Anime Day 2004, Ohayocon 2005, Harucon 2005, Colossalcon 2005, Ohayocon 2006, Harucon 2006, Colossalcon 2006).(If this doesn't say Ohayocon 2006 after it's happened then I just haven't updated...) I love going to the local Asian food store. I buy my Pocky and Pepero there. I also get my Japanese gummy candy there as well as my Ramune. I also get some Ramune at Suncoast. I might be able to get some things online eventually... I've got a butt load of anime and Japanese stuff. I've got posters, keychains, plushies and even empty card packs!! I'm slowly drifting away from being American culture...But I think that's a good thing sometimes.

I want to attend Case Western Reserve and major in Japanese. I hope to end up teaching English in Japan. I'm not really sure I want to move there because everything is rather expensive there and I'll be away from all my great friends here. I'll miss going to American anime conventions. But that will be decided when the time comes around. If I stay in the US I want to teach Japanese at my current high school because it seems to be in demand and I think by the time I'd graduate it would be even more in demand. I also am hoping to go to Japan next summer, I don't think I'll be able to afford the study abroad...so I think I might just go for a bit of after high school freedom even though my mom doesn't want me to go alone.

Thank you I appreciate it, I just dont understand what makes people think its okay to say those kinds of things to other people.

Just wanted to drop by, see your gallery. And I like your stuff! Your style is so nice and clean and fun to look at! Yeah you rock!!

Ok bye and keep up the good work!

and i do have a tablet but i only use the mouse ^.^

Thanks. Yeah I remeber that part. I have all 10 books. I wuz really upset that it ended already. I love the ending? Have you gotten that far?

I saw your name and I just had to check out your pics! My favorite is your sexaaaay legolas piccy. Well, naturally, he's my fave LotR character! HOTNESS!!!!!!!! Just so we're clear...HE'S MINE!!!! MINE MINE MINE MINE MINE!!!!!!! lol

Hi ^-^ thank you for your comment for the colouring i used pencil crayon hehe..^-^and pencil for the shading part(Shorts)

OMG!! It is based off of Travis' pic! I wondered if anyone would notice becuase when I first saw Travis I thought that he was so Sessy that it was unbelievable!!!
Go to page: 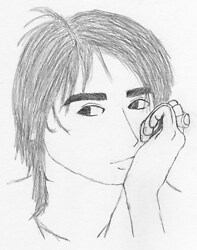