Richard Michaud is a multidisciplinary artist based in Stamford, Connecticut (United States). He has started his base of operations since 2004 working for American Comedy Network as a Flash Animator working on two featurettes: Last Politician Standing, Dan's New Job.

After completing his task in November, he would then be hired by Alcone Marketing a month later to work on an advertisement campaign for Seagram's Gin. During that same year (2004), before Alcone and ACN, Richard was commissioned to work for Claudia Moreno-Toscané, a French modeler/photographer. The project was Sensual Muse, a project of using the muse (Claudia) in a number of fantasy/erotic drawings.

Simultaneously, he also worked on HELLBLAZE with White Helix Productions (UK), a Half-Life II game mod as a Promotional Graphics Artist (Contractor). In 2005, while in Pittsburgh, PA, Richard found his love (in the form of a museum) working at The Warhol Museum. He would be there for almost 2 years before returning to Stamford in 2007. During that time, he also worked with Four Paws Pet Sitting Service as a logo designer and numerous other independent projects.

Returning to Connecticut, he would then continue to pursue his goal as a freelancer/contractor by working for BIG Huge Games as a Concept Artist for an unannounced Nintendo Wii title.

Now, he works simultaneously for both The Reveal Word Christian Center as a Graphic Artist/Designer in his hometown and at WET Productions in New York as an Illustrator for an upcoming play.

OMG! Your pictures are amazing, BRILLIANT even!
I LOVE the AVP pic and Metal Gear Solid pics!

You have great skills.

Ur art is awsome!

I really love your work! Keep it up ^^

you are an amazing artist,i took a close look at er "Da Ji" piece and its flawless!i am definitely a fan of er work,and would love to see more 8)you great care in er work and it shows 8)

I am surprised that you only have 7 pics up but oh well keep it up!
Go to page: 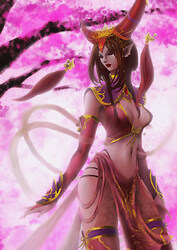