1. 4-30-09
Sooo...I've left my Drawn to Life obsession for Keroro Gunsou. As is revealed by my newest artworks. And my featured picture. :)
Working on several requests for another site right now...

2. About Me
Name: DragonGirl/DragonWingedGirl/Supreme Empress DragonGirl
Age: High School
Hobbies: Writing and Drawing, mostly. I love playing video games and I like to sing (I think I'm terrible though). Acting and music are also some of my favorite things. But yeah, mostly writing and drawing.
I play the viola in my school orchestra and I'm auditioning for the youth orchestra here.
I tend to obsess over things and I'll write and draw nothing else for weeks. :P
Current obsession: Drawn to Life
I have a thing for the villains and tend to write about their history/backstory/motives/what they're doing during the game/book/movie/etc. Mostly games, though. I like to draw them too. Expect to see lots of Wilfre (Drawn to Life), Shadow (Zelda), Bowser (Mario), and other villains in my art and writings.
The cat at the top of this page is fixed, finally. :D
ICH SPRECHE DEUTSCH!
(I speak German!)
I can't spell anything right on the first try. xD My drawing style varies from cartoonish to realistic to manga-style. My writing leans towards the descriptive side, and I like to think my characters/characterization is one of the best parts of my writing.

3a. Drawn to Life
3a.i. Pictures
-Jowee--Lineart
-Exhaustion--Lineart (Chapter 2 of Shadow)
-Mari--Lineart
-Jowee, colored pencil--colored pencil (duh).
3a.ii. Stories
-Shadow--Like I said above, I have a thing for villains. However, this is the first time I've written about one from a completely unsympathetic standpoint. Even writing in his head, I hate him. I don't know how he lives with himself.
-The Inventor's Son--A little oneshot about the life of the inventor's son. Mild spoilers (I hope they're mild).
4. Random Stuff
Um. I don't have any right now...

Many thanks for faving the Wilfre pic! :)

Only what it deserves. :3

Hi, sorry it's been such a long time since I contacted you.

I finally got round to drawing that second Wilfre pic I've been meaning to do; you can follow the link if you want to have a look:http://www.fanart-central.net/pictures.php?pid=750646

I've got a little more free time now, so if you need anything drawing, I'd be happy to help. :)

Thank you! ^.^ It always means a lot to me when people leave a comment. :)
I might get more comments if I branched out into other fandoms...>.< I always feel insufficient drawing any of the other things I play/watch/read/whatev though. xD

Hm?
if your talkin about you mean you'd
probably meet more ppl if you drew pics of many dif things
rather than just one thing,
or you want to get on more fansites?
Srry Im slow... >.<
anyways your pics rock an I know what you mean 'bout friends
and comments, I decided the best way for me to branch out
would be to view many profiles and meet new ppls ^^

Oh, no, not slow. xD No one understands anything I say--I'm too energetic and ADD to make sense. :P I mean drawing pictures from other shows/movies/game/books would help me get more comments, since I love them so much. :P But I never feel good enough drawing most things.

OH! ^^
you should draw what you wanna draw though
when you want to you know ^^
I think my prob is I have interest in games and movies and
everything ppl find out dated, and when I switch my faves
ppl I used to talk to thnk down on me, but Im just
happy to be drawing you know ^^
wich is why I signed up ^^
Ps. I used to draw tons of drwn to life stuff, I Still think it rocks ^^

I'm glad some people on this site at least like the game. I've heard such awful things about it when I asked if there were any fans on other sites. :) Sorry my Raposa look so strange, xD

Nah!
They look Awsome! ^^
but thats not good to have heard bad things of the game
I rly like the game!, But I Know what you mean, My
friends all said it was lame >_<
but I still Liked it
Right now i'm into the sly cooper games ^^ but its hard to find fans of
sly that still come online these days you know ^^

Thanks. xD You haven't seen my terrible -attempt- drawing of Isaac, he looks like a really dorky Harry Potter with ears. xD I guess Jowee's okay though, and I've practiced Wilfre enough that he turns out okay...xD
I am absolutely sure I would LOVE that game if I ever played it. But I've always been a Nintendo girl (I think I was six or seven when my aunt gave me a GameBoy Color and Super Mario Deluxe xD xD) and anything else confuses me terribly. ;-;

LOL ^^
theyre great
and I was raised growing up with PS2
but finally got a gba at age 11
from a friend on a field trip, Thats where I got my first
pokemon game as well ^^
Then at age 12 I got my first DS light so, yeah ^^
since than Ive been playing lots of those games, But one day relived my past when I descovered sly 3 in the store one day ^^
it says it all in my blog ' Hooked on this Game' ^^

Ha, that sounds fun. I've never quite gotten the hang of Xbox or PlayStations controls :/

No--I should really be in bed now o.o
Looks like it. I wish I had a way to play it.
Erk, not much. Gotten more comments in the past hour than I have since I join the site, though, which is nice. xD

Hi, many thanks for the comment, and for faving me! That means a lot to me, really.

You seem very talented, good luck to you! :)

Oh, you're sooo welcome. Your talent is simply amazing. That's absolutely my favorite picture of all time, by the way. :D
Thank you very much, too. :) I'm not the best artist I know by a long shot, but I do what I can with the talent I have.
I'd like to invite you to my Drawn to Life fansite, Sunlight and Shadows. It's not that interesting yet, but I've been working hard on it... if you're interested in joining, it's at http://drawntolifefans.webs.com ...:)

Thanks, I'll have a look when my computer's not acting up so much. This machine's a total nutter, sometimes it's tricky getting it to stay online, but I'll definitely look when I can. :)

Ooh, I know what that's like. xD I hope you like it when you have the chance to check it out!

Hello! ^^
Yeah, I love Drawn To Life. Raposas are SOOOOOOOO adorable! ^w^
A DtL website sounds fun. I'd be happy to join. ;)

so when are you gonna start submitting pics?

As soon as my scanner works. xD Actually, I think it's set up now, I just have to finish my picture and figure out how to use it. xD

okie...cool. check out my gallery please

Your artwork is really good! :) I posted a picture, by the way, if you wanted to see it. :P

Hm, like the fandoms I draw and write for, you mean? Well, I like a lot of video games, mostly--Mario, Zelda, Drawn to Life. I tend to get hooked on one particular thing and write/draw nothing else for weeks (Right now it's Drawn to Life :P). I also like lots of books and a few TV shows and movies, but I don't draw those as much. I'm a better artist than I think I am though, so I try to draw a lot. :)
Go to page: 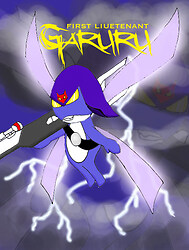