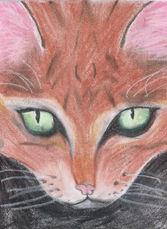 So great to hear from you again. I pop into your profile every now and again to see if you have anything new, but since your scanner's dead, I guess I'll have to wait a bit, eh? Hopefully not too long ^_^ Anyway, thanks so much for your comment on my Ed pic! You know, I never used to good at drawing people at all! Seriously ... I was terrible at it! But I never gave up and eventually found my niche "anime style!!" so there you have it ^_^

Ravlorn'Gel's having fun playing a part in an RP I'm in at the moment. He says to say hi to Ebony and Rascal for him ... and of course, he also says a big hello to you, too ^_^

Spirit!!! So great to hear from you again! Thanks so much for your comments! ^__^ You should definitely try and upload some more pics into your gallery - I'd love to see some more! Glad to hear Rascal and Ebony are doing well. Ravlorn'Gel has been keeping himself busy (being a golden dragon he enjoys metamorphosing). He's managed to take on a human form! Although he says it feels uncomfortably fragile. I wonder what else I can coax him into transforming into ...? lol.

Hey thanks for your recent comments! It's great to hear from you again! I wondered where you have gone off to. Anyway nice to see you're back and once again, thanks for your awesome comments! I've been coming on and checking every once in a while to see if you've put new pics up. Oh, I hope you do - I always enjoy looking at your pics ^_^
*Gel and Alora say a big HELLO to you Ebony and Rascal*

Billy was happily riding his bike home from school on a sunny spring afternoon. As he was crossing the street at a busy intersection, a truck passed by at high speed. Billy pedaled as hard as he could and barely avoided certain death. The driver of the truck, however, not being able to see, crashed into another car. He found that in the truck, was his uncle who died. Then, it started raining. Billy pedaled faster with tears in his eyes, trying to get home. In minutes, he was soaking wet. The clouds covered the sky and it grew dark. Billy had to get home to tell his family of the horrible news. He was lost. He found himself in another city. He felt a painful slash at the back of his neck. He had no choice but to leave his bike where it was and limp his way home. So Billy, with his uncle dead, his neck bleeding, and the loud rain pounding on him, making his wound more painful with each drop, was crawling on the sidewalk and tried to look around to see what attacked his neck. To his surprise, it was Godzilla! He was destroying the city! He heard police sirens, gunshots, helicopters, and just wanted to get home. The next thing he knew, aliens came from the sky and were abducting everything! Billy felt himself rising from the ground in their tractor beam. When he was inside the saucer, he was strapped to a metal bed. The alien standing before him was about to take out his brain. After his tears dried away, he could see that the alien was his dead uncle! The last thing he remembered him saying was..."Drive safely." Then they took out his brain. This is a true story. Billy joined their squad of Godzilla-freeing, brain-sucking, alien Bigfoot creatures and his parents never saw him again. Take heed, it could be you next. Oh yeah, and his parents commited suicide. This is a true story.

Read this and pass it on to 15 people.

If you complete this small task, Billy will send you a slice of pie in the mail and a free
Godzilla-freeing, brain-sucking, alien Bigfoot creatures membership card. Do it for Billy.

Hey, I just now got that comment on Nilra the Hedgehog, on ms paint(ty for the comment). Her name doesn't really have a special meaning, but I had made a character before her and named her Arlin. I really liked the name Arlin, so I flipped it around, and TADA!! I got Nilra. After that the name stuck. Anyways, I like your art. I think you did really good on your avatar. 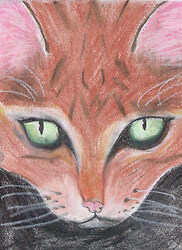